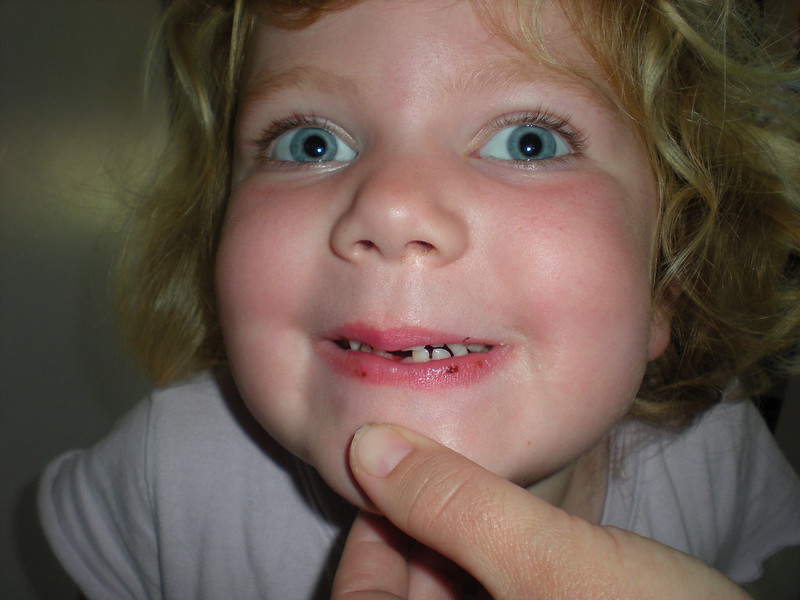 This year, for some reason, my students and I have discussed how much money the Tooth Fairy leaves. This has been shocking as some students report $20 per tooth. I shared that I used to be happy with the dime the old lady left. We did some multiplication. We figured there were 32 teeth times $20 for $640. Compared to the $3.20 I earned, we all had dropped jaws. We have since learned there are only 20 baby teeth. Nevertheless . . .

Last night Beetle announced she had a tooth loose. I suggested it was a little early for her to lose teeth. I was reminded she had teeth early. All evening she told us about her loose tooth (and bump on her head. She was out-of-hand at Uncle Bob’s and ran into a door.).

Well actually (inside joke; Beetle says this all the time), today Beetle ate a granola bar and out came her tooth! She was so excited! She immediately called Aunt Kitty to tell her. A plan was hatched to spend the night at Grammy and Poppy’s. she placed her tooth in the box that Aunt Patty had given her. All day long she carried the box.

We all met up in Vineland. I hauled over the blow-up mattress and the princess pillow. Beetle was so eager for the Tooth Fairy, she put herself to bed before 6:30. If only she would do that nightly.

We discussed the expectations the Tooth Fairy has. Beetle needs to be a good girl and not cause a fuss. We reminded her that the Tooth Fairy does not always show up the evening the tooth is lost. We also discussed the recession and how the Tooth Fairy had been affected by it. Along with that, we explained that we thought the Tooth Fairy gave a little more for the first tooth, but could not imagine a normal tooth would be more than a dollar. Grammy suggested $0.50. I kept silent about how nicely dimes shine.

Today was one of those special days having children. Watching Beetle’s enthusiasm over her tooth was infectious. We really enjoyed watching her. We hope the Tooth Fairy remembers to take the tooth this evening and return it to us for safe keeping.

2 thoughts on “Time for the Tooth Fairy”