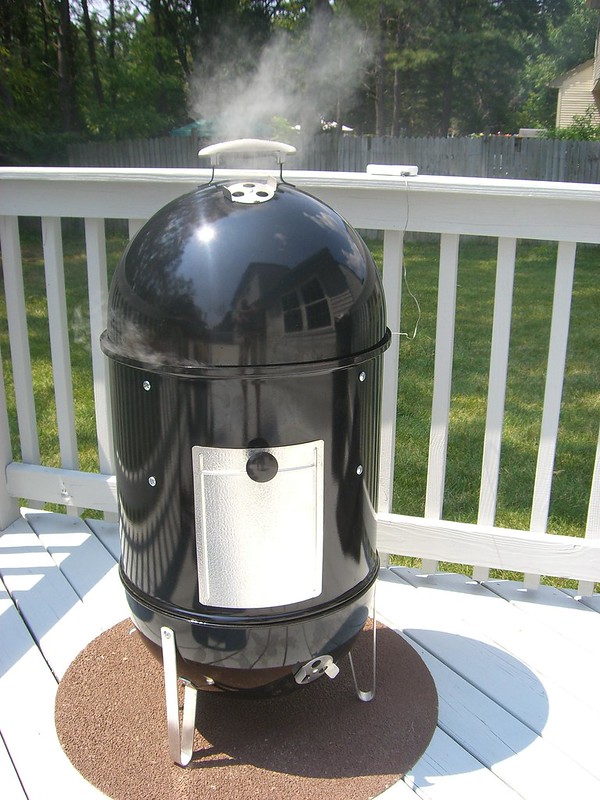 On one of the boards I read this question was asked recently. It seems that as a man, barbecuing should be a natural offshoot. Alas, my current fetish with barbecuing is a twisty adventure that still has a lot of story yet to come.

In my youth we had a flat red charcoal grill. I imagine it was purchased at Sears, as that seems to be where we purchased stuff. I recall lighter fluid to torch the charcoal. I have a couple vague images of burgers and hot dogs, but I suspect we did not use it much. After the porch was removed for the living room, I recall the picnic table being in the side yard. That is where I remember seeing the grill. I think it was stored in the garage folded up.

A little later came the hibachi. It was cute and I recall my father’s pleasure in it. It was small. I know it was used, but I cannot recall any food that came off it. I should have rescued it when my folks moved south.

Later my folks purchased a gasser. Dad grilled steaks and burgers. I helped out. I didn’t know what I was doing and I know I torched a few things.

While I lived in Boston, Mom bought me a table top grill with a small gas tank attached. I used that a lot. Swordfish was a staple on that grill. I have a wonderful recipe where the fish is wrapped in corn husks. Steve and I grilled steaks. At the house in Watertown, I recall grilling on the back stoop. Eventually, the bottom rusted out. I did keep it outside. It was a fine little grill for someone who moved as frequently as I did back then, often with limited space. At the Burlington house, we had a grill, but Greg and Ford manned it, not me.

Also, for about half the time I lived in Boston I managed a Tony Roma’s restaurant. Roma’s was known for its baby back ribs. Man, did I think they were good. We cooked them in the oven for several hours with liquid smoke. During service, the racks were sauced and finished on the grill. The meat fell off the bone. We moved about 75 cases, I believe, of baby backs a week. In addition, chicken, St. Louis and Carolina style ribs, and beef ribs were staples.

When I moved to Millville, I did not even have a patio, so grilling disappeared from my life for a while. I did frequent Fat Jack’s while it was in business, but that too went away.

When Gert and I purchased our home, one of the first things we bought was a Char-Broil grill from Home Depot. He had oodles of gift cards for HD and we spent every dime (and then some) when we moved in. Over the next several years, I grilled plenty of burgers and dogs, an occasional steak, etc.

I like to cook. At one point I fancied attending the Culinary Institute of America. I passed to become a teacher. The enjoyment of cooking has continued. I read a lot and as I did, I began reading grilling and barbecue material. Inevitably, I kept reading about the typical backyard griller: the guy who cranks up the fire and chars everything. That was me!

Over time I began to get the idea that there was a lot more to barbecuing than just turning on the gas. My mother gave me a stand for beer can chicken. I made a ton of those and had gotten pretty good of them. I began searing fillets. About two and a half years ago I began reading in earnest about grilling. It wasn’t long before I set my sights on smoking. Smoking definitely is up my alley: a specialty with big payoffs. I also, I’ve noticed, enjoy long cooking methods. I am not certain why. Another thing I am cognizant of is that I tend to pick up hobbies, buy all the toys for them, and then move on. My basement is a testament to those characteristics. I made myself wait a year to ensure I was serious about this. I was.

I continued to read. About a year ago I really researched what kind of smoker I wanted. Seeing how this hobby is no different than others, I promised myself not to be competitive (no competitions for me) and understand I am a home cook, therefore will not go after the trailers, despite thinking they were really kewl (I still do).

My vision of smoking is with an offset. I was zeroing in on the Char-Griller with the side firebox. I priced one at Lowe’s. I came home to check prices. Then I did something I am grateful for having done; I asked myself what people were happy with. This new perspective found me abandoning the Char-Griller. While it looks like a classic smoker, it is highly inefficient. Mind you, plenty of folks use this smoker and cook fine food on it. All have modded it. Many speak of regrets, however. Those who have a Weber Smokey Mountain cooker, however, have no regrets. That is what I found on site after site. In the inexpensive line, the WSM is as solid as it gets. When I found the Virtual Bullet site, I knew I had found heaven. I ordered it and have not looked back.

Like anything, there was a learning curve, albeit, it went pretty smoothly. My first cook was a Boston butt. It was a bit overcooked but still tasty. The first ribs I smoked were good, but I did not care for the rub. Since then, I have perfected my pulled pork. My mother will be pleased to know that. It is such a hit I get requests for it all the time. Today I smoked a butt for the ladies at work. That’s right, my colleagues are hooked on my butt. Ha!

Soon after I purchased the WSM, I had trouble with that ol’ Char-Broil. One side was not lighting. While I had tolerated that for a while as the beer can chickens cooked indirectly and there was enough room for a few burgers over the direct flame, it was time to address this.

I went to Home Depot to purchase replacement parts. I figured this was a project I could actually do. I went down the aisle and picked up all the parts I needed. Then I did a price check. I was up to about $85 in parts. A brand new Char-Broil grill (the low-end like I had) was $100. That hardly seemed a good use of money. Sitting nearby was a Weber One Touch Gold charcoal kettle. It was the display model; there were no boxes on the shelf. I spoke with the service rep. He was willing to take something off the price, plus it was already assembled. I came home with a new grill. Now I had two Webers.

The last year has been wonderful for barbecue and grilled food. I have learned a ton. New foods such as Atomic Buffalo Turds and fatties have been added to the menu. I have no qualms cooking turkeys any longer. And Gert’s love of bratwurst has me thinking of adding sausage making to the repertoire at some point in the future. I really wanted to add a rotisserie this summer, but the one I want seems not to be made any longer. I am not willing to change my desire, so have put that on hold.

Gert gave me an early present (Father’s Day, birthday, or anniversary, I do not know): Raichlin’s How to Grill. I had checked this out of the library last summer and liked it a ton. It was on sale at BJ’s. I have thoughts of blogging about what I learn as I work myself through it.

Barbecuing is a great home hobby for me. I look forward to many years of learning.

Food is good. Food with gadgets is fun. Food that keeps the learning process moving is stimulating. Food that is requested feeds more than the tummy. 🙂

2 thoughts on “How Did You Get Involved with Barbecuing?”

People judge you by your performance, so focus on the outcome. Be a yardstick of quality. Some people aren’t used to an environment where excellence is expected.