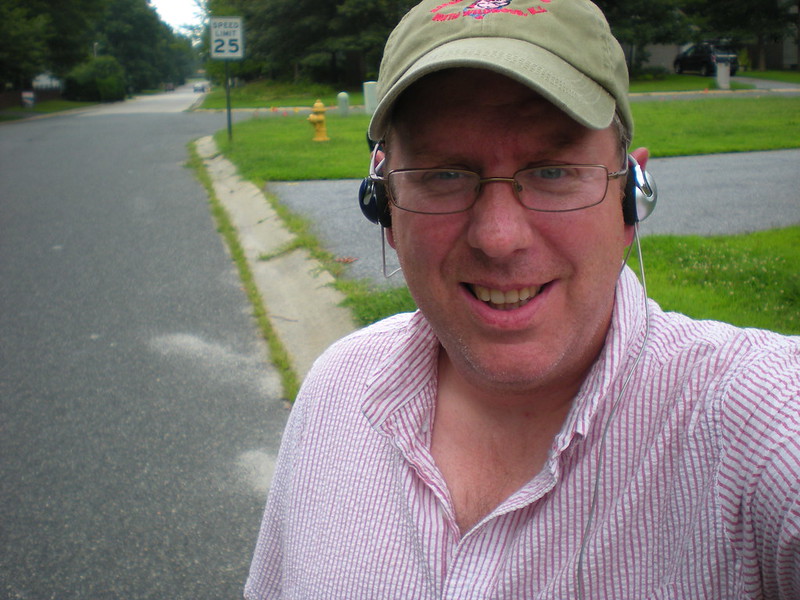 Hole 1
This was at the very end of Geissel Drive at the edge of the street and the small patch of woods that separates the residential street from Ingraldi’s Farm.

What a great way to begin this course.

Hole 2
This hole played in the middle of Cedar Road across from what is now Thunderbolt Area Federal Credit Union. It was closer to the north side of the road. The sign for the Flight Line restaurant was nearby.

Hole 3
This hole played in the parking area of the former Dallas Airmotive business that left town a few years ago. Interestingly, nearby on a stretch of grass was a horseshoe game set up. The horseshoes were propped up on one of the pegs.

It was really humid out. Just as I holed this one, a huge boom of thunder caused me to jump. I wasn’t certain I would finish this course in one outing at this point.

Hole 4
This hole played back toward home. After the scary thunder, a huge bolt of lightning cracked nearby. The wind kicked up and it was easy to see the dark clouds rolling in. I figured I would keep on playing as I would be close enough at this point to run for shelter when the rain came.

This hole played behind the on the cul-de-sac with the basketball hoop. This is next to the two barking dog house.

Hole 5
This was holed outside 8 Porreca Street. This was the first of four holes along this street.

Hole 6
This was holed outside an unmarked house (the number was not on the mailbox). I believe it was 16 Porreca Drive, but I may be mistaken. The house was white with Carolina blue trim. The trim was rather bright. Of course, the house to the left of it was Carolina blue with white trim, so I suppose it could have been worse. 😉

Hole 7
There was another hole, dashpoint, Minute War location, etc. near here that I played. This is at the fence where David (really just a small street) turns to a private drive. This looks out onto the horse farm back here. It is beautiful here.

Hole 8
This scored outside a yellow house across the street from hole #6. The owner of the house was in his yard, so I passed with trying to ero this out and took the quick stop distance so as not to have explain myself. 😉

Hole 9
This was scored just south a foot or two of the median at the entrance of Sherwood Forest II.

Gert and I looked at a house here when we were house hunting. The owners had not done a good job maintaining the house. They were smokers and I distinctly recall the gray laced curtains. They had re-painted a bathroom deep purple and left the roller in the tray. It had dried in the paint. Yuck!

Hole 10
At 455 Lance Drive. This street was still being built when we moved out this way. There are a few nice homes, like one directly across the street from here. Gert would have liked a Cape Cod.

I spotted a couple people distributing lightbulbs as part of Project Porchlight when I headed here. One of them posed for me. I saw him later on the course. He asked me what I was doing. I explained geogolf and the 12 of 12 project. He asked if I wanted him to pose again. Sure thing, buddy. 🙂

Hole 11
This was scored at the property line in the backyard of the house that actually faces Geissel, but I was on Lance. This is the house that has all of the children’s toys and apparatus in the yard but no fence.

There is a concrete marker a yard or so away to indicate the property line.

Hole 12
As I headed to this one, a very upbeat Playin’ in the Band came on. There I was boppin’ down the street with the headphones on singing along. I am sure I was a spectacle.

This hole played in the middle of Cedar Road. I scored it from the edge of the road so as not to have to play Frogger with the traffic.

There was a rather large dog in the yard of the house on the corner. I do not think he was leashed, but he minded his own business.

Hole 13
This played at the house that is for sale. It is tan/brown with green trim. This is along the stretch of tar sidewalk that is uneven, cracked, and in poor shape.

Hole 14
This scored outside what we affectionately have dubbed the Red Roof Inn. It’s a house, but with a lot of red trim, including the roof. The yard is always in tip-top shape. The owner is a local celebrity of sorts.

Hole 15
This is scored outside the Dods’ home. I only know the name as they have it on the mailbox. We used to know the family who lived here. We had looked at purchasing their home prior to their move here. Unfortunately, they divorced soon after they purchased this home.

Hole 16
This is back where I officially began this course. It was here that I ran into the Project Porchlight guy again. I should have been able to zero out here, but was chasing my tail and just accepted the five meters.

I’ve always been amazed at the addition to the nearby road sign. I am certain a juvenile did that.

Hole 17
This was a house and a half from hole #1. Across the street is a yellow Cape Cod I have always liked. It’s big. It looks like it needs a little work now, but don’t all of our homes? The house right before this has a skateboard ramp stored on its sidewalk.

Hole 18
Outside 1608 Ash, which is a white house with black trim. This house is actually on the corner of Ash and Peach.

On my way back home from this last home, the sky opened up. It has been raining ever since.

Reject your sense of injury and the injury itself disappears.