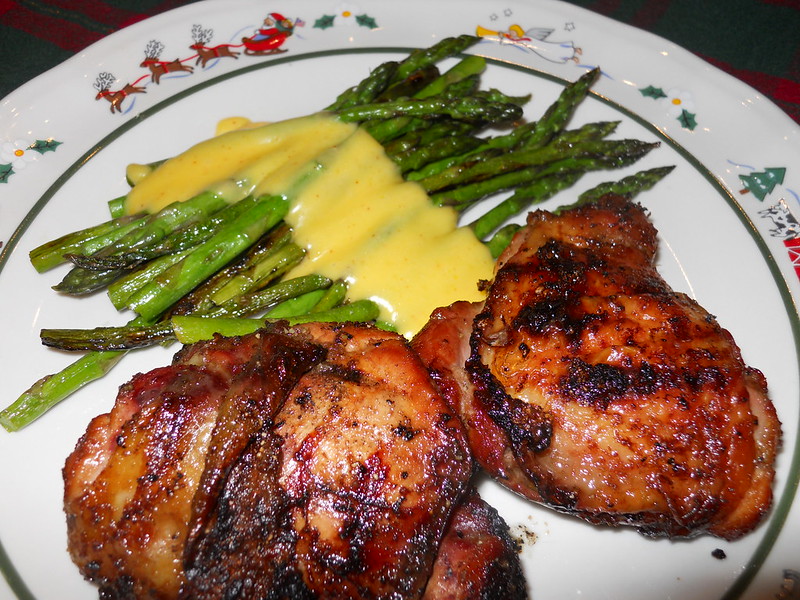 When one has time, work improves. With another day off from work today I found myself with a little extra time on my hands. I decided to treat Gert to a nice lunch.

We are big fans of Roadside Chicken. I first made this in August 2008. I’ve come a long way with my technique since then. It’s not surprising as we have this weekly for long stretches at a time. With the busyness of the season, it had been a couple weeks since we had this.

One improvement I have made is to marinate the chicken for a longer time. A couple hours is not enough for us. Twenty-four hours is better, in my opinion. Today’s chicken had marinated slightly longer than a day. I whipped up a batch of the basting sauce (I still want to know if it is safe to save this from cook to cook).

With all the snow from the weekend, I had to shovel a path from the house to the grills. I had done this on Saturday, but more snow fell and it was as if had not been done. I fired up the Performer with lump and waited for the grill to heat up. On went the chicken . . . indirectly. That’s another change I have made with this since I began. I usually cook the chicken indirectly until the pieces (we like thighs, but any chicken parts work for this) are cooked through. At that point, I place the chicken skin side down directly over the coals to crisp up the skin. The chicken is ready to go at this point.

Last evening when I was in the market, I saw some beautiful looking asparagus. When it is thin, we’re in. I picked up a bunch. Usually I marinate asparagus in Italian salad dressing. We apparently are out of it. No bother, I sprinkled some salad oil over the vegetables and let it sit while the chicken was grilling.

When the chicken was done, I put on the grill pan, and placed the asparagus on the pan. The grill was very hot at this point. I kept turning the asparagus, but the oil would cause flare ups, so I would close the lid. It was this dance for several minutes until they were cooked through. I brought everything inside.

Yesterday I made some cookies that required just egg whites. I saved the yolks. Taking four of the yolks, I squeezed in the juice from half a lemon and began whisking. I put on a pot with just a little bit of water and then placed the bowl over it as a double-boiler. I had melted a stick of butter. Slowly the butter was added to the eggs. One must keep whisking to keep the eggs from cooking through. You would have scrambled eggs at that point. I pull the bowl off the heat quite a bit to whisk and then toss back on the pot to cook. After several minutes, you should have a creamy mixture. At that point whisk in a dash of salt and cayenne pepper. I took mercy on Gert as I would have used more cayenne. There wasn’t the kick that I am accustomed to.

Hollandaise sauce is something that I have perfected over the years. When I was 18, I waited tables at the Mad Batter. All waiters began on breakfast service. The restaurant was named for its famed breakfast. I kept selling Eggs Benedict and they were gorgeous. On my first day off, I went out to breakfast at the restaurant. I ordered the Benedict. I have been in love ever since.

When I moved out on my own making Hollandaise became a regular gig for me. It is one of the dishes that built my culinary legacy. This year I was reunited with a teacher friend of mine from early in my career. As we have caught up and reminisced about those early days, she recalled fondly coming over for breakfast as payment for watching ‘Nado during one of my trips. She raved about the Hollandaise. Awwwww . . .

Anyhow, once plated Gert and I sat down to a very tasty lunch. It’s too bad the children are so picky.