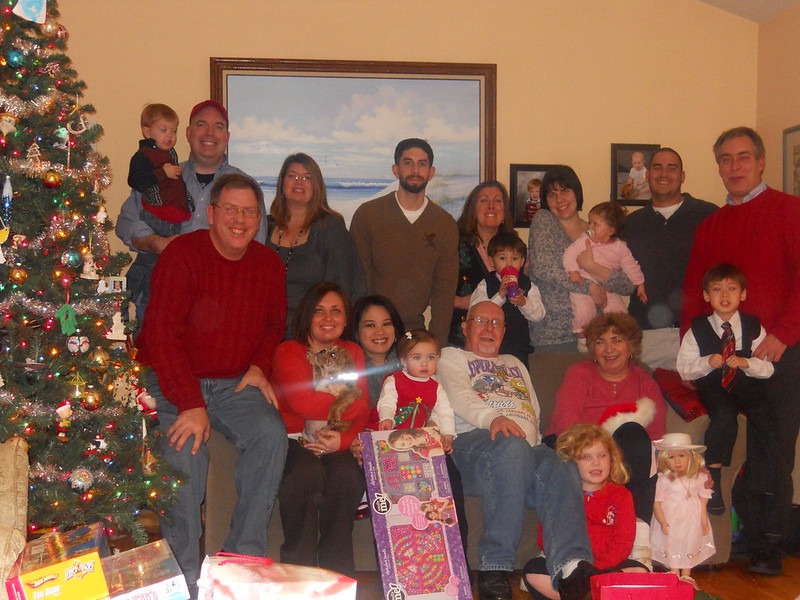 Our Christmas Eve party is growing ever more popular, at least in our own minds. The Owens family ramps up for this annual event with great vigor. Despite the promises of scaling back, organizing, and generally not letting this event become a chore, we find ways to add on and make it more work every year. This year we added a standing rib roast and chicken wings. That allowed Daddy to concentrate merely on those items and Mommy could continue shopping for the event.

In keeping with not being able to make plans, there seemed to be quite a bit of confusion as to what time the event was to take place. I take great pride in knowing the roast was being served as Grammy and Poppy walked in. Such precision could never be planned by lesser mortals.

Originally, the roast was going to be smoked. When I went out to start the fire, the bottom of the smoker was a solid block of ice. I did not want to go tromping into the woods to dump all this. I decided to cook this in the oven. I decided to cook this medium to medium-well given the in-laws penchant for “done” meat. I successfully achieved that. Next time I am going to go rare medium-rare and then overcook the other pieces in au jus for those who want them. Even so, the meat was delicious. I seasoned it with 1/3 cup each of Kosher salt and black pepper. I reversed seared it at the end. The crust was excellent and commented favorably by others.

What is a rib roast without Yorkshire pudding? Making this was a lot less stressful this time knowing what to do. Even so, I messed up the first batch by putting too much flour into it. I quickly made another batch to rest at room temperature until it was ready. Unbeknownst to me, I was being tested. Apparently, Grammy (Poppy’s mom) was known for her Yorkshire pudding. The family had not had any since she passed in the early 1990s. Apparently these puddings were up to snuff as there were many positive comments.

The guest list included Grammy and Poppy, Aunt Kim and Uncle Mike, Uncle Jesse, Aunt Kitty, Aunt Tracy, Uncle Bob, Sean, James, and Ellen. Aunt Jill, Uncle Frank, Timmy, and Katie did not come as Katie is so young and they aren’t traveling yet. Unfortunately, Katie was admitted to the hospital last evening with an upper respiratory infection. She will be okay, from what we understand, but she is going to be in for a couple days. Also, Renee, Chris, and baby Natalie came.

We had a good time. We had a makeshift redneck refrigerator as the snow worked great for keeping the beverages cold. I also made apricot sriracha chicken wings outside. Yummy!

Just as the food and drink flowed, so did the presents. The children had presents from all the aunts, uncles, and grandparents. Fritz was initiated into the Robertson family by receiving a blow up doll. No, not that kind of blow up doll, rather one of those punching bags. I had a Bozo the Clown one when I was a boy. It was traditional for all the Robertsons to receive one on Christmas. Aunt Kim and Uncle Mike gave Fritz a Washington Capitals bag. They had taught Fritz the “Let’s Go Caps!” chant long ago. They also brought their 11-week old bull dog named Ovie (after a Washington Capitals player).

We had a splendid time. Eventually, like all good things, the party ended. We said our goodbyes. The children put out the traditional cookies and beer for Santa. Then they went to bed. Kitty, Mommy, and Daddy then wrapped presents before going off to dream of sugar plums.

It was an eventful day. We enjoyed it, but now it’s time for slumber.