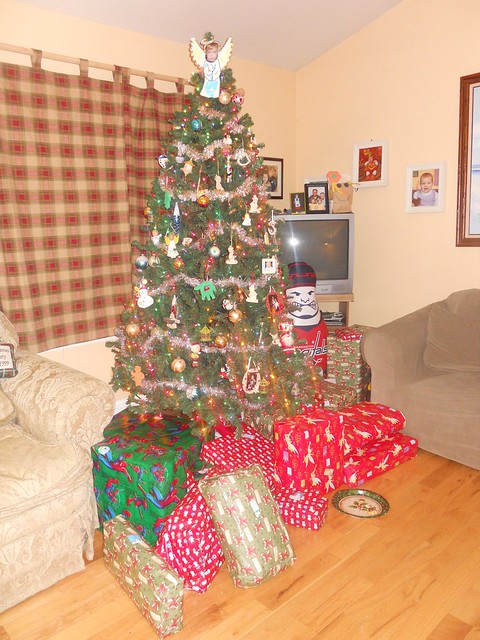 This morning came oh too soon after last evening. The children were ready at 7:15, which was a couple hours too early. Nevertheless, we rose to the occasion and began the holiday.

It’s funny how traditions are built. Somehow a few years ago filming Beetle descending the stairs has become “a thing”. So everyone assembled at the top of the stairs and a very groggy Daddy went down to capture the entrance. We keep prepping Beetle to repeat her “I love my stock” line, but it isn’t the same when forced. She is very personable on Christmas morning, however.

We had fun opening presents. Beetle received many books. She is such a reader. This is good. She also got a Hot Wheels set (because she wanted it), a cake decorating thing, and an mp3 player. Fritz received a choo choo train and an airplane from Santa. Santa also thought a drum set was appropriate. Apparently, Mommy and Daddy were on the naughty list given the noise this thing will make. Mommy liked the hair straightener and photo printer she received. Daddy has a lot of new barbecue toys and sauces to play with. Yeah!

It was a smaller Christmas in the gift giving area this year. Even so, there is plenty of new stuff around the house. We washed up and then headed out to mass. Attendance was sparse. We are hopeful the midnight mass was well attended. Fr. Paul even mentioned how Christmas Day is being replaced these days, much to his chagrin. Fritz acted up again. His behavior in church sucks. It’s frustrating. The crying room is unheated. Fr. Paul’s microphone kept cutting out as he walked about, so it was difficult to hear the homily. Mommy and i decided that next year we will attend the midnight mass alone. Aunt Kitty can then take the children in the morning as we rest. Thanks be to God! Even so, singing Silent Night with the children in my arms was a very special moment for me.

We came back home on this dreary day. There was no formal dinner at Grammy and Poppy’s. That means we could have the old-fashioned pajama day. That quickly turned into nap time. It was a relaxing day, but not as festive as Mommy would have liked. There was lots of assembling, putting in batteries, etc. The important thing, however, is that we were together.

May your Christmas have been as wonderful!

One thought on “Away in a Manger”

SUPERB! This is got to be one of the best caches I’ve ever done! . . . MOST EXCELLENT cache, thank you so much!