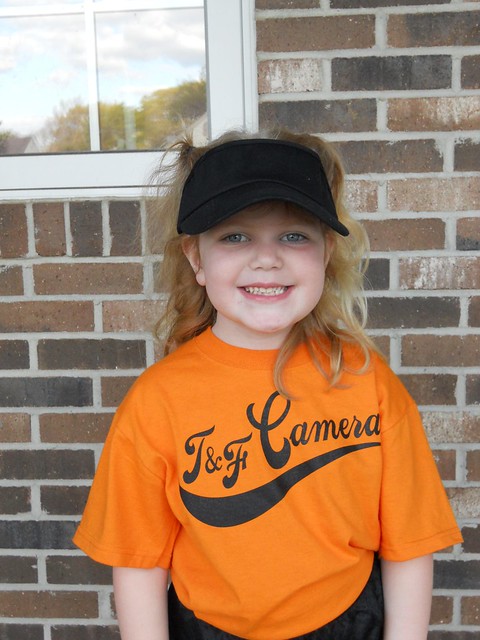 Beetle is playing softball this year. Her team, T&F Orange, is sponsored by the photographer who took photographs of our wedding. Opening Day was Saturday, but Beetle’s team did not play until today. She has about two games per week. The league is for girls 5-8, so Beetle is among the youngest playing. While Beetle isn’t the best at the game, she is improving.

Beetle was geared up for the game. She was extremely excited. Her team was up first. In this league, everyone plays. Apparently, the number of outs matters not. The team we played today (light blue) appeared to be comprised of eight-year olds. The first inning was rough. They threw out most of our players. Beetle had her turn. She was one of the only girls who hit the pitched ball. After several attempts, a tee is brought in if the girl does not hit the ball. Much like when Beetle played T-ball, she failed to run to first after she hit the ball. Many girls did similarly.

Once all of Beetle’s team batted, they took the field. There are a lot of players (10 or more). They all play in the infield. The best I could describe Beetle’s position is back-up shortstop. She fielded no balls.

While the first inning dragged on, Fritz was active. We were most impressed when he showed us he can scale a chainlink fence. Wow! He is all boy! We had worked out that Gert would watch Fritz and if things dragged, she would take him home. Things did drag. We could not see how six or seven innings could be played at the rate they were going. I learned the skinny later on: four innings or an hour, whichever comes first. We hit the hour mark in the second inning.

FWIW, Beetle’s team played much better in the second than they had in the first. The coach said something about nerves. The other team was definitely older, but perhaps they weren’t all eight.

Beetle said she had fun. We really played up the event. Beetle was excited. She sometimes mopes about with things like this. Soccer was such an episode a few years ago. So we root, root, root for Beetle. 🙂

The future’s here, we are it, we are on our own