Tonight I gave my ice breaker speech at Toastmasters. I had written (re-written, actually) a very good speech. It had a wonderful progression. It had the right amount of repetition. It was interesting. It met the goals of the assignment, which was to introduce myself to the audience.

I was nervous. Hell, that’s why I’m in Toastmasters; I become nervous when speaking publicly. I had rehearsed my speech a lot. I was able to deliver it without notes. I didn’t even have notes. I knew the speech was coming in at about 5:10. According to the timer’s report, I spoke for 4:34. That means I was speaking quickly. I know I didn’t pause the couple times I had built in.

I felt my left leg shaking early in the speech. But I did get with the flow. By the time I got to the part about Gert, I was pretty comfortable. I got the laugh at the marrying line. Initially, despite my nervousness, the men nodded as I walked through the Pirates line-up.

The timer’s report may not have been accurate for there seemed to be confusion at the timer when I looked over. I suspect no one was keeping track. I don’t know for certain.

The speech was good. The delivery was certainly not as polished as my rehearsal.

George Cisneros evaluated the speech. He sugar-coated it. Everything was good. He did pick up on the layering in the speech. Everything he said was a positive. He added twice during the evaluation (and again afterward) that he doesn’t blow smoke. Sure he does. It was all smoke he gave. Yes, an ice breaker evaluation should be more positive than not, but not to pick up on the nervousness and comment shows he didn’t get it.

Speak-EZ runs a contest each meeting. There were three speakers. Robert Cranston, a DTM, spoke after me. Frankly, his speech sucked, but he has a great manner about him that exudes confidence. Then there was Bruce Figueroa who gave his third speech. It was all about three kinds of fear and then the five stages of fear. It was muddled and uninteresting. Furthermore, it was long. He came in under time, or so they say. It seemed to go on forever.

There was a tie for best speaker. I assume it was between Bruce and me. I say that because Robert Cranston was tallying the votes. If he had been tied, I believe he would have just announced Bruce the winner. Instead, he announced the tie. He asked Richard, the Toastmaster of the evening for a tie-breaker. Bruce was declared the winner. Good for him. Richard and Bruce are friends.

The thing is, if I was deemed to be tied or worse than Bruce tonight, then I did not do my job. it’s no one’s fault but mine. If I want to win these contests, then I can’t give anyone a reason to vote for anyone but me. I could always vote for myself. 😉

Sigh . . . a good speech was not delivered well. I need to fix that.

Youth: 1st Game (Spring Training)
It was the 27th of June 1971. For my birthday, my parents took David, my best friend, and me to our first baseball game. It was a twi-night doubleheader. The Phillies versus the Pirates. We drove those 90 miles from Cape May to Philadelphia while the immortals still roamed the field; the games sported four future hall-of-famers: Jim Bunning pitched the first game for the Phillies, Mazeroski took up second for the Pirates, Stargell was on first, and my all-time favorite, Roberto Clemente, anchored right field.

Baseball is the story of my life.

Adolescence: Carlton game with Dad
Many years after that first game I found myself tucked away at boarding school in Middletown, Delaware during adolescence. It was a good place to be. My parents wanted something a little better for their son. Academically, I was challenged. It was a beautiful campus with lots to do. I met three friends who have been dear in my life.

On one non-descript April Saturday, I was in my dorm room when a friend burst in to tell me my father was waiting in the parking lot. Dad was in a wheelchair and could not climb the three flights of the old stone building to my room. I rushed down to the car. “Hop in Fritz,” he said. “We’re going to see Carlton pitch.” Carlton never threw a no-hitter, but he pitched a beauty that evening. It was into the eighth before he relinquished his only hit of the night. The Phils had notched another win. Afterwards, Dad drove me back to Delaware. Then he drove himself the two-and-one-half hours back to Cape May. I do not know what possessed my Dad to drive all that way, but I think it is what fathers do.

Young Adult: Follies @ Fenway
Later, I went to college and had my only World Series experience. More important, however, I graduated. For all my life I was told I could sow my oats on my own time. So it was off to Boston, Massachusetts. I arrived with an agenda. I was a restaurant manager.

It is not easy to schedule a day when the cook, the bartender, waitresses, and the manager are all off together. I managed to do so once and we all crowded in the 57 bus from my apartment to Kenmore Square where Fenway Park is. We imbibed in a few beverages of our choice and entered the yard in good spirits on that sweltering hot afternoon. Roger Clemens was on the hill. We cheered enthusiastically for him as he was a frequent diner at the restaurant. Pete Incaviglia took up centerfield for the Rangers. We were merciless on him as we chanted, “Stinky Inky!” We smiled as we exited Yawkey Way after another Red Sox win.

The merry bandwagon of the New England Experiment lasted a rollicking four years. By the time I left the area, the Sox were re-building for a better team and I was re-building a better career.

Settling Down: Remaining Sharp: A Thinking Man’s Game
It was back to New Jersey I came accepting that my way hadn’t worked. I enrolled in graduate school, became a teacher, and adopted [Cumberland County] as my new home.

I was an adult now, but it was to baseball I turned for my pursuits. I studied the game as I had never before. Why does one walk Barry Bonds with the bases empty and how does one implement the perfect hit-and-run? These questions and others I debate daily with my friends online. I taught my fourth graders how to score the game, a lost art indicative of troglodytic pursuits.

But the shear pleasure of the game is not lost. For my birthday once, my fiance and I watched the Phillies take on the Braves. The celebration of my day at the park was enjoyed with 25,000 others as the crowd sang Happy Birthday to me, tossed confetti all over us, and placed my name in lights on the Diamondvision. We rooted strongly for the Phils, but sadly, they were not up to the task that evening.

FAMILY: Teaching My Children to Play/Old Age: Relaxation
Patty and I were married. We had two children. Now we don’t get to the park as frequently as we used to. Instead, I am in the yard teaching my youngsters how to play the game of baseball. Both have played Tee Ball, and the boy appears poised to be a base stealer the way he runs.

Eventually, after the children are grown and I trade in the papers I grade nightly, I see another image burned in my mind.

It is of a warm summer day and a porch. A glass of lemonade sweats on the rail. The radio plays the game. And I am sitting in a rocking chair . . . scorecard in my lap . . . smile upon my face.

The game of baseball tells the story of our lives. 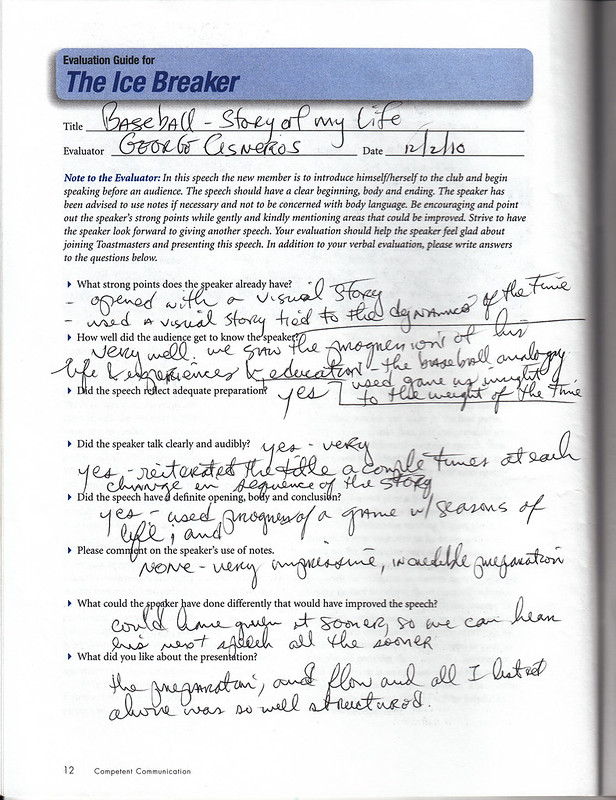 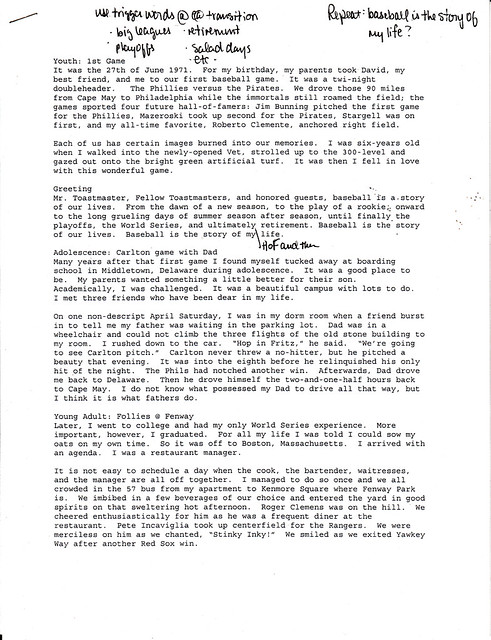 One thought on “Well, I Must Have Sucked”

Have a healthy disregard for the impossible.

— Larry Page, How Does Google Decide What to Work On?