Tonight I gave my second speech from the CC manual; it was my first speech at Camden County Toastmasters. Once again, I was nervous. It showed up in my voice. A speech that was coming in from 6:40 to 7:05 in my practice runs, was delivered in 5:20 in actuality. That is a big difference!

The speech itself was okay. It is no Earth mover, but it was pretty well structured. It was the delivery that lacked. Going in, I thought it had a decent chance of winning based on average speeches; it would all come down to delivery.

I was the third speaker this evening. The second speaker was Michael the Magician. He was pretty good. Other than handing out a paper in the middle of his speech, he delivered very well. I’ll also note he did not perform his trick well as I saw the second ball he placed in the lady’s hand. Anyhow, he was a good speaker and has a very good presence. The first speaker, Martha, was not good at all.

After I was done, I knew I hadn’t won. It wasn’t disastrous, but I was not on.

I had told myself to smile after I announced “Mr. Toastmaster.” I did. But after the greeting, I blanked out. Seriously. I paused for a big second or two. How scary. I recovered and got the speech rolling. Once going, I knew I would fine. Fine describes it well; it was fine not great. I am really concerned that I keep shaving off large chunks of time from what I prepare. I didn’t skip anything, but I wasn’t as wordy in couple spots.

The “I am proud to announce I am FAT” received a good chuckle. I left out the line about reclaiming the basement floor for the children’s play area. I wasn’t as demonstrative with my “yippee”s, but I was okay. It was actually something a couple people complimented me on.

I totally changed the delivery of being students’ father and discipline deliverer. Out came a different couple lines that I never rehearsed. It was delivered less funny and more straight. It played pretty well.

Then I got on a roll, or at least settled in pretty well. I was making eye contact, but I wasn’t as demonstrative as I had planned. At about the four to four-and-a-half minute mark, I sought the clock. I could not see the clock. That bothered me, and it got me off my game. I actually said I couldn’t see the clock, re-positioned myself, and lost my train of thought for a moment. I never saw the clock during the speech. Obviously, addressing the clock in the middle of the speech was a tactical error. I was called on it in my evaluation and a couple folks commented on their notes to me. I flubbed it.

I know depending on where I am as I transitioned to the endgame determined how I approached it. Not knowing the time, I believe I picked up the pace. That is not good. I did not punch the ending well, but it was not horrible. Even so, someone commented that I needed a stronger ending.

Rosario was my evaluator. He was very kind to me. He rated me 5 across the board. He had nothing but kind things to write in my book. In the spoken evaluation, the only thing he criticized was my noting not being able to see the clock. He was correct, of course.

When it came around to voting for best speech, I voted for the magician. He had the best speech of the evening. I voted Martha for the second best. I will always vote for the other speakers and not vote for myself. Nevertheless, I won! I am surprised by that. I think it is partially because I am new.

But I also gathered from some of the comments made to me afterward, that my nervousness was not as apparent as it was to me. That is probably true to a certain extent, but it seems unlikely it wasn’t noted at all.

It wasn’t the worst speech ever. It was better than Martha’s. It was well-written, but not well-delivered. I have plenty of room to improve. At least I stepped up. I am proud of myself. Two speeches down. I will begin crafting number three soon.

The following were the comments fellow Toastmasters wrote to me: 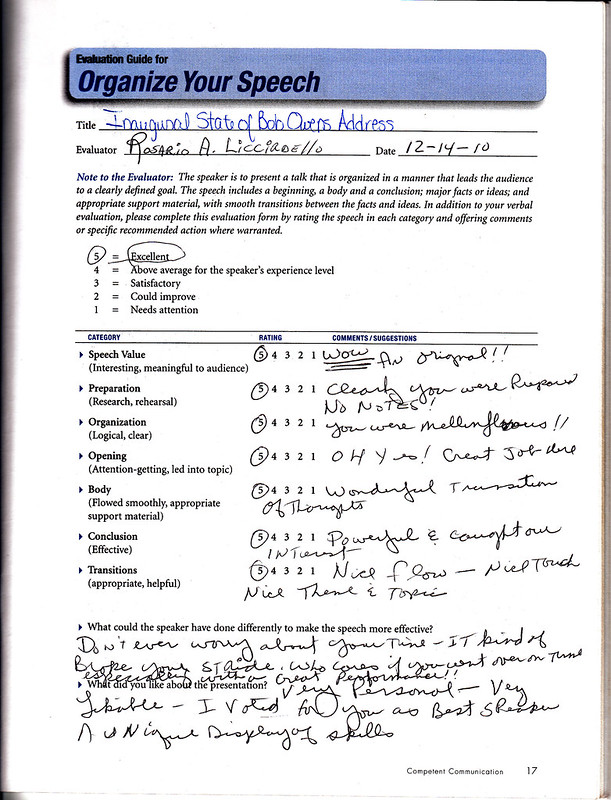 Fail with honor rather than succeed by fraud.