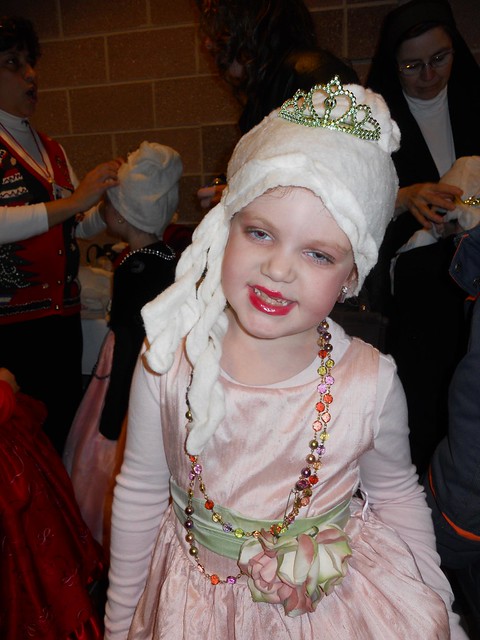 Last evening and tonight was the annual Christmas performance for St. Mary Magdalen. Once again, it was held at the county college. Seating is limited, so students are provided but three tickets per night. As I had an event last evening, I attended tonight with Grammy and Poppy; Mommy attended last night.

The show was wonderful. This year’s story, Angels Aware, told the Christmas story from the angels point of view. Michael had called a meeting of all the angels. Word was out that God was going to show how much he loved man. How would he demonstrate it and which angel would be involved?

Each grade level had a song and dance. Several of the older students acted out the parts of Everlasting Life Television Network (ELTV). They narrated the story. The show was excellent.

The first graders danced to What Love. Each of the girls was dressed as a lady. Beetle wore a long gown, lots of make-up, and a wig. She even had high heels. The boys dressed as gentlemen and had wigs of their own. Beetle suggested they looked like George Washington. 🙂

For a week now we have been hearing about Matthew. Matthew is a fourth grader Beetle is smitten with. He attends latchkey. Once in a blue moon, Beetle does too. She thinks he’s cute, although most of the time she denies it. She asked me to take video of his dance. It’s The Perfect “10”. Sigh . . .

We had a lovely time. Grammy and Poppy liked the show too. I believe (in all seriousness) that the first graders had the largest applause. Beetle is on the left in a cream dress at the beginning of the dance. She is in the middle of the class for the curtain call.

One thought on “Angels Aware”