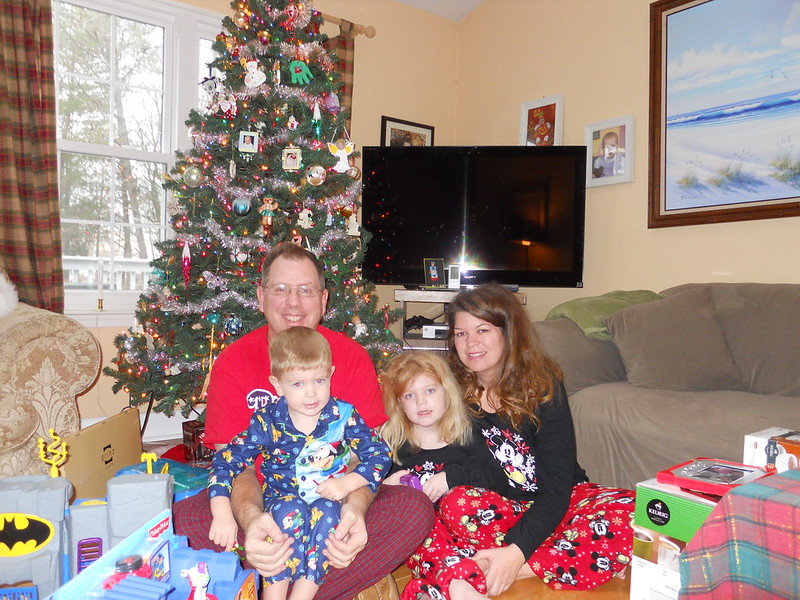 Fritz was first up. He discovered a present under the tree in his bedroom. He was really excited! He came into Mommy and Daddy’s bedroom to wake us up. We weren’t quite ready to move, so he got into bed with us. He was so excited. When I said I thought he had been on Santa’s naughty list, he turned to me and said, “I’m on the nice list, Daddy.” Indeed he was!

In the time we got out out of bed, got Beetle going, and assembled to come downstairs, he had opened his bedroom present. Fritz isn’t much on waiting. Last evening he opened the mint sets Aunt Patty had sent. He even opened Beetle’s. Apparently, he even opened Aunt Kitty’s present from us. Bad boy! But oh so cute.

The children descended and opened their stockings first. Such exuberance! This is the first Christmas that Fritz has truly been into. It’s been such a pleasure to talk to him about what is going on. And he is so polite (outside of opening presents).

This year just about every present under the tree was for the children. Mommy and Daddy only exchanged stocking gifts as we recently purchased the televisions.

Fritz loved the Bat Cave. He plays with Sean and James’ every time we visit. He has been so eager to have one of his own. Beetle received a netbook and a musical keyboard. It looks like the netbook will be returned as it is slooooooooooooooooooowwww and can’t load the pages of the web sites she likes to visit. I’m not certain what we’re going to do in this regard. I recall Aunt Patty received an organ one Christmas. Beetle’s isn’t nearly as massive in size. Technology certainly has changed.

Mommy cooked a wonderful breakfast of French Toast. Now we are all relaxing prior to dinner at Grammy and Poppy’s. The children are having great fun playing!

You buy furniture. You tell yourself, this is the last sofa I will ever need in my life. Buy the sofa, then for a couple years you’re satisfied that no matter what goes wrong, at least you’ve got your sofa issue handled. Then the right set of dishes. Then the perfect bed. The drapes. The rug. Then you’re trapped in your lovely nest, and the things you used to own, now they own you.