On Tuesday I attended the CCT Toastmasters meeting. I arrived a few minutes late. There was an accident on 295 that brought traffic to a standstill. It took me 20 minutes to merge from 42 to exit 295. Fortunately, I used the GPSr on the Incredible to navigate me to Haddonfield.

I was the ah-um counter for the evening. I found a sheet online that I used to keep track. It worked pretty well. I noticed I was quite relaxed at the lectern. When it came time for the final report, instead of saying John had three ahs, two ums, and a so, Mary had four ahs, etc., I joked that the ahs won followed distantly by the ums! It received a big laugh. I then went through the roster highlighting the one word each person used the most. I pointed out Rosario’s good use of pauses and Michael the Magician’s clean slate. It all went well and had most folks engaged. I think it was a successful approach to a difficult function.

Table topics was run by Charlene. She had an interesting take for the evening. She would call someone up under the premise that he was interviewing for a position. She would announce the job (police officer, chef, accountant, etc.) and that person had to sell himself. After that was done, another person would be brought up to interview for the same position. This time, however, he was to make himself out to be a poor candidate. That made for great fun. Bruce, a new TM, won. I didn’t think he spoke well, but hey, that’s how this stuff works. I spoke as the “good” chef. I spoke pretty well, I thought. Mike the Magician, was probably the best of the table topics of the evening.

Tonight I attended the Speak-EZ meeting. I spoke, giving my third speech. It was titled Online Credibility. This speech, much like speech #2, was never written. Going in, I knew it wasn’t great. I’ve been reading the LinkedIn TM discussion board. Several times I have come across posts that say we needn’t spend too much time crafting a speech. I am playing around with that a little. I think it helped relax me.

Even so, it was okay. I hadn’t practiced it to the point I had it down. I lost my place twice. Once was when the audience got involved (at the mention of lying). I played along and that got lost coming back to the speech momentarily. No biggy. Later, however, I lost myself transitioning to the last point (timeliness). I made a mistake and announced I lost my spot. Sigh . . . Of course, Cindy picked up on this and used it as a point that needs improvement. While I know it wasn’t a great speech, I wish I could have been evaluated without the mishap. I think it was a solid speech otherwise. I also think it could have won the contest. George also gave his third speech. It was okay. I thought it was too full of information and I lost some of the points. Ginna spoke well, as usual. Her speech was storytelling. Her speech was supposed to be Rosa Parks’ speech in 1996. It seemed to me she read the speech more than she gave it. I thought that might be enough to give a nod to me, but it wasn’t meant to be.

Unbelievably, Richard K. who was the general evaluator, made comments about my speech. He didn’t identify me by name, but he commented he heard someone say automodeal. I did get tied on that word, but corrected. No one else used it. Then he commented that someone said chain of thought, instead of train of thought. As I was the one who commented on losing my train of thought, that was me again. Of course, I did not say that. Remarkably, he wasn’t done. He then went on a spree talking about hand gestures. He was pointing me out with this. As far as I know, the GE isn’t supposed to comment on the speeches like this. I’ll tell you, it certainly didn’t make me feel good. I’m a big boy and I can handle the attack. I am here to learn. I wasn’t flawless. That is what I took away from the comments.

I will say this is the second event that has made me question Richard’s credibility. Things aren’t in his favor.

I did leave out a few lines from my speech. I didn’t mention that I had researched Toastmaster blogs and they were last updated in November 2009 or June 2010.

I was pretty confident throughout this speech. When I lost my way and made the unfortunate comment about losing my place, I did feel some nervousness kick in. I fought that off and finished pretty well. I used the line:

Think of your online credibility like your virginity: once it’s gone, you won’t get it back.

That went over well.

Overall I was pleased with the speech. I knew it wasn’t great, but it was okay. The delivery was decent without the “train of thought” moment . . . and the other stuff that bothered Richard. One thing that I have noted for each of my first three speeches is that everyone has indicated it is well-organized. I think that is accurate.

I’m learning, and that is what is important. The tit-for-tat stuff is nonsensical. I am trying to become a better speaker. I am. 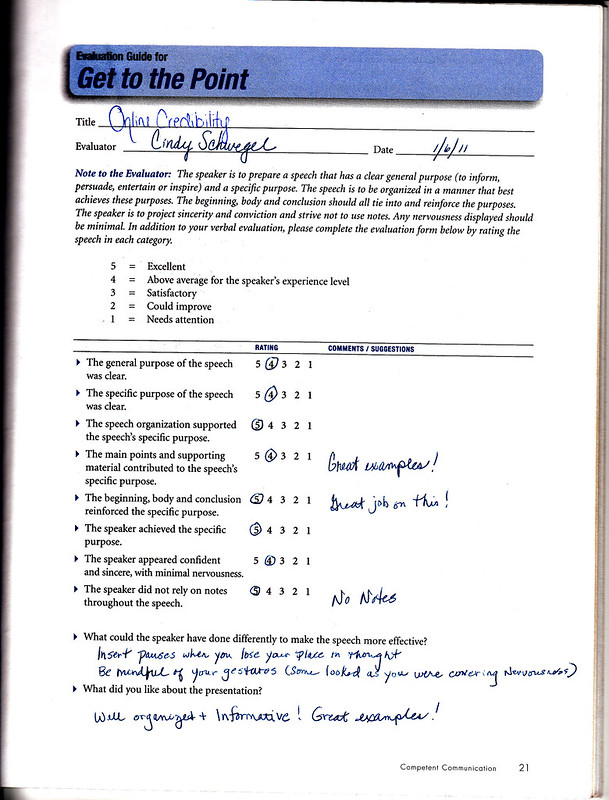 The winding path to peace is always a worthy one, regardless of how many turns it takes.