Tonight I delivered the second speech in the Storytelling manual. My speech title Heartbreaker recounted my first concert experience.

I struggled with this speech. I think it is more the summer blahs than anything. I “wrote” it essentially this afternoon. I needed a personal story to tell. That should be right up my alley, but I was drawing a blank. I began going through the archives here and found the linked post. I thought that would work. I crafted a close to eight-minute speech and took off for MAT.

As I sat in the fire station preparing for the meeting, I reviewed the evaluation of the speech. I had a slight panic attack. As I read the requirements of the speech, I began thinking I had missed the point of the speech. I think I was to take a personal story and then create a fictionalized version of it. So, take the point that Dad didn’t believe me and craft a story from that. Obviously, it was too late to do anything about that.

I knew I had a decent little story, so I wasn’t too concerned. Most folks don’t seem to pay attention to the manual objectives as it is. I told my story. I could see the audience was listening. We had a huge audience tonight. I figure there were 30+ people in attendance.Heartbreaker by RDOwens

Generally, I was pleased with my delivery. Once again, I did not pause as I should have. Kevin Godfrey evaluated me. His one suggestion was that I add more details to the concert description. Scott Noar commented later that he thought that was not a good suggestion. Scot seemed to generally enjoy the speech. Others similarly commented.

Without sounding too conceited, it was the best delivered speech of the evening at that meeting. I won Best Speaker, although there were no ribbons. 🙁 That was just the last indication that this meeting was so poorly run. The officers walked in late from their monthly officers meeting. The room wasn’t set up properly. The Toastmaster failed to introduce the functionaries. The meeting began without several roles being filled. We had seven guests (maybe more) who saw a less than efficient meeting. And Rosario, even though I really liked him, spoke for way too long in his presidents remarks. Oh, and the table topics session once again dragged on. I like this club, but it’s meetings are not as professional. 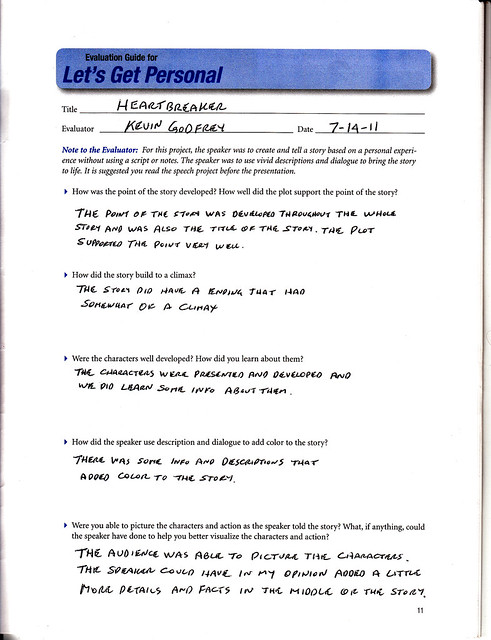 that is the best cache location! Thanks for showing us!

— C.C.Cachers, log for T-5 >Taming the Trail to Thompson’s