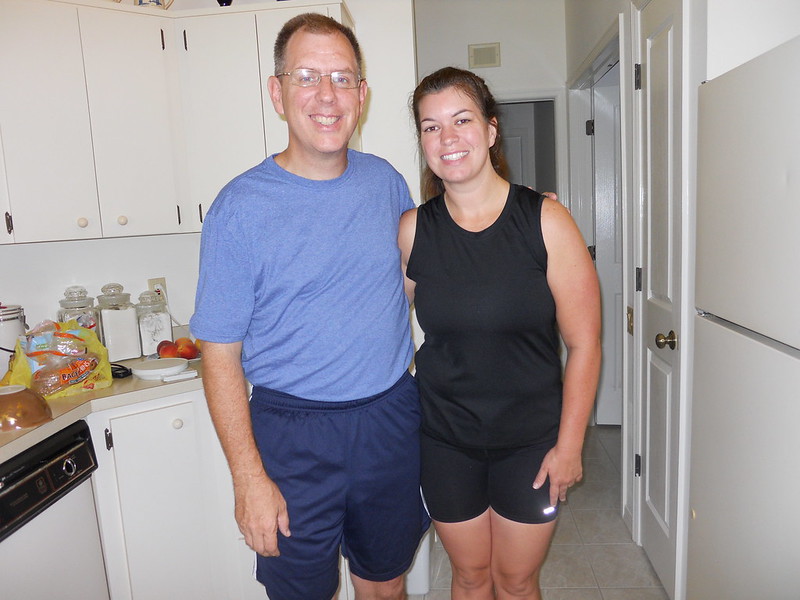 We are not normal. We are quite aware of that. As our Florida vacation neared, I looked around to see what might be available for the adults on the trip. The focus of this vacation was the children, but I thought it might be fun to find something for Gert and me to do together. How about a 5K? Gert was game.

Of course, all sounded fine from our air conditioned home in New Jersey. Once we arrived in Florida, we quickly realized the heat and humidity was going to be a factor. Not to mention, we had successfully kicked into vacation mode. Yes, we have been off for a month+ already, but we have been busy and have been doing school work too. Arriving in Florida released us from the rat race. But we were registered. We were going to have to go through with this.

We drove over to Clearwater Beach. We were early, but checked in. This was going to be even more rigorous than we thought; the entire race was on the beach. And it didn’t take long for us to realize that this was a “real” race; several hundred runners, most who appeared to be runners. Splendid!

It was a great event. A band was playing classic rock songs on the pier. The beach was packed. There was a children’s race before ours. Then we lined up near the Gulf and before we knew it, we were off. Gert and I agreed to go our own paces, so we split up. I knew I was I was not at my previous pace from the get-go. With the beach being public, there was plenty of dodging beach goers, sand castles, and other obstacles as the 400+ of us ran down the beach. Quickly the leaders escaped my view.

This was an out and back run. I was surprised not to see the front runners for some time. I kept thinking I should have seen them long before I did. It wasn’t too long after I did that I hit the turnaround myself. I held strong for another half mile, but once I hit about two miles, I was done. Huffing and puffing, I convinced myself to walk. And once I walked, I was done. Oh, I picked up the running. Then I walked. Ran, walked. It was pathetic. The pier never seemed to come closer.

I picked a victim to run down . . . a young guy with a tattoo on his back. He was part of a crew that seemed like a local cross country team. His buddies were well ahead. He, I could reign in. Except a couple of his buddies came back out on the beach to run him in. I couldn’t keep pace. My competitive running days are active in my mind, but they are absent from my legs. I had no kick at the end.

Despite some disappointment, I finished 144th. They distributed 311 cards, but there were many more than that who ran. We estimated more than 400. I came back for Gert and we played in the Gulf for a little bit. By the time I got to the pavilion, some time had passed before I put in my card. I think there was only one other card in my age bracket. Hmmmm . . . could it be that I placed in my age division? Yeah, that was not a rational thought; I was 14th out of 18. 🙁 Obviously, I have some improving to do. I was still in the nine-something per mile pace, but I was about 90 seconds slower than the race I ran last month. Lots of factors can explain that, but in the end, they’re all excuses. I need to do better.

Anyhow, we completed the race. And we ran a race while on vacation. So two thumbs up for us!

The way I figure it, this one should count for ten caches. Thanks for the challenge.