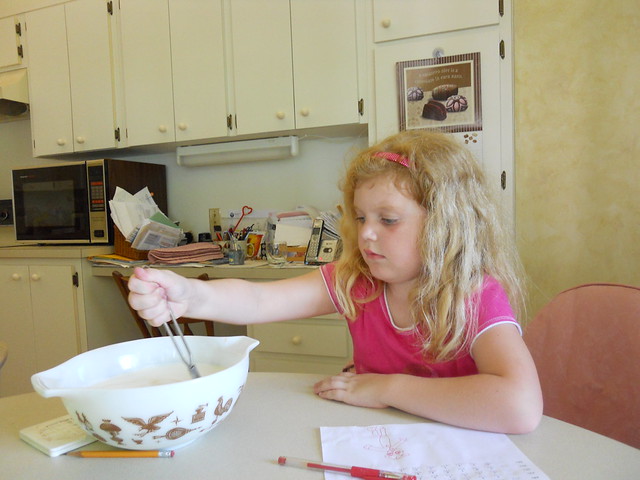 Grammy found a really neat book that teaches children how to play Bridge. Yes, my entire life has been surrounded with this game and Grammy is ensuring it will be for the rest of it too. 🙂 It really is neat. There is a progression to learning the game. Today we began teaching Beetle and Gert. It was a lot of fun! Beetle is taking to trick taking well. We played lots!

No trip to Grammy’s would be complete without making ice cream. Beetle selected Kit Kat ice cream from the Ben and Jerry’s recipe book. She and her mother both love Kit Kats. Grammy had a swell idea of making chocolate ice cream bowls for the ice cream. The idea was to melt chocolate, dip an inflated balloon in the chocolate, and let it cool. After it does, pop the balloon and one has the bowl. The ice cream turned out very good; the bowls didn’t work quite as planned. Oh well . . .

Grammy was a real trooper today. She babysat the children so Mommy and I could have a date. There are so few nights out together. We had a lovely time in Clearwater Beach at sunset. Oh no, we didn’t have a romantic dinner. Rather, we ran a 5K on the beach! Yeah for us. The hot weather continued and this was exhausting. We think the course was longer than 5K as some others said. It was interesting as this was a public beach and there were sunbathers, sand castles, and other objects we needed to negotiate. Yet, it was fun. And we completed it!

We don’t sit around on vacation!

If one’s life is simple, contentment has to come. Simplicity is extremely important for happiness.