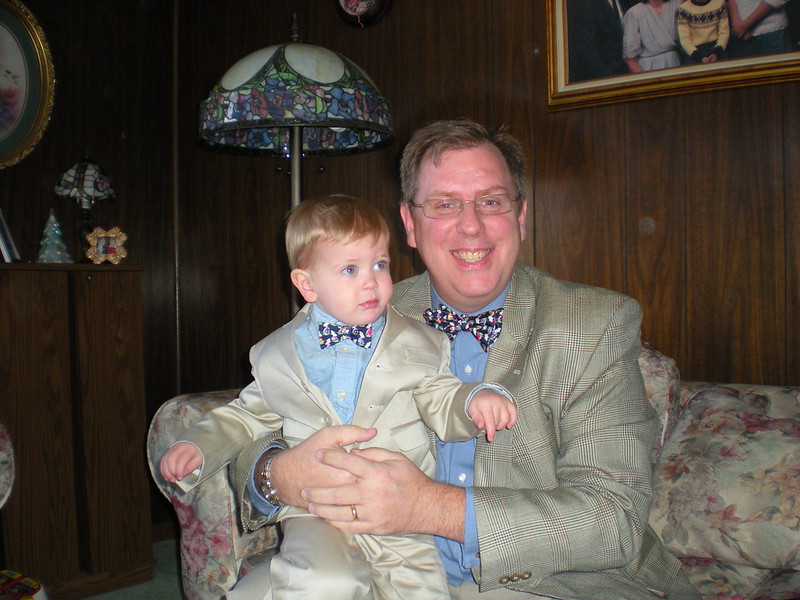 I began wearing bow ties around age 20. I am not exactly certain why I wanted to, but I suspect it came from seeing others wear them and thinking it was elegantly odd. Yeah, that’s me to some extent.

My wardrobe, according to my wife, is boring. I used to wear only black slacks, white dress shirts, a tie, and a blazer to work. Same outfit every day. I would have fit in at IBM just fine. This past year I changed things up by rotating out the black slacks for tan ones! 🙂 Over the years I have added blue dress shirts to the mix. I even have one yellow Oxford too. I am such a heretic.

When dressing casually, a pair of jeans and a shirt works fine. I tend to favor blues.

So, as you can see, I don’t take many risks in fashion. I think that is where the bow tie fits in. It was my way to get a little flair, but still remain traditional in my attire.

I purchased that first bow tie and went straight to my father, who had taught me how to tie a necktie a few years earlier for school. He shrugged, “I don’t know how to tie one, Fritz.” Looking back, I guess that is not surprising; Dad had never worn a bow tie. So there I was with a new tie and no way to wear it. 🙁

It was suggested I go next door and ask Mr. Manifold. Our neighbor was a little older than my parents and I think they thought he may have the skill. I felt a bit sheepish at 20 asking a neighbor for this kind of help. He was a bit surprised and explained he hadn’t worn one in some time. Nevertheless, he was a trooper and there we were staring at a mirror practicing. He had to tie it standing behind as though he were tying it himself.

With enough information in tow, I began practicing and practicing until I could do this on my own. At the time I managed a quaint restaurant. It was the mid-1980s. It all seemed to work for me.

Bow ties are a conversation piece; folks always want to comment when I wear one. Back then I wore more pastel colors than I would today.

When I began teaching, bow ties seemed like a natural fit. Given the area in which I teach, seeing a male teacher then was as unusual as a tie, let alone a bow tie. Over the years my collection has grown. I now have ties for most holidays, and enough I could probably wear them daily if I wanted to. I still wear my neckties though as the students have purchased many of those over the years.

Last year when I resumed Toastmasters, it seemed like I wore a bow tie to each meeting. It wasn’t planned, but it turned out that way. I am very structured. Anyhow, I now make an effort to wear one when I attend a meeting. It seems to fit. Yeah, I am the bow tie guy. 🙂 Hey, there’s worse things I could be called.