Project 3: The Moral of the Story
Storytelling

After stalling with my public speaking in late summer, I am back on the circuit, or so it seems. I set a goal of completing my Advanced Communicator Bronze program by 17 October. I had three more speeches to complete to accomplish that. Tonight I delivered an original story that had a moral.

Hank and The Princess was structured to highlight the lesson of “If you expect to rate as a gentleman, you will not expectorate on the floor.” Back in my adolescence, my mother sent me a cartoon (The New Yorker, I think) that had that as a caption. That always stood out. This past August marked the decade anniversary of when I last dipped tobacco. No more cuspidors for me.

So Hank was a country boy who loved baseball. I had him play for the Pirates. When he and his teammates were in the Big Apple, Hank saw the most beautiful woman he ever saw. When he approached her, the princess’s aide butted in to inform Hank he couldn’t just approach the princess, he needed to leave a calling card.

The next time the Pirates were in town, Hank had a calling card. When he was to meet the princess, once again the aide stepped in. This time she told him he wasn’t dressed properly. He needed a suit, a tie, to comb his hair, etc.

Hank took this to heart (I worked in the word of the day here: assiduous). When the Pirates returned the following season, Hank had his calling card, a new suit, a silk tie, a haircut, etc. He waited for the princess, who was running late. He began to pace. Then he pulled out his tin of tobacco, to help him cool his nerves. There were no cuspidors in the hotel, so Hank spat in the corner each time he walked the length of the lobby. The princess finally arrives, sees this and then leaves. I had the aide deliver the moral.

I worried that the word expectorate might not be understood. I think it was 50/50 on that front. The manner in which I delivered the moral was a bit abrupt. If one ever reads Aesop’s Fables, the moral is separate from the story. That is somewhat how I did this. If I were to deliver this speech again, I would re-work the delivery of the moral. I still think expectorate is not widely understood. It’s risky, but I liked it. So did the group as I was bestowed with the best speaker honors for the evening.

Now to get cracking on the next two speeches to complete this . . .

Yeah, I forgot to record this one. Darn! 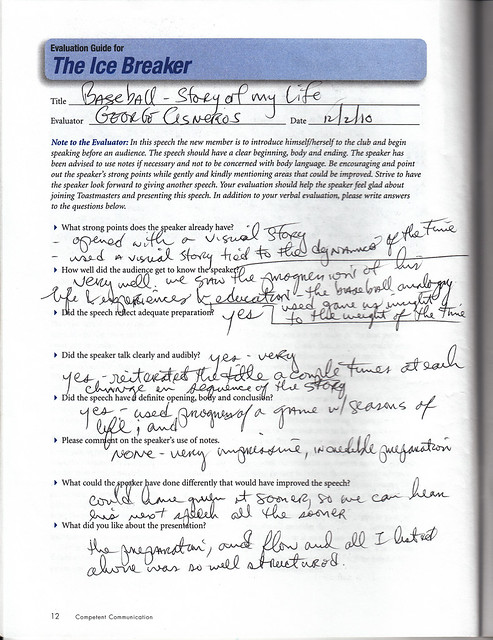 I neither know nor think that I know.