Tonight, I killed my mother. I am so sorry for this.

It will certainly come as a surprise to her, but ’tis true.

I delivered the fourth speech in the Storytelling manual at Toastmasters. The speech was to elicit emotion from the audience. It was to be a “touching speech”. To that end, I crafted a realistic fiction story. I ensured my evaluator, who introduced me (as is the custom in this club), stated that this was indeed a fictional story. In my research over the past year, I have read that some Toastmasters have taken exception when a speaker purposely yanks at the heartstrings without disclosing the speech is fictional.

This speech is one I like. The recording does not reflect the tone in the room. About a third of the way through, I knew I had hooked the audience. As I practiced the speech, I knew I needed to drive home the close. I found that when I became choked up, I felt better about the end. I was able to get there live. I killed my mother for dramatic effect. Several Toastmasters mentioned that my quavering voice was effective.

Unfortunately, I really hooked a few in the audience. While that meant I met my speech objective, it was apparent the Toastmaster of the evening fell totally for it. I cut off the recording early in the after speech discussion, but you can tell she (and she was not alone) truly believed my mother died last week.

I felt pretty good about my delivery. I once again spoke more quickly than I practiced. It was decent, but not as good as rehearsal. Also, I do not like this recording. Perhaps the distance between the mic and me accounts for it, but the expression didn’t come through in the audio. Several members mentioned they thought I should deliver this for the International Speech contest next spring. Perhaps. The speech needs work, but rather than beat myself up over it, I’ll just let it stand for itself. 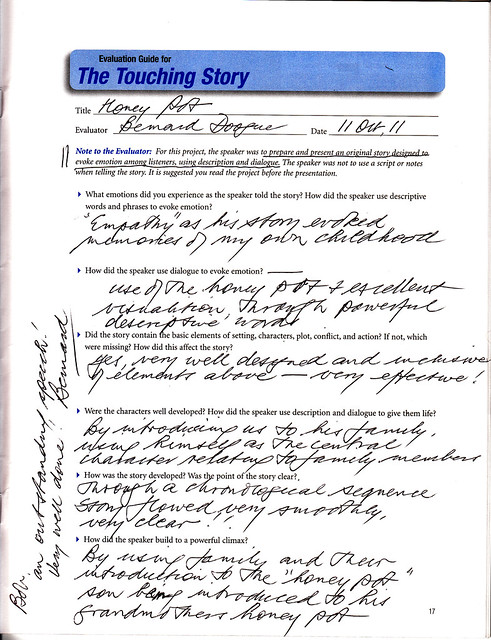 One thought on “I Killed My Mother”

The first step to correcting a mistake is patience.