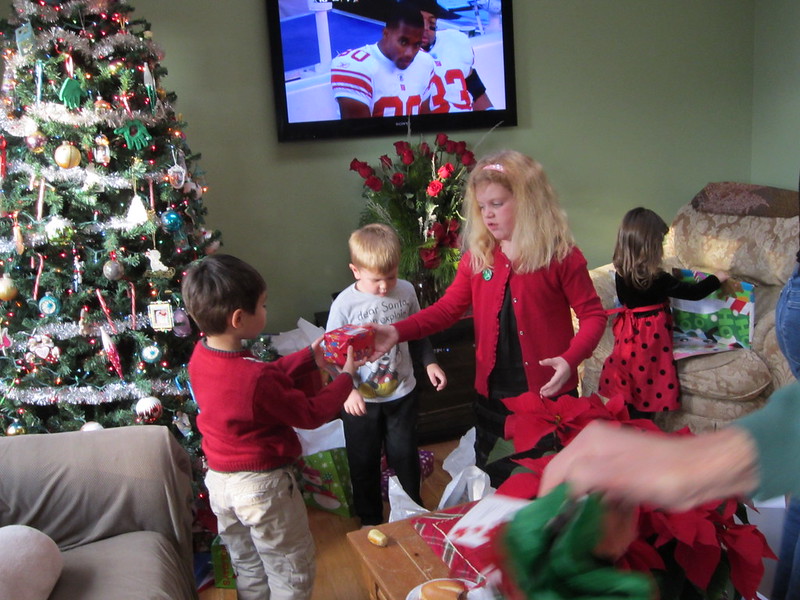 Today was our annual Christmas Eve party. We hosted it a little earlier in the day to accommodate some other schedules. Poppy had mass at 4:00 and Uncle Jesse had to work at 3:00. It was a grand time. Unfortunately, Aunt Tracy had to work and Aunt Jill wasn’t able to make it.

Nevertheless, the children had a blast! As always, there was too much food, but lots of fun, games, and presents. The children are growing. Katie is a talker! Ellen, Sean, and James had fun with everyone. Aunt Kim and Uncle Mike brought Ovie and his girlfriend, Ava. The two bulldogs were hot among the partygoers.

We moved the location of the traditional family photograph since the couch has moved. This year we had the shoot in the front living room. Here’s the video of how a family portrait comes to be. 🙂

The gift exchange was a full-blown free-for-all. Plans are already hatched to organize that a bit more next year. Two rooms with children in both is too much. We are going to have stations next year where the children rotate through the different family members. No one knew who gave who what this year.

But that’s what family functions are. Bellies were full, smiles impressed, and memories etched.

Do not act as if you were going to live ten thousand years. Death hangs over you. While you live, while it is in your power, be good.