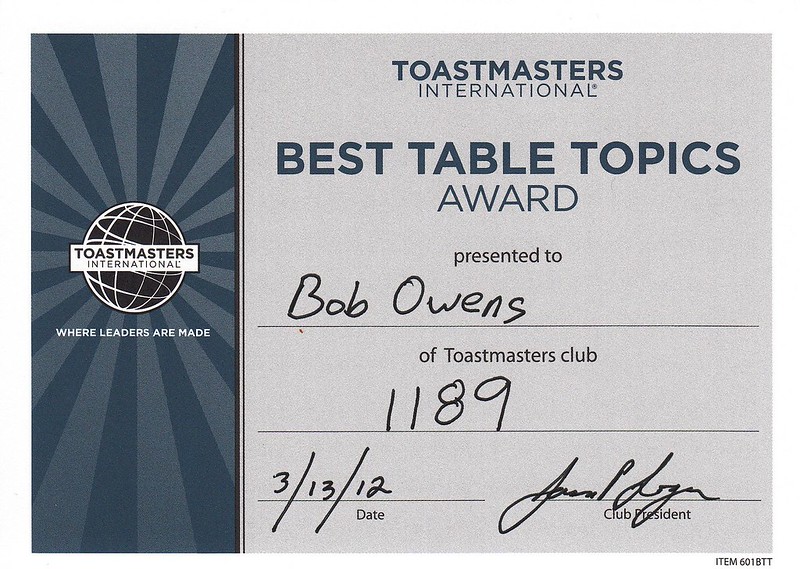 Today was such a blah day. Nothing in particular was horrible, it is just I am in a funk. As I explained to Gert, I think it is the winter blues I didn’t get to have because it’s been so damn mild this year. Perhaps not.

Anyhow, as I drove my butt to yet another Toastmasters meeting (how many have I attended in the last two weeks?), I began questioning just what I am doing in this organization. Presently, I am a member of three clubs and mentoring a fourth. Stretched thin, no doubt, but perhaps I just don’t need this much public speaking and leadership in my life. I began thinking about how I may drop membership in one or two clubs.

Tonight I was the General Evaluator for the meeting. This role leads the evaluation portion of the meeting. I presented what evaluations are expected to achieve, introduced the evaluators, the timer, Ah/Um Counter, and Grammarian. I then evaluated the meeting. I like the role, but it is pretty easy. We had four of our six speakers bail tonight (grrrr), so there was even less for me to do.

This club does its extemporaneous speaking (Table Topics) in the middle of the meeting. The master of this session presented real-life situations she has faced as an adjunct professor at a local community college. She seemed to be having difficulty recruiting people to participate this evening. I finally volunteered. I don’t do enough Table Topics.

I was presented with the situation that I presented a pop quiz that many students failed because they hadn’t been studying and doing their work as they should. One student was so put off, he melted down, and I had to call security to have him removed. My question is do I allow the student back the following class.

It was an easy situation for me. I explained that since this was a public institution and money was paid for the course, I would have no issue with the student completing the course. I then made it clear that actions have consequences and that the failing grade will remain on the gradebook and no make-up test will be provided. I likened the situation to a quiz my fourth graders are currently in. I then related the old story of Brett and me with Mr. Washburn (“life is not fair”). I then did what most table topics speakers seem to forget; I re-stated my position and ended with a strong statement. “In closing, I would permit the student to come in, shut up, and sit down so we can get on with the learning.”

The club felt this was the best table topics of the evening. Woo hoo!

You know you’re in love when you can’t fall asleep because reality is finally better than your dreams.