I have been researching story slams. I am absolutely taken with these. The Moth is the granddady of them all. I am determined to make it onstage there.

I spent the weekend watching videos of these slams. There is a certain style to these speeches that fascinates me. I looked up a future slam and saw the theme was Detours. I put together some ideas based on that. My original speech was very much in the slam style . . . it was somewhat frantic. As I worked on it and tonight’s meeting approached, that speech took on more of a Toastmaster feel to it. Because of that, I was less than pleased with my delivery. The audience seemed to like it; I received many compliments and no negative feedback. Even my evaluation, given by a 45-year Toastmasters veteran, was extremely complimentary. As a matter of fact, despite me poised for a heavy evaluation (I have seen him rip into others), he did not even provide the obligatory critique.

For me, I was disappointed. I spoke too fast, once again. Furthermore, even though I was trying to set myself up as a snob in the first part of the speech, it failed with the toned down formality that came out because it was Toastmasters. There were two new members in this club who didn’t seem to care for the boasting. The boasting was needed to set up the back half of the speech, which is where the lesson came in. I probably needed to go way over the top to pull it off. I do that just fine at home, but seldom pull it off during the actual speech.

After delivering this, it is doubtful I would deliver this again. This is a speech that I really liked as I crafted it, but loathed it as soon as it was delivered. Sometimes, that’s how it goes. 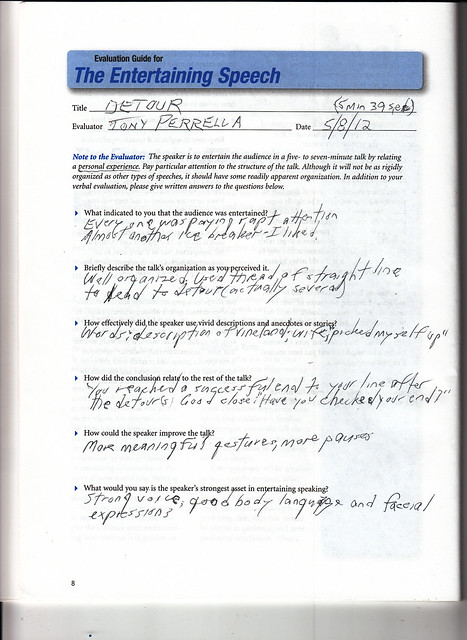