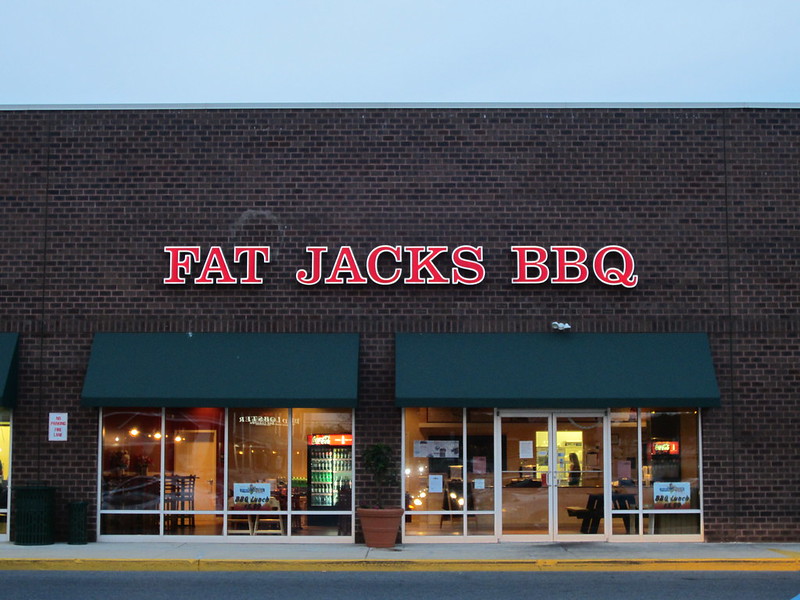 Overall, Fat Jack’s is a solid experience. As for barbecue, this is about as good as it is going to get for commercial South Jersey barbecue. Fat Jack’s is award-winning food. Now, when you are serving it in a restaurant, things are sacrificed. Because of that, this food is never going to be as good as what I smoke at home. But I don’t have to do the work . . . and that is where I was this evening. I wanted barbecue but couldn’t bring myself around to smoking the brisket as I was too tired. Enter Fat Jack’s.

When I first moved to town nearly 20 years ago, Fat Jack’s was the ONLY place I would dine at regularly. Unfortunately, that full restaurant is no longer around. Fat Jack’s has bounced around, but finally opened this lunch style joint where Quizno’s had been at the Cumberland Mall. This was my first venture in there.

The girl who took my order was friendly and helpful. Five minutes later I had my take-out order. For less than $17 I walked with a half rack of hot spare ribs (trimmed St. Louis style), half chicken, seasoned French fries, sweet potatoes, and a Diet Coke. I thought that was a fair price for the food.

The ribs, which is really what I wanted, were what one expects in a commercial barbecue joint. The fell off the bone and were covered in a sweet sauce. They were tasty. The ribs were meaty and I received a full six bones that were full-sized. I prefer a tug to my ribs and I usually eat my ribs dry, but I knew what I was getting. These were good and regular folks will enjoy them. The chicken was good too. Again, plenty of sauce, which I don’t use on chicken. It helped as the chicken was slightly overcooked. Not horribly so, but I imagine sitting around waiting for my order didn’t help it.

I was surprised the sweet potatoes were with sugar added. I know folks do that, but it certainly wasn’t needed. I selected those thinking that would be my “healthy” side. I also got the seasoned fries. The fries, while simple, were pleasing to my palate.

It is the meal I wanted without me having to fix it. I thought it was priced fairly. The food was prepared for the masses, not for the barbecue addicts. That is quite understandable.

This is where you want your barbecue from if you are going to purchase it in the area. Good stuff.

The truth about yourself is always the hardest to accept.