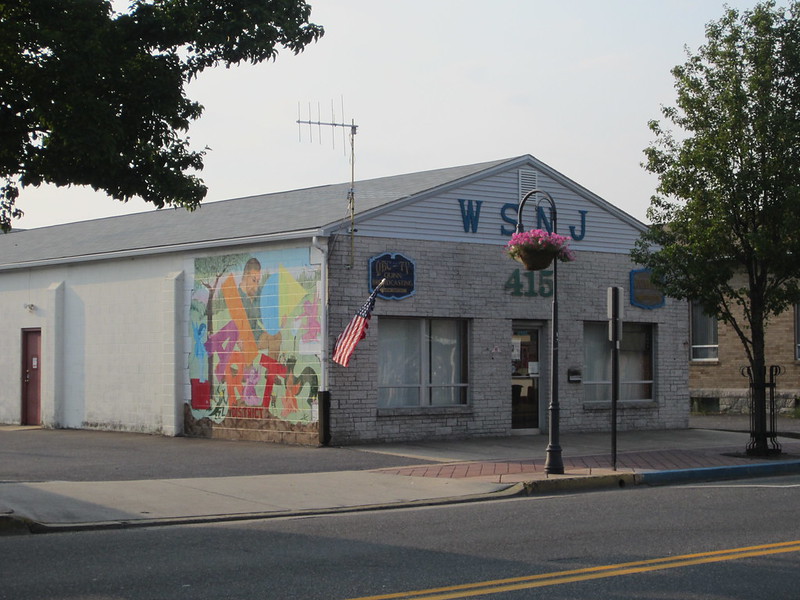 Commissioner Jim Quinn owns WSNJ on High Street. Do you watch channel 2? Listen to 1240 AM? Yes, those local stations are owned by longtime politician Quinn.

Quinn was mayor for years until the last election where he didn’t garner quite enough votes to hold that seat; now he sits beside the mayor. Quinn has twice been fined for being in violation of the law. Once for voting on issues that further his business interests and the second time for failing to follow federal regulations for his broadcasting license.

Cannon’s 10-by-15 foot ode to the Glasstown Arts District titled “Arts District Under Construction” is on the north-facing side of the Quinn Broadcasting building.

“These murals are the latest examples of amazing transformations that the city has seen,” said Mayor Tim Shannon. “Spread the word about Millville to the world.”

The murals were made possible by a $3,500 grant from the Weed and Seed program, as well as other grant money.

The Weed & Seed program is designed to improve cities.

Operation Weed and Seed is a multi-agency strategy that “weeds out” violent crime, gang activity, drug use, and drug trafficking in targeted high crime neighborhoods and “seeds” the target area by restoring these neighborhoods through social and economic revitalization.

Presumably, the mural on the side of Quinn’s business falls under the “seed” component of the program.

How did Quinn’s business get selected for this mural? It’s not like there aren’t other walls downtown that would have benefited from a taxpayer-funded mural. Would Quinn’s position on the City Commission have anything to do with why his private business was painted with your tax dollars?

One of the first writings I published in Cumberland County was this excoriation of Robert Torricelli when I wrote for The Daily Journal. The then-senator was embroiled in an ethics investigation. In it I wrote:

It does, however, say plenty that our senator cannot keep the appearance of impropriety from splashing the front pages.

I referenced that four years later when I called for disgraced Republican New Jersey Assemblyman Nick Asselta to step down when he procured drugs without seeing a doctor:

As a public servant, it is expected that Senator Asselta conduct himself in a manner which instills trust.

Perhaps this is all on the up-and-up. The problem is that it looks shady. High Street is replete with businesses needing help. Why was Quinn’s business singled out?

What kind of trust has Commissioner Quinn instilled in his constituents?

Fail with honor rather than succeed by fraud.