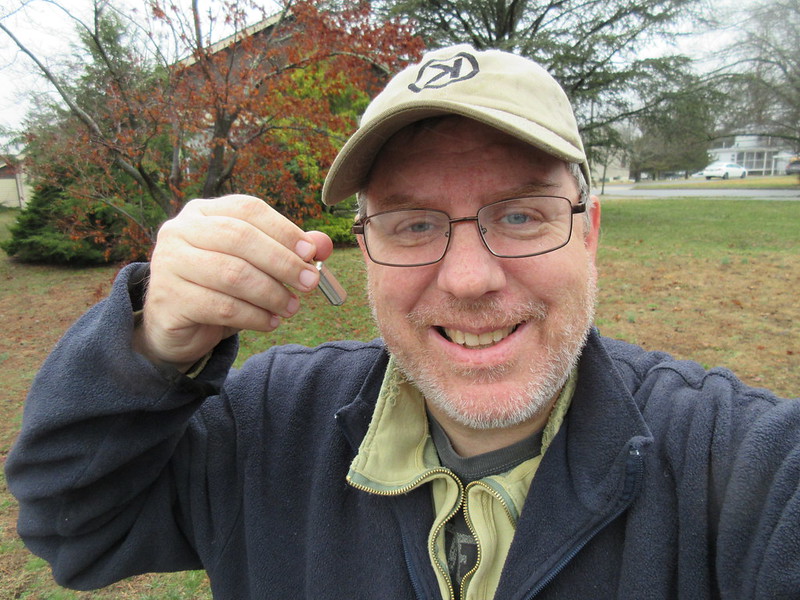 Yeah, that’s not the geocache. Nope, just one of six decoys.

One would think that I would prepare myself better by now. No such luck.

So, I had an errand to run out this way at noon. Figured, I’d come out early and find some geocaches on this rainy, dreary Sunday. Took a look at the map last evening and began a list of geocaches. Realized I didn’t really have a route. Went back to the list and kind of grouped the geocaches into “neighborhoods”. Had found some on my way into town. This was the closest waypoint to the last geocache I found. Just plugged in and took the short drive over. Parked and was certain that this would be in front of me. No, the needle is pointing across the street. ‘Twas thinking I should have re-positioned the vehicle.

Walked over reading a little bit as I did. Saw the hint. Well now, I just happen to have that!

Immediately spotted this. Retrieved. Was all proud of myself for the preparation. Opened the geocache. Oh!

This hunt was much like peeling an onion. Each time something new unfolded itself.

There was a total of 23 minutes between the first photograph I took and the last. Can’t say for certain I would have found this on my own. In the end, jct,jr took pity on me and came over with some guidance. Yeah, it’s there. And pretty much what I was looking for. But no, I didn’t find it until he showed up, and I was beginning to wane in my abilities as I circled and circled coming up empty.

We chatted a bit. Saw some very interesting photographs. It’s nice to meet folks on the trail, as it were.

Thank you very much for the head scratcher; I truly appreciate it. Cheers!