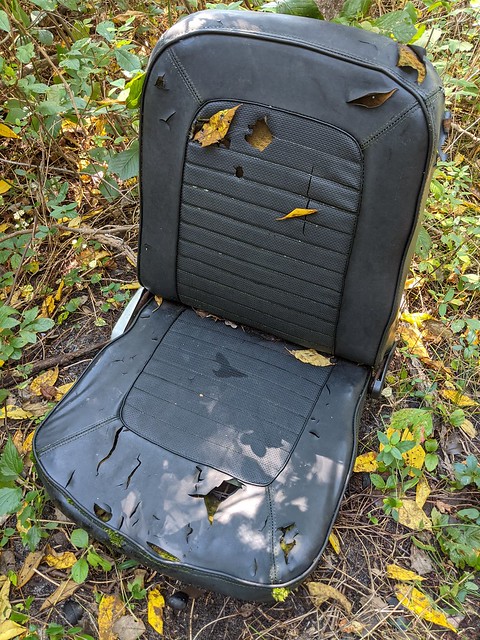 My month of mysteries is behind me. I have been looking for a lightened load in that regard. But I still need to find a geocache most days to fill in my calendar. I was out running some errands. I decided to do an easy cache only and go home and relax the rest of the day.

When I pulled into the cemetery, I decided to seek this one. I figured it was only .3 miles away and I had the time to seek it today. I could leave the park-and-grab for a rainy/snowy day.

I found the trail and took it back to the stream. The coordinates put me on a tree. I reached into my pocket. Without paying attention, I dropped my pen. It took a minute to find it in the tall grass. Well, that wasn’t where the cache was hidden.

Coordinates drifted on me. The phone and the GPSr were not in sync with one another. After a couple minutes, I righted things and found the geocache. I also found a caterpillar, which may have been larger than the cache.

Unfortunately, I was unable to open the geocache. It’s a bison tube, but much like Jordyn Elle, I wasn’t able to budge the lid. I did not have my bag with me, so I didn’t have my pliers with me. This is the second geocache from this CO that I have not been able to open, although the other was a combination lock.

Frustrated, I returned to the vehicle and the easy geocache that was waiting for me there.

One thought on “Take A Seat”

I’m like the grass stains on the dress whites