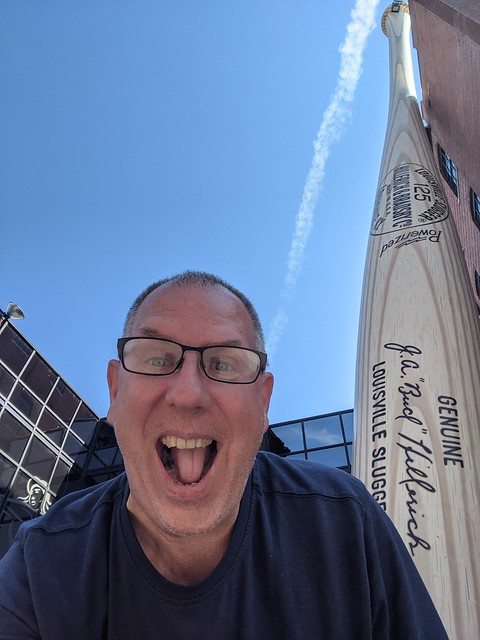 Last summer I ended up in Louisville. We went to the Louisville Slugger Museum & Factory, but I passed on the tour. I wasn’t up for it and I didn’t want to force others to do this as I knew it would only be for me. We also struck out on the webcam in Louisville because the building was boarded up due to the Breyonna Taylor incident.

Because of that, I had reason to return. That was today. I made the long drive from West Virginia to Louisville. It was even longer because I went the wrong way and lost 30 minutes. The windy roads through the West Virginia mountains was something. My vehicle’s engine worked hard. I can’t understand the 55 mph speed limit. There was no way to go that speed. I was lucky to hit 35 at any point.

Anyhow, after logging the webcam, I hustled over to the Louisville Slugger Museum & Factory. I purchased a tour ticket and went in. The tour was informative and my kind of event. Non-baseball fans may not enjoy it as much. 😉 I got to hold Dick Allen’s bat. He swung a big bat! Saw some early bats. The handle was totally different. They swatted at the ball more than they swung.

Thoroughly enjoyed the tour. I am not a big museum guy, but a baseball bat museum is right up my alley. Fun times!

— John Denver, Sunshine On My Shoulders