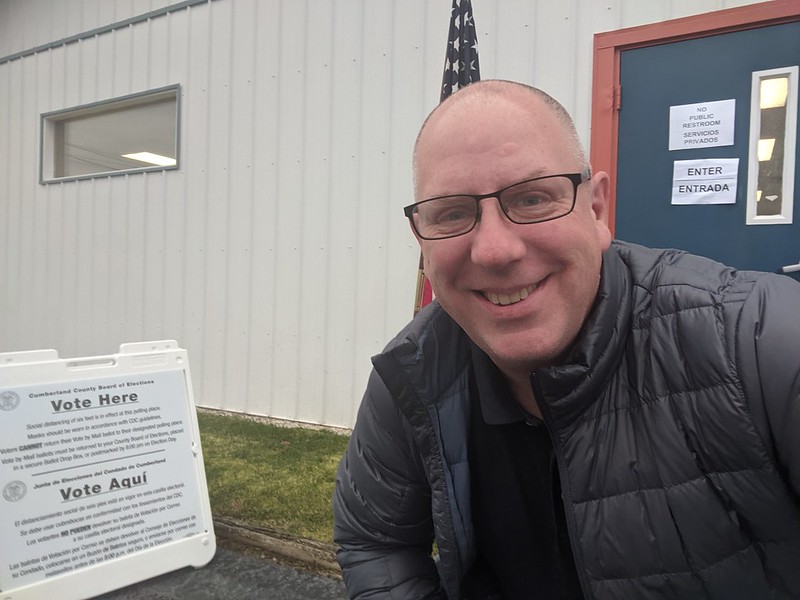 New Jersey, along with Virginia, has the first test of a new president with its gubernatorial election the year following the presidential election. Here in Democrat country, Phil Murphy’s re-election is almost guaranteed.

I began my day by voting. We have a new process this year. This will need an overhaul.

There are two polling areas in the same place. It was unclear which one I was to go to. We figured it out and thus began the lengthy process. I was the only voter at the time. First I had to sign in. Gone are the books with a copy of my signature to sign next to. I signed on a tablet. That went okay save the guy working it didn’t know how to call me up.

Once signed, a credit card-type thing was registered with my credentials. I then had to sign the old style ballot paper.

I took the credit card to the booth. The booths are no longer enclosed. I sat down at a computer screen, inserted my card, and then voted. The screen is big and easy to sign what needs to be seen.

All the while a pollster walked behind me. He wasn’t peeking at my ballot (I don’t think). I think he was ensuring I had no issues. Even so, all my votes were on screen.

Eventually I was done. At that point the voter prints his ballot. It is a lengthy process to print. Out came a huge piece of paper. It seemed larger that a 17″ piece. The pollster took the ballot and placed inside a cardboard cover. At that point he could have seen my vote.

Then I had to walk my ballot that was inside the cardboard to a lady at another device that looked like a printer but was a scanner. She had great trouble feeding my ballot into this device. Two other people came over. Eventually, my ballot was removed from the cardboard to hand feed into the scanner. All my votes were clearly visible at that point.

Again, I don’t think anyone was trying to see my votes, but at several places the votes were visible.

This process seems exceedingly cumbersome. And an extreme waste of paper. And lengthy. I can’t imagine how backed up polling places will be when there is a crowd. This was close to a 10-minute process and I was the only one voting.

The machines were created by Dominon as their name is prominently displayed.

More work needs to be made to make this a better process. I never had a problem with the old system, but I suppose this will eventually be better. Maybe.

I hear some people
been talkin’ me down,
Bring up my name,
pass it ’round.
They don’t mention
happy times
They do their thing,
I’ll do mine.