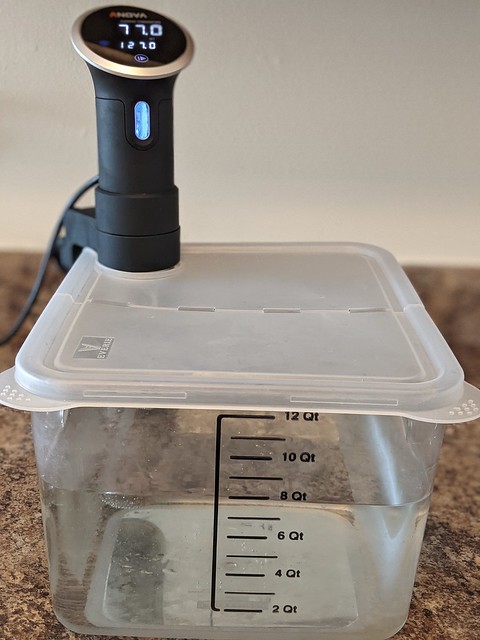 This is a post in the My Things series on this blog. In it I chronicle items I own. I seek to describe why I own the item, whence it came, and what value it provides . . . and any other tidbits of interest.

In 2014, I purchased my mother a Dorkfood sous vide device. This was essentially a water heating element that drops into a pot. I thought it was a novel idea that Mom would like. I don’t think she used it much. But I did think it was a neat idea. About four or five years later, my sister gave us an Anova wifi sous vide.

I did the research and began using this. I liked it!

I use this device almost every day. I eat a steak each night. When I was at the house, I would sous vide the steak and sear the steak over a chimney of charcoal. Here at the apartment, I have perfected searing a steak in a cast iron pan.

This is total control of cooking meat. It is foolproof. It is set-it-and-forget-it. Perfect!

My initial research brought me to the Rubbermaid container and lid. While not needed, the fitted lid does keep efficiency in the system. It also keeps anything from falling into it. The clear container permits me to see in. That was far more exciting in the beginning, but I do think it looks nice.

Is the container needed? Not at all. A stainless pot would work just fine. I remember back then people were using ping pong balls as lids. Yikes!

That I could control this anywhere via the Internet is remarkable. I don’t often use that feature, but I have.

Nice and simple food preparation. I enjoy a great piece of meat nightly.

Understanding is honoring the truth beneath the surface.