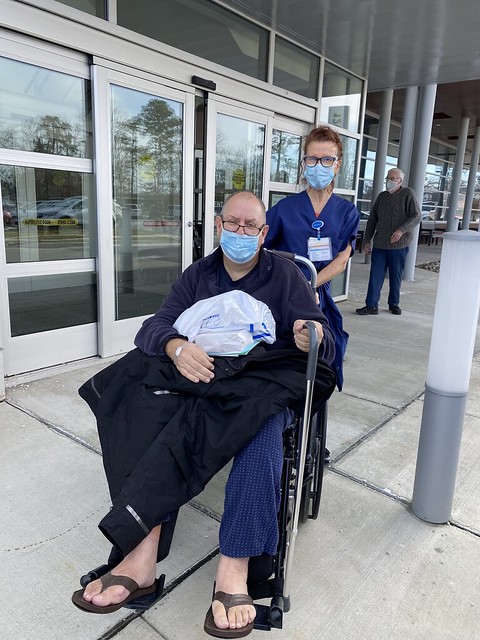 Today I had my right knee replaced.

Woke up at 4:45 a.m. and left the apartment at 5:33. Arrived and checked in at 6:15. When they called me back to the room we learned that no one could join me. That was a surprise.

AtlantiCare kept me busy. After just a couple minutes, a nurse came in and got the ball rolling. Vitals were taken and I changed into my hospital garb including underwear.

Then my leg was shaved, the doctor came in and briefed me, meds were administered, lots of review of what was going on, what I need to do afterward, the anesthesiologist came in, etc. Lots of action. I had brought a magazine to read as I recall sitting around for my bunion surgery; I never had a chance to open it.

Eventually, the first round of drugs were administered via an IV. I had been told I would be able to see the robotic arm before surgery. That didn’t happen. After the drugs were in me, I was out.

The next thing I remember is waking up back where I began. I remember repeating over and over that I was in pain. Lots of pain. I was asked to rate the pain on a scale of 10. I said 9. In came the anesthesiologist. I received two more shots. I believe one was another pain block, which I think will extend my no pain time now at home.

After a bit, I began to feel better. I was offered cookies. I had fig newtons. I enjoyed that and water. Then Gatorade appeared.

More nurses, a quick check from the doctors, etc. continued. Lots of review of medications and other things came. I know I was not terribly focused. They asked if they should brief my sister of the medications and care. Indeed!

Then the physical therapist came in. She had me walk with a walker. I practiced walking stairs. I was amazed at how well it went.

I am fully aware that pain is in my immediate future. That will suck. But I see that I can get around the apartment. I am a bit wobbly and use either the walker or the cane. But I am walking.

I feel like I will come out of this well. There’s work to be done. It will not be immediate, but I am hopeful.