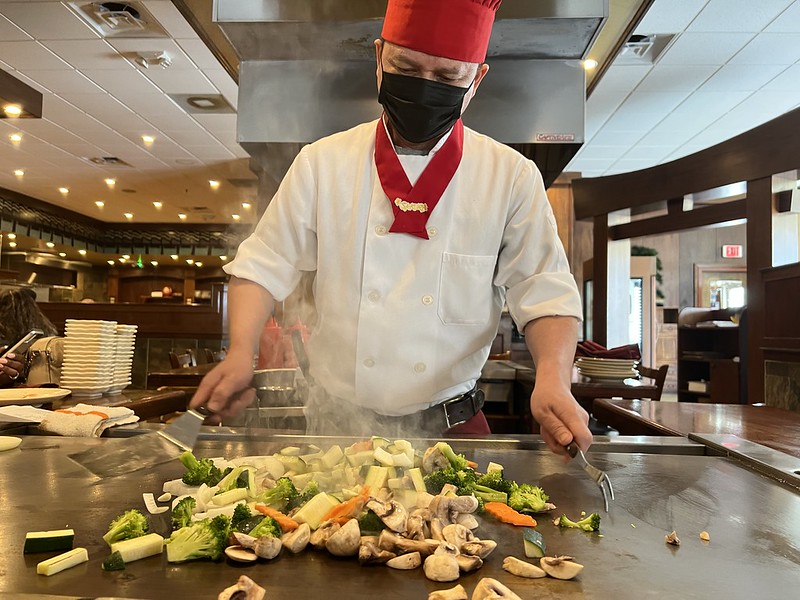 Around 2000 my parents took Gert and me to a Japanese steakhouse in Clearwater. We had a good time. I very much enjoyed the experience. I returned to one today for the first time since. It;s not that I hadn’t wanted to go in the intervening years, but I could not my ex-wife to join me.

I almost went a few months ago coming back a geocaching outing. I opted for a Sugar Hill sub instead.

Recently, my daughter has gone here a couple times with her boyfriend and his family. She raved about it! My daughter is far more adventurous with food than anyone else in my immediate family currently.

Here on spring break she has been bored. Not wanting to wait a few more days until she visited, she asked if I would take her to Sakura, a Japanese steakhouse in Mays Landing. She has learned how to convince me. She highlighted how I would enjoy it ans we could have a leisurely father-day meal out together. It worked; we went.

I was surprised that there were as many people at the restaurant for 3:30 on a Tuesday as there were. We were seated a habachi table. There were already two young women there. The restaurant waits 20 minutes from when the first people sit before the cooking commences. No one else joined us, so we moved to the front rather than a seat that would have actually been behind the cook had we remained.

Our cook was friendly and entertaining. Beetle ordered chicken and shrimp; I filet and scallops. The other women ordered shrimp and scallops.

Beetle kept talking about the yum yum sauce and the rice. Well, she ordered yum yum sauce for her salad too (she learns from the boyfriend’s family). I had the house dressing that resembled sesame sauce, in my opinion. We each had two shrimp for an appetizer. Quite tasty!

The vegetables were cooked. The scallops and shrimp served and then the meats. Finally the rice landed on the plate. I was a bit surprised as to how the plates were built. It was one item at a time. I thought the cook could have worked on getting everything lined up to serve together.

Nevertheless, it all eventually got there. Yes, indeed tasty. Yum yum sauce I bet has sugar in it. It is very rich. I understand why Beetle enjoyed it. I cleared my plate. The steak was perfectly prepared. The scallops were equally tasty.

As I explained to Beetle, I will dine here again, but it will be sparsely. It’s not inexpensive. I didn’t think the prices for what we got were out of hand, but it adds up.

He was glad, almost, that Norton and Billy were there to beat him into silence.