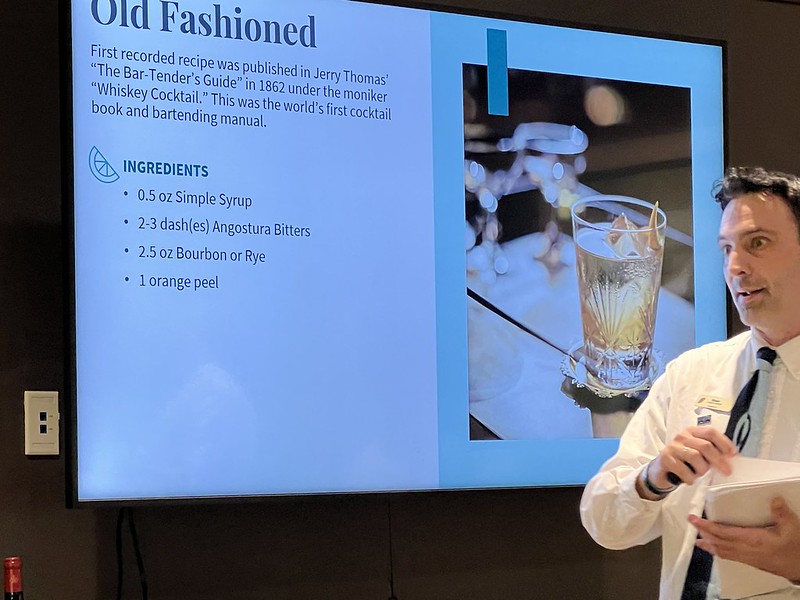 With the bar open and running, I have been researching lots about cocktails. In my travels, I stumbled upon Total Wine’s classes. I was intrigued and for a mere $20, I thought going to a class named Classic Cocktails Deconstructed would be right up my alley. This was held at the Claymont, Delaware store, which is about equidistant from me than the Cherry Hill store. I think it is actually closer although required a bridge toll.

I had been here once before. I am not exactly certain I had entered. The details are fuzzy. I arrived a bit early so went browsing. I quickly noticed there were no spirits. Huh? All I saw was wine. That is when I realized that there was essentially a second store that was all spirits.

From what little I gathered tonight, the store expanded. One said it was the second largest store in the franchise, another said it was the leargest. Whichever, it puts the Cherry Hill store firmly in second-class territory. The store is da bomb!

The first thing on my list was Laird’s BIB, which Cherry Hill was out of. Claymont had it. Of course. They seem to have everything and then some.

There was a tasting of Belvidere vodka. I opted for the blackberry and lemongrass. It was nice. I certainly see how folks would enjoy that, but it’s really not the kind of alcohol I normally drink.

It was about time for the class, so I moseyed over to the classroom in the center of the store. I was actually the first one to arrive, but within a minute a flood of people came in. I think there were 20 of us altogether.

There was a Total Wine pitch, which I suppose is to be expected. Then we got into cokctails. It wasn’t quite as classroom-oriented as I would have liked, but it was fun and interesting nonetheless. Certainly, it was worth my time and money.

We began with Aprerix Spritz as an aperitif. This was after a good discussion of Campari, Aperol, and Cynar (distilled from artichokes). Last evening was my first run-in with Campari. It is indeed bitter. The aperix used may have been slightly toned down, but not much. Campari will be an acquired tasted.

Next, we moved onto the Old Fashioned. It was made with Walcott bourbon. It was very sweet. No discussion was made as to the history of the drink nor the more recent movement from th muddled fruit approach. Simple syrup was used as oppposed to a sugar cube. While this was fine, I believe I prefer a different recipe than was used for this. Sean, our teacher, increased the simple syrup to 3/4-oz. and also increased the Angostura bitters to 5-6 dashes.

The third cocktail of the evening was the Sidecar. I have seen this a lot in my research but have not had one previously. Yes, I am a fan Sean made this with A De Fussigny Selection Cognac. I am a fan. So much so I purchased a bottle. I see Sidecars being a cocktail I entertain for a while. Yes, sweet, but rich and full as well. One of the drawbacks to this class is that drinks were served in plastic without garnishes. Apparently, Delaware requires a produce license to serve garnishes. Silly. The plastic kept the classic sugar rim from being used, which I believe will complete this drink. I am looking forward to making these.

Sean mixed his own recipe for this that is different from the slide.

We then went to the Manhattan. There is nothing more classic than the Manhattan other than the Martini, I suppose. This Manhattan did not do it for me. It was made with some rye I had never heard of. Sean kept touting that the Manhattan will make or break based on the rye. While I understand his point, what stood out for me was the sweet vermouth. I use Carpana Antica, a fullbodied, rich vermouth. Whatever Total Wine used seemed quite thin and mellow, therefore the Manhattan was not nearly as bold as I like them. This leads me to believe that much like barbecue, I am am going to be reticient to order cocktails out as I will be disappointed. Most places already mke Manhattans with bourbon. I need to find real cocktail bars or a foolproof cocktail. 😉

We then finished the class (kind of) with the Negroni. Plenty of alcohol had flowed and the students were loose as was the teacher. We were sidetracked by a discussion of proper beer drinking etiquete. I did get my margarita glass question answered in there. Sean made it clear that he was not a fan of the Negroni, but didn’t really spend much time on this drink at all.

Then the “surprise” as we were offered a digestif: lemoncello. Sean spoke highly of Lazzaroni’s lemoncello. I agree it was quite refreshing . . . better than others I have had. Good enough to pick up at some point. He spoke favorably of Lazzaroni for their approach to other alcohol (armaretto, for instance) as well.

Then it was time for shopping. This Total Wine was open until 11:00. I wanted the aforementioned Laird’s and I decided to pick up the highlighted cognac as well as tequilia and Cointreau since Cinco de Mayo is coming up next week.

I had a fun evening. It wasn’t quite as technical as I would have liked and didn’t address how to build and what glassware to use, but it was infoormative and fun. They spoke up about their classes and highlighted the whiskey classes next month. I signed up for that. It’s a night out learning new things about something I am interested in. Why not?