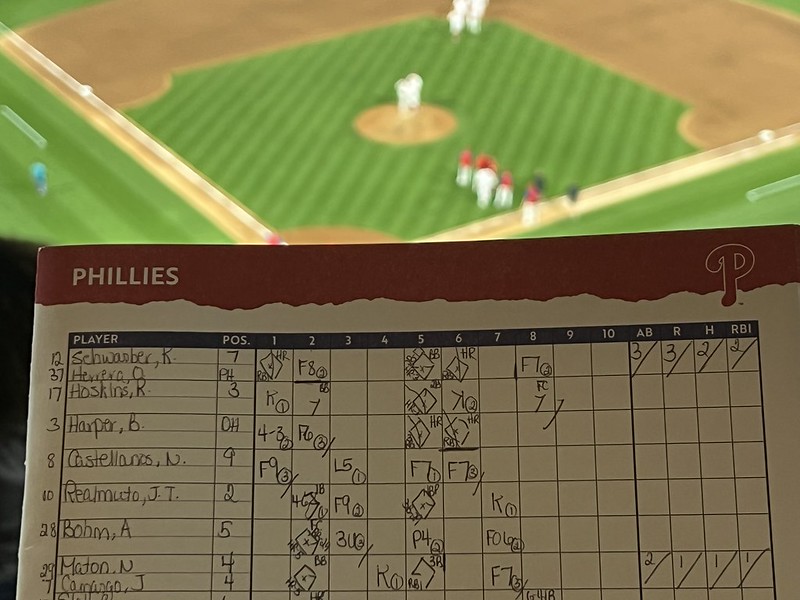 On Friday, the children and I attended a Phillies game. As I prepared for the outing, I considered scoring the game. I like scoring baseball games. But scoring games requires stuff. I am loathe to carry stuff.

Beetle gave me a scorebook. She had mentioned we could all score the game on the books (she and Joey have them too). I pulled out the book. Very small type . . . in blue ink. I can barely see what I am to fill in. It’s a new scorebook for me, so I am not familiar with it.

I like using my own scorecards. In the old days, I had a folder taped to my clipboard for extra inning cards. When I attempted to re-create that when I moved to the apartment, it didn’t work. 🙁 I used a plastic insert to it instead. While that worked, it was larger than the clipboard. I didn’t like that. I dismantled it. Now that I was going to a game, I wouldn’t be prepared.

I decided not to score the game.

As we headed in Beetle mentioned we should get a scorecard. Really? I bought two. That’s $6. I scored the game. As expected, Beetle abandoned scoring the game.

Things would have been better if I had brought my clipboard.

Why did I go the route I did?

If I didn’t define myself for myself, I would be crunched into other people’s fantasies for me and eaten alive.