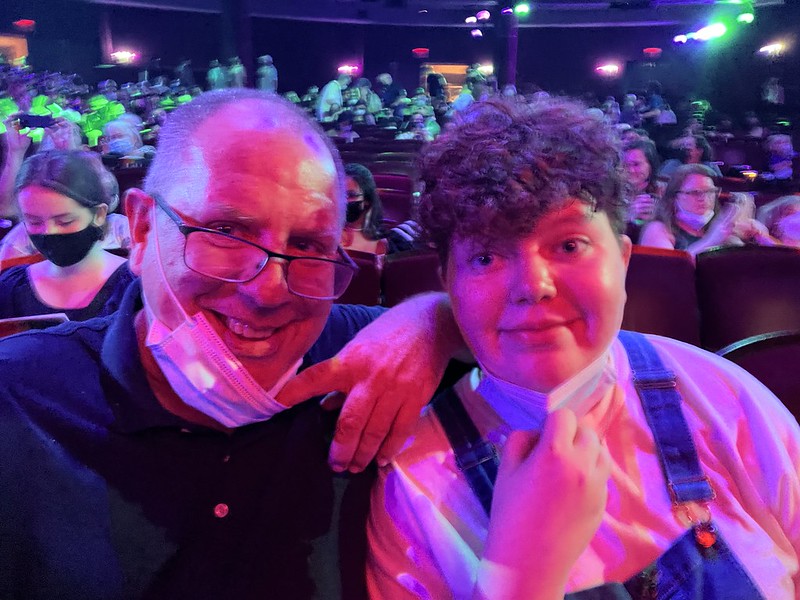 A few months back, I sent Beetle a list of theatre shows and asked her which appealed to her. Much to my chagrin, she selected Beetlejuice. I was gearing up for Wicked and was hopeful.

Little did Beetle know at the time, but I planned her 18th birthday gift to be the show on Broadway.

A few years ago, the (then) family went to New York. The boys went to comic book stores, the Village, the LEGO store, etc. while the girls went to see Mean Girls. It is the first time I took the train into the city. I liked it. I had always driven. Driving adds a layers of stress to a trip to NYC.

Less than a year later, Kitty took Beetle back to NYC to see Hamilton. Given he issues the year before, I tagged along to ensure things went okay. I then went and geocached while they saw the show. Again, we took the train in. My confidence in getting into the city via train built.

We’re back to normal, as far as I am concerned. Traveling to the city was fine. We left Penn Station and sought a taxi. That proved problematic. I hadn’t noted the loooooooonnnnnnggggg line waiting for a cab and the lack of cabs stopping. When we turned to get to the back of the line, I knocked over a coffee that was placed on a concrete barrier. That soaked me. Welcome to the city! We decided to hoof it to the theatre.

I had picked out two restaurants near the theatre for us to dine at. Beetle suggested Ellen’s Stardust Diner. I was agreeable, but the walking cut into our time. Beetle was ready for a place on the way to 46th Street. She has dined at Dafni twice before. It’s a Greek place. Since we were celebrating her birthday, it was fine with me. It was a nice place. I ordered the bronzini. It was tasty, but they did not debone it leaving it for me to do. Grrr . . . this should be deboned for the customer. We enjoyed out meal and then headed to the theatre.

I hadn’t told Beetle what we were doing today. I confirmed that we would see a play. As we approached, she guessed it was Beetlejuice.

We sat second row dead center at the Marquis Theatre. This is a modern theatre. It would have been most enjoyable seat if I had not had a man who took up two seats seated next to me. It was most annoying.

I had never seen the movie. It was an ’80s movie. I was 23 when it came out. It did not appeal to me . . . ever. But I watched it last evening. The movie did nothing for me. It is dated and the story is meh.

The theatre performance did not improve on the story. Still meh. They changed the focus of the story to Lydia and her desire to bring her mother back to life. That didn’t help.

That aside, everything else about this play was outstanding! The sets were just the most remarkable I ever seen. Eye-appealing, modern, able to evoke many different moods, etc. are just some of the adjectives to describe them. The scene where Lydia and her father go to hell had a set that was simple but made it seem like CGI was used. It wasn’t. Stunning repeating square patterns!

At the end of act 1 when Beetlejuice takes over the house, the house became black and white. Most wonderful!

There were animatronics that were expertly designed. Even the costumes of the skeletons were awesome! There were trap doors and a launch pad out of the orchestra pit. Lots of high-tech hijinx for a play.

Accompanying this most excellent set were the actors. While I didn’t like the politics that Alex Brightman interjected in the opening, he was a perfect Beetlejuice. I dare say, he was even better than Michael Keaton from the movie. Elizabeth Teeter was perfect as Lydia. Sure, I love Winona Ryder, but she has aged out of the role. Kerry Butler, who Beetle reports to now having seen in three different shows, was wonderful as Barbara. I thought this 51-year old was in her 20s. 🙂

As Beetle and I discussed on the way home, there were no lowlights about the production. Nor should there be. It’s a nice reminder from the local theatre I normally see. This was a professional show and it was great!

We dined again at Stewart’s in Vineland on our way home. Just a wonderful day with my daughter. Loved it!

I’ve got an answer
I’m going to fly away
What have I got to lose?