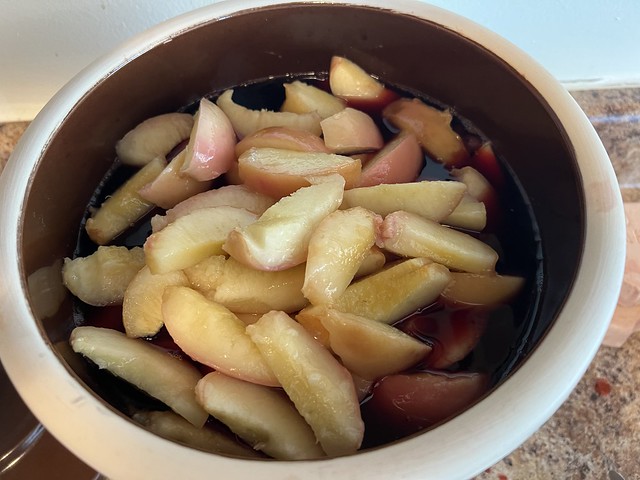 This project has taught me some things. I began the rumtopf with strawberries. I think of strawberry season the very beginning of June. Strawberries were ending that week. Likewise, I think of peaches as August, yet I have been seeing peaches everywhere. The other day I stopped at Ingraldi’s as I needed some items. They had peaches. I asked if they were Jersey peaches. Indeed! Then I heard how everything came in early this year. They’ve had peaches all month.

Picked up three quarts ($5 per). That was 15 peaches. I opted for white for no reason.

Here’s the thing. I like peaches, but much like with oranges, I don’t eat them. They are too much work. It’s been since childhood that I cut open a fresh peach on my own. Today was interesting.

I knew peeling peaches wasn’t done with a vegetable peeler as the flesh gets cuts up. I looked at some videos. It seemed easy enough. First I scored an X in the bottom of the peaches’ skin. Then I boiled some water, tossed in six peaches at a time for 30 seconds. Took them out to an ice bath, and repeated.

Peeling the peaches at this point could not have been easier. The skins came right off.

Then I set to slicing the peaches. Ugh.

These things are slippery than eels without skins on them. And pitting them was a chore on a few of the peaches. Oh, everything was ripe, it’s just that I was trying to preserve the flesh and well things got messy.

All of a sudden I was concerned that the peaches would turn brown, so I opened the rumtopf and just placed the slices right into the pot. Filled it all the way.

I had planned on stopping with peaches. It’s a good thing for there is no more room in the two-gallon pot. Now it’s time for the alcohol to do it’s thing.

Unless someone like you cares a whole awful lot,
Nothing is going to get better. It’s not.