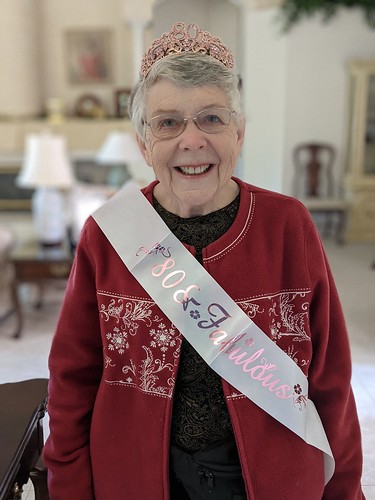 When I was about to set off for college, she sat me down and explained that the next four years would be the last time I would have to do as I want. She encouraged me to bask in the college experience, to sample as much as I could.

Mom had some stellar parenting skills that were lost on me as a child.

Once there was some pie leftover for dessert. Both my sister and I wanted some. Knowing that it was likely not to be cut evenly, she provided the instructions that my sister was to cut the wedge of pie, but that I got to select which piece I wanted. That made it so Patty would cut as evenly as she possibly could.

When my sister announced she was going to be married before she graduated college, my mother stated that married folks pay their own tuition. My sister got the message.

When I was about 18, Mom asked me if I remembered liking _______ (I don’t recall what the example was) when I was 13. It was something I no longer thought was kewl. She then said that if I were to get a tattoo, when I was 40 it was likely I wouldn’t think what I got at 18 would still be to my liking. I wasn’t thinking of getting a tattoo, but she noted some of the town boys had and wanted to head that off.

She had just the thing to say to get me to stop wearing a crazy feather earring.

She inspired me to read.

My mother is a good drinking buddy too!