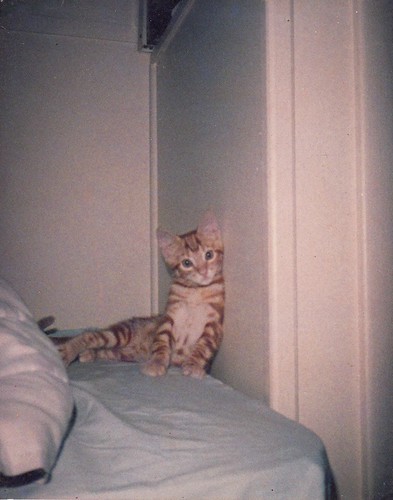 the orange tabby I adopted in college

When I graduated, my folks said there were too many animals in the house and that I needed to find a home for her. I gave her to Ariel and Danny Mellamn. Unfortunately, she ran away soon after. They were too upset to even tell me.

I did not name this wonderful kitten. I was struggling to come up with a name. Leslie suggested Butterscotch. I said that would work temporarily, but it ended up sticking.

I adopted him my senior year at Muhlenberg. I lived in a single that year. I had what we called a husband. I would turn it upside down and shove it between my down pillows and the headboard. Butterscotch would sleep on top of this. Early each morning, he would lean over and nip me on the nose to wake me up and feed him. It was cute!

He and I lived out of my car for much of the spring semester as I traveled back and forth from school to Cape May to manage the Mad Batter. He also had lots of overnights with others while I toured with the Grateful Dead that spring.

He threw up on a jazz CD I had borrowed from the Batter. When I left school to head home at the end of my college career, I stopped off at Tower Records on South Street to replace that CD. This ended up being the first of thousands CDs I would own. The air conditioning in my car did not work at the time and it was hot. Poor Butterscotch. I had no money. I went through the drive-thru at McDonald’s and pleaaded for for a cup of water for Butterscotch.

From the corner of my eye I saw the sun explode
I didn’t look directly ’cause it would have burned my soul
When the smoke and thunder cleared enough to look around
I heard a sweet guitar lick, an old familiar sound
I heard a laugh I recognised come rolling from the earth
Saw it rise into the skies like lightning giving birth
It sounded like Garcia but I couldn’t see the face
Just the beard and the glasses and a smile on empty space

— Robert Hunter, Down the Road