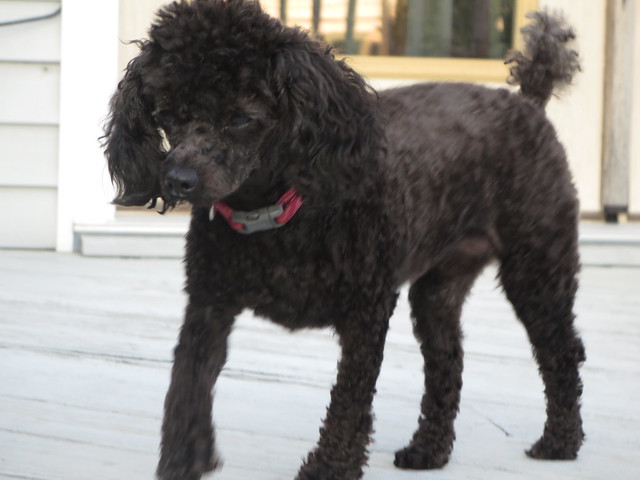 Beetle, like all children it seems, wanted a dog. We said, “No!” She persisted, we held firm.

Our daughter has some issues and they absolutely were manifesting themselves. She had low self-esteem. Things were rough for a while.

My sister visited with her dog Sadie. Beetle was quite mature around the dog. She was responsible for feeding and walking Sadie. Because of that, we re-visited the idea of getting a dog thinking this would be an opportunity for Beetle to be responsible.

We discussed this with her. We explained we were going to look at dogs and she would be able to select the dog she wanted, but her parents reserved the right to veto a selection. We offered some scenarios: big dogs, misbehaved dogs, etc. Beetle understood.

Beetle is shy by nature. We had arranged to visit four or five different breeders. At first, Beetle did not interact much with the dogs. But after a while she got the hang of it as she saw her parents holding and playing with the dogs we visited.

We were certain heading to the last breeder what dog we were going to get. We were in Lancaster County. As the parents spoke with the breeder, Beetle was on the floor with Candy (not the dog we went to see). Candy licked Beetle. That is all it took. Beetle had found the dog she wanted.

We went out to dinner and discussed the dogs. Candy had not impressed the parents, particularly not me. She’s a toy poodle. She was really small. But Beetle was in love!

That was a Saturday. On Wednesday, we drove back to Lancaster to purchase Candy. Beetle loved her immediately. Not me. She hops on three legs. We had lots of snow that first winter. Her legs were too short to stand in the snow.

But the following fall I was home for three months recovering from knee surgery. Candy and I bonded. Pretty Girl was hesitant of my affection. But once she accepted belly rubs from me, it was all over. She would jump up on my lap, lift a paw and demand rubs. How cute!

She was too short to jump onto the bed, so I would have to pick her up. She nestled in close at my belly or my back. She had to be touching me.

She is definitely the beta dog in the relationship with Jacoby. But when it comes to food, she is fierce. Do not take her food! She snarls and growls and snaps at her big brother.

While she never played fetch as balls and toys are generally too large for her, she would hold onto chewies like cigarettes and walk around with them

I love this puppy.

No pain, no gain

— painted on the wall of the shop class, Richard M. Teitelman School