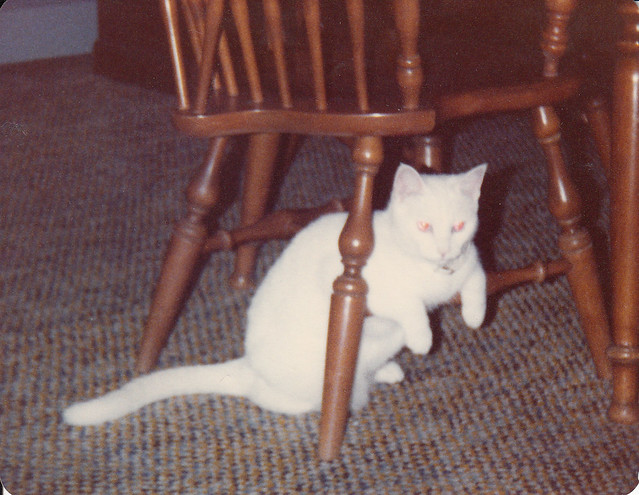 After the passing of Angel, Mom declared, “No more pets!” She had been heartbroken at the loss of the dog.

Some time later (a year, perhaps), a white cat began hanging out in the neighborhood. Patty and I liked the cat. We heard through the grapevine that its owners were moving and not taking the cat. It seems to me they abandoned her, but perhaps there was an arrangement made. I do not know.

As brothers and sisters will do, we argued. It seems to me that Patty was being particularly difficult. The cat was all white with blue eyes. Of course, the perfect name for her was Snowball. But my sister insisted on Snow Bunny. What? It’s a cat, not a bunny. It made no sense. It still doesn’t. My father offered, Son of a Bitch. Ha ha! But he also offered a compromise: S.B. That way both Patty and I got the name we wanted. The cat will always be known as S.B., but it is only because of obstinance she wasn’t known as Snowball. 😉

I loved S.B. I used to play with her all the time. I think because Patty moved onto college soon after we got her, the cat became more mine than the dogs had ever been.

S.B. was deaf. And she was really good at catching birds. She good that Mom hung a bell around her neck to provide the birds with a warning. S.B. still got them!

One summer day I was in my parents’ bedroom watching a Phillies game. The windows were open since we did not have air conditioning. I heard an unusual sound from outside. I looked but didn’t see anything. I heard it a couple more times. Each time I looked out the window, but saw nothing. Eventually, I heard S.B. moan at the front door. I went to let her in. There she was, proud as a peacock, sitting on the front step, all white with blue eyes and a bright red cardinal in her mouth! She laid it at my feet.

S.B. would disappear for a couple days at a time, but alwas returned. She liked to lay under Dad‘s car in the driveway where it was cool.

When I was away at school (1982, I think) there was a flood. We had lots of floods. My parents moved out of the house for a week to the Blue Anchor on Madison (Mr. Loper’s motel) as the Atlantic Ocean was in our living room. Of course, they took S.B. with them. When Mom entered the motel room one time, S.B. darted out. They weren’t too concerned as they thought she needed to use the potty. She didn’t come back.

Dad thought she was living in the reeds out toward the Coast Guard base. He would regularly drive along trying to find her. Alas, she was gone.

Advance five years and S.B. came home. She was wild at that point and wouldn’t let anyone approach her. Dad began feeding her outside. Over months, she warmed up and she eventually came inside.

Mom and Dad had Juan by that time. The young Siamese wanted to play, but the elderly, tired S.B. would have none of it. It didn’t help that I was graduated that spring and came home with Butterscotch. Poor S.B. didn’t know what to make of all these other cats. But she outlasted them all.

Some things in life are bad
They can really make you mad
Other things just make you swear and curse
When you’re chewing on life’s gristle
Don’t grumble, give a whistle
And this’ll help things turn out for the best
And
Always look on the bright side of life

— Eric Idle, Always Look on the Bright Side of Life