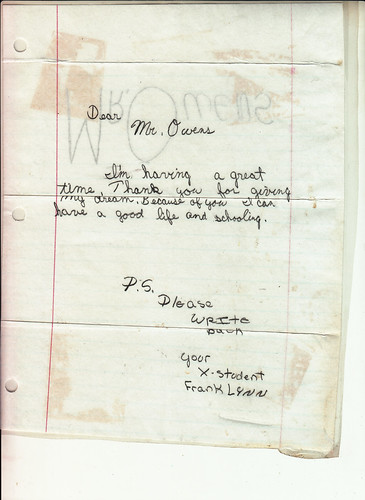 Many years later I created a life list (bucket list). One of the items on that list was to make someone else’s dream come true. I didn’t realize I had already accomplished that.

And that’s kind of how life is, it seems to me. What was nothing to me apparently meant the world to Frank. And perhaps he doesn’t hold the same feeling all these years later, at the time I guess I made an impression on him. That’s teaching!

Folks don’t know the impact they have on others. The girl at McDonald’s in Mays Landing has been part of my life. I am certain she has no recollection of that event.

As I age, I am accepting of this. I figure most people have had a positive effect on someone at some point. Likewise, I am sure we have all had negative effects too. It’s the yin and yang of life that keeps things balanced. As I tell my daughter, don’t get too high when things are going well and don’t get too low when things don’t. Float in the middle and ride the waves. It’s a joy, this thing called life! 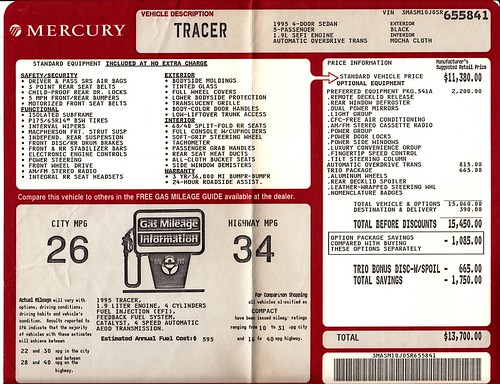 The Mazda 323 was coming around for another round of repairs. It was nine years old and had 175,000 miles on it. I felt it was time to buy a new car. The Mercury was the first car I purchased myself.

I had been so pleased with the Mazda that I thought I would get the same car. I was astonished that I couldn’t buy it for $10,000. List price was $15,000. I didn’t think it warranted a 50% increase in nine years. I remember looking at a Geo Metro. I was getting into it when the salesman told me it was only three cylinders. I bounced right up from the driver’s seat and stated, “Three cylinders does not make a car.”

I looed at the Tracer at Grand and a Grand Am at the dealership across the parking lot. Back and forth I went negotiating. Each salesman would tell me not to tell the other what was offered. As soon as I got to the new salesman, I shared. It was to my advantage. In the end I purchased the Tracer. They tried to stick me for floor mats. I think the gut was surprised I got up to walk out. I got the floor mats. It’s kind of like flying Spirit Air where every little item is charged for.

Laura Taylor’s son had won three season tickets in some raffle. Three seems like a weird number, two or four makes sense, but three? Anyhow, I was invited to a couple games.

This was the 700-level at the Vet. Yeah, not a place for a young boy nor his mother. I remember being embarrassed with some of the antics going on sitting with them.

I am not certain it was this game (I think maybe it was the Rams game), but at halftime there was a high school band that played. They were from school of the blind somewhere in the Delaware Valley. Admittedly, they were not very good. Nevertheless, the 700 level folks booed the hell out of these children. Oh, my! I couldn’t believe it.

I have absolutely no memory of the actual football game.

After visiting Florida, it was time to return to New Jersey to begin teaching again. I used to make these trips in one shot with a stop in a rest area for an hour or two of shuteye.

So, there I was on I-95 outside of Fredericksburg, VA on the Sunday before Labor Day at about 6:00 in the morning. Britches, the hamster, was in the backseat with his miles of Habitrail. ‘Nado was on my lap. She would lay on my lap for the entire trip both ways. Then the car died.

I was able to pull off on the side of the road. The sun had come up. It was lovely out.

This was pre-cellphone days. Well, cellphones existed, but I was still more than a dozen years away from owning one. It was Sunday. It was a holiday weekend. The prospects of rectifying this situation were not good.

And I had pets. The sun was up. It would get hotter as the day wore on.

I got out and began looking for help. None was coming. I remember being surprised that no one stopped nor apparently called for help on my behalf. Thinking the animals would perish, I began to walk.

Somewhere down the road, off the highway, I spotted a farmer on a tractor. I flagged him down. He actually had a cellphone. We called for help.

Eventually some tow guy showed up. I had already planned how this would go. I’d get towed, get a hotel room, find someone on Monday to fix whatever was wrong with the car, and drive the rest of the way home then. Much to my surprise, the tow guy offered another opportunity. He knew a garage that was open on Sunday. I knew it wouldn’t be cheap, but it would save a hotel room.

At the garage, I sat on my chair along with the cat and hamster and the other broken down travelers who got stuck. What a crew we all appeared to be. I recall it was $400 for the alternator. But I got on the road that day. The animals persevered through this . . . along with me. 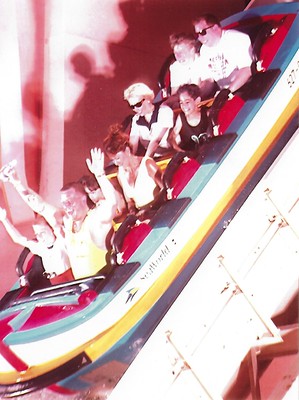 This was my first ever visit to Disney!

Admittedly, I am not a Disney fan. Even so, I always felt like I never got to do the things others did. Silly, isn’t it?

Patty and her children had been visiting Mom and Dad and they all went to Disney. Shoot, I think even Nana went once. Mom and Dad had just purchased their house and I went and visited. They weren’t totally moved in yet. I remember they had a flood in the guest bathroom.

Wanting to show off Florida to me, we went to EPCOT. I don’t think I had a good understanding of how the parks worked. Anyhow, we finally figured out a positive to Dad being in a wheelchair: no waiting in line. I loathe theme park lines. We went to the front of every line. I felt guilty. There were three of us, all adults, bolting to the front.

The thing that stands out all these years later was the Honey, I Shrunk the Audience show. Based on the movies (that I am not certain I had seen at that point), the show went on. I don’t remember much, but at one point, the dog sneezed. At that, little jet sprays of water shot out from the chairs in front of us getting us wet just as we would be if a dog had sneezed on us. I was most impressed.

We dined at one of the international restaurants. Pretty certain Mom and I imbibed. We may have gone to Sea World as well as EPCOT. It seems we had, but I can’t imagine we changed parks. Maybe that was another trip. I do not recall.

Mom was not a fan of the log flume. She still talks about it today. 🙂 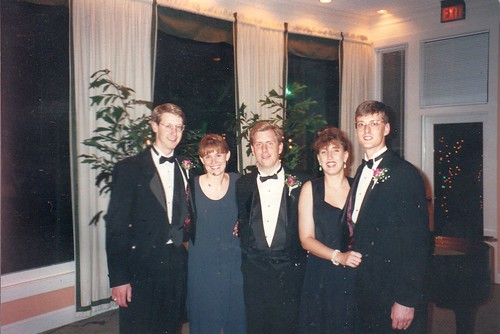 Nearing the end of my first year of teaching and the last of my three friends was married. Fabulous time in North Carolina.

Pretty certain this was the trip I drove down to Richmond to Oli’s and then we drove to Carolina in his new Saturn. Being the gentleman, I sat in the back to permit Lara to sit up front. Well, the Saturn was the first car I ever drove in with the freon-free air conditioning. The technology was not perfected at that time. I sweated the whole way down to the wedding.

The morning of the wedding there was a breakfast at the guest house. Wow! I remember the omlettes to order. This was a party unto itself. I don’t recall the wedding, but the reception was a blast. A lot of SAS folks.

The following day in the hotel it seemed like everyone was dragging over breakfast. I remember reading the newspaper. There was a whole page in the paper about Lilian’s dress. The lace was from here, the veil from there, etc. Impressive! Of course, I felt on the outs as B’s groomsmen were all PhD.s it seemed save little ol’ me. 🙂

It is spring break and I was tutoring a student.  He has cystic fibrosis and has been out of school for the past month.  While I was at his house working in the dining room, the television was on in the living room.  We heard the report on CNN that a bomb exploded outside the Alfred P. Murrah Federal Building in Oklahoma City, OK.  Wow!

We stopped our lesson and watched the report for a bit.  Unbelievable!

From there I drove to Mary’s house outside Glassboro.  Her cat had a litter of three kittens and I had first pick.  There were two black kittens and a gray one.  I was going to select the gray one (being different et al.), but when I reached in, one of the black ones batted me.  She was cute.  Mary said they had named her Diablo because she was such a devil.  That sold me.  I like ornery cats.

The little thing would not come out of the car once we arrived home.  She hid beneath the passenger’s seat.  I eventually coaxed her out.  Once in the apartment, she hid behind the filing cabinet and computer wires for a long time.

I lay down on the sofa for a little nap.  She came out then.  I picked her up and placed her on my chest.  She slept me the rest of the day.  I like her.  She is ornery.  Diablo is not the right name for her.  She is definitely royalty.  Hence forth she shall be known as Queen Goddess ‘Nado the Great.

I have been loved, Edward told the stars. So? said the stars. What difference does that make when you are all alone now?