As I wait for some files to transfer, I took a quick look at Facebook (ugh, I know). I saw this in one of my groups. I looked through the list. I can honestly say I cannot do a one of these. Not a one.

I have already completed this list prior to reading it. That’s a good feeling.

I am a completist. Back in 2010 I wrote about rejoining Toastmasters to complete the Competent Communicator manual that I had walked away from several years earlier.

A similar situation is now in front of me, but instead of pushing on, I am walking away.

I have been working on The Unforgettables cocktails. It’s a list of classic cocktails that the International Bartenders Association (IBA) has listed. It’s been enjoyable, but I have learned a few things.

There are some cocktails remaining on the list I can make with what I have. And then I will work through other cocktails I can make that I haven’t. Then I will re-visit those that I have to use up what I have. I already have some bottles that are like Bénédictine that probably won’t get a lot of use unless I repeat certain recipes over and over.

There will not be a feeling of regret for not finishing this list. I still like to complete things, but this list isn’t something I hold in esteem. It is something I reached for not knowing any better. 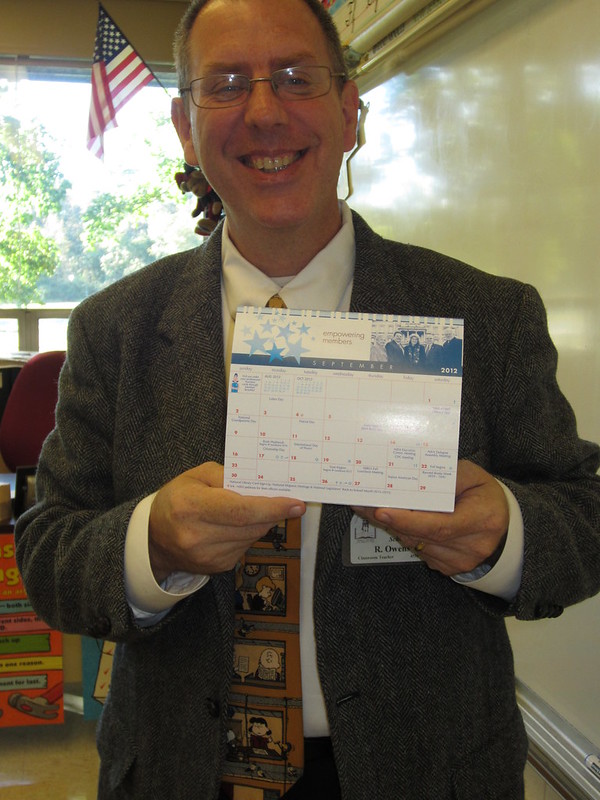 This is the first time in 20 years I ever received my calendar in September. Some years it has been January; most it is October or November. 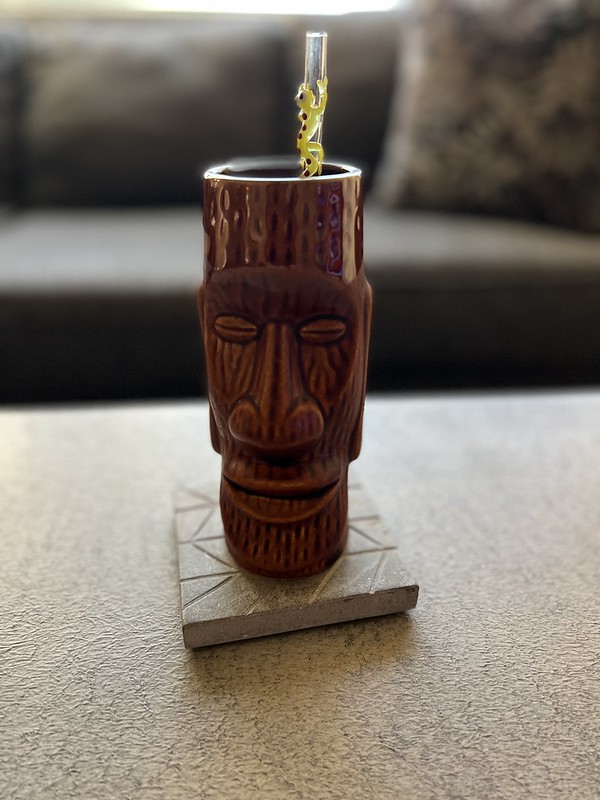 This series highlights the International Bartenders Association (IBA) The Unforgettables cocktails. I have decided to work my way through this series of cocktails to investigate the classics as I teach myself mixology and build out my home bar.

A Planter’s Punch is one of those kitchen sink cocktails. Everyone’s recipe is different. When I first looked at this I was disappointed. This didn’t sound like Planter’s Punch I have had.

I sought sugar cane juice without finding any. Reading many other recipes, a 2:1 simple syrup is used. I made that.

Well, Appleton, lime juice, and rich simple makes a mighty fine drink. I was finally able to use my tiki glass and my salamander straw. 🙂

I’ll play around with this, but I enjoyed it. 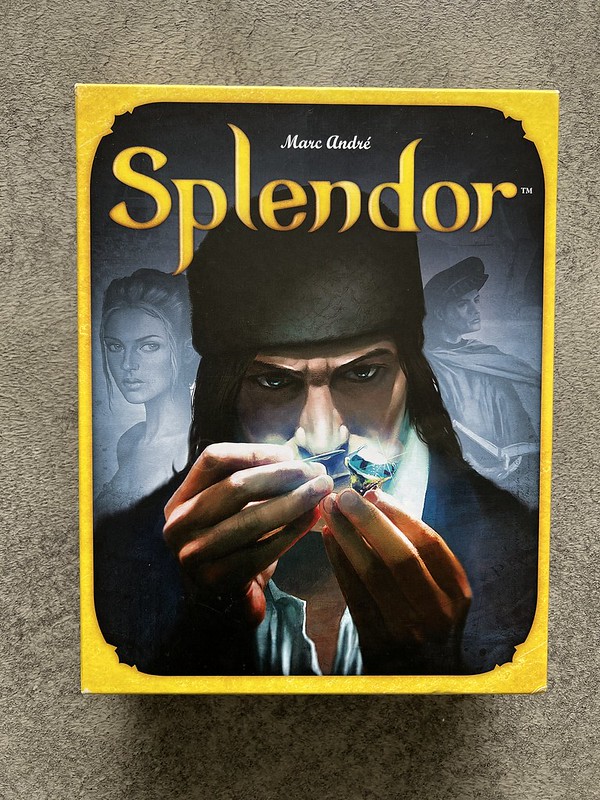 This is a post in the My Things series on this blog. In it I chronicle items I own. I seek to describe why I own the item, whence it came, and what value it provides . . . and any other tidbits of interest.

My sister introduced me to this game. She visited and brought this with her. To save on space, she did not bring the box, just the cards and the discs. I thought that was rather ingenious. We liked the game.

I know we played it at Tiki Tiki a few times. I purchased this because I thought I would be into gaming here at the apartment. That hasn’t turned out to be the case. We play on occasion, but not much.

As this is much better with three people and Fritz isn’t as into this as other games, I thought with Beetle going off to college, she might want it. She has purchased a Marvel version of this game. An oddity, for certain, but it meant she didn’t want this.

I moved it to the discard pile but have now rethought that. I am keeping it. I like the game. Perhaps I will urge Fritz to get with it too. It will be here to play when Beetle comes home from college. 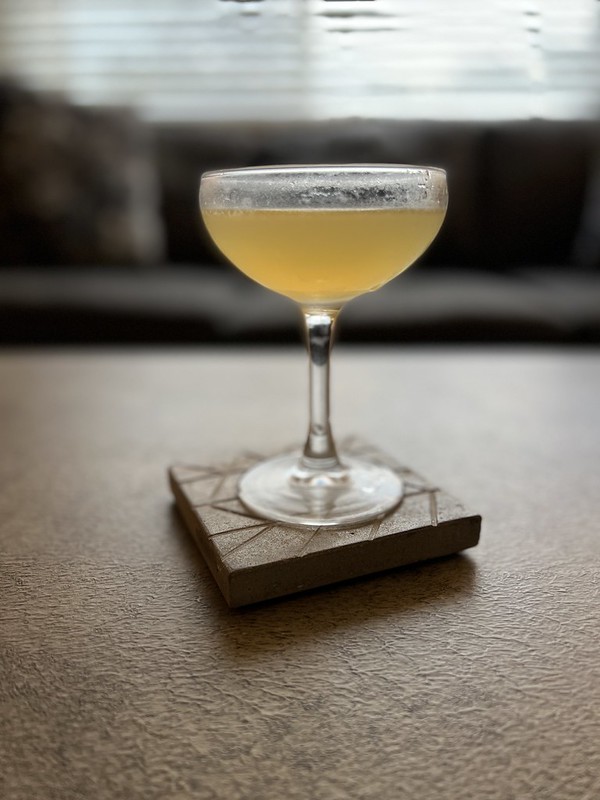 This series highlights the International Bartenders Association (IBA) The Unforgettables cocktails. I have decided to work my way through this series of cocktails to investigate the classics as I teach myself mixology and build out my home bar.

The drink as made is not good. It doesn’t seem to follow the standard for this of 2:1:1. But it is also quite possible that I just don’t care for orange juice on my cocktails. This isn’t the first time I have noted that.

Made a second one following Difford’s (1.5 oz. gin, 3/4 ounce apple brandy, 3/4 orange juice, 2 dashes orange bitters). This was better. I still don’t think I care for orange juice on my cocktails, but the cocktail was balanced. It also produced more volume that filled the glass. 😉 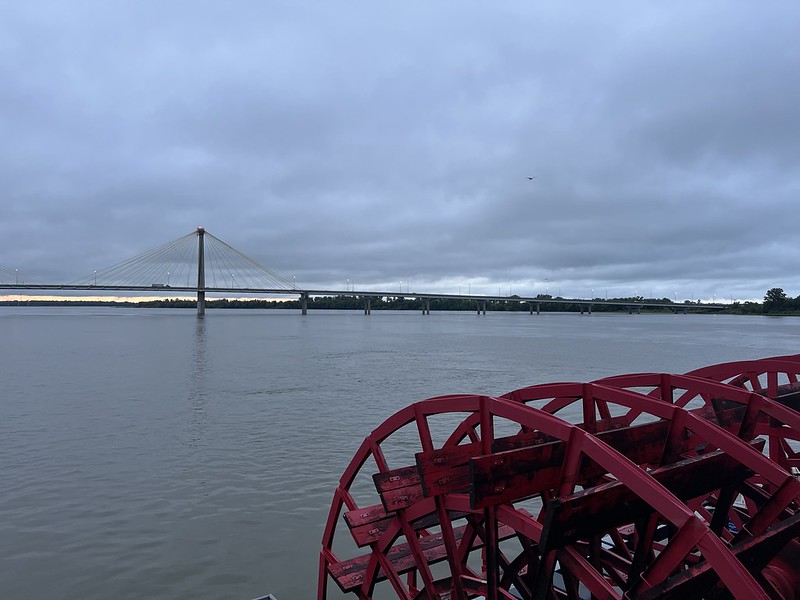 Our wonderful cruise on the American Countess ended today. We awoke in Alton, IL and after breakfast disembarked, got into a rental car, and drove to St. Louis across the river. Neither Mom nor I had ever been to the Gateway Arch. I learned that it was completed after I was born.

I was unsure as to how far up we could actually go. The thing is an arch (actually a catenary curve) after all. But we learned/experienced that the architect, Eero Saarinen, built the elevator so the capsules (similar to a Ferris wheel) would swivel on the tracks going up. One could see how the tracks bent as we ascended. Pretty kewl!

The one drawback that i think could be solved is that the windows at the top had moisture/condensation on them. We felt some sort of wiper could be deployed to permit better views.

We toured the museum/visitors center and then watched a movie about the construction of the arch. That was rather interesting.

There wasn’t a lot of time before I needed to be at the airport, but we squeezed in a visit to Sugarfire, a nearby barbecue restaurant. Patty couldn’t find a parking spot so we took the food to go. The brisket was very good!

We ate at the airport where I was able to complete two Adventure Labs before flying home via Chicago (another Adventure Lab at Midway). The flight out of Chicago kept losing time. In the end we landed about 90 minutes late. I arrived home hungry and to a mess of the rumtopf having leaked on the counter. I cleaned that up, got the laundry going, and went to bed.

A fun vacation is now in the books! 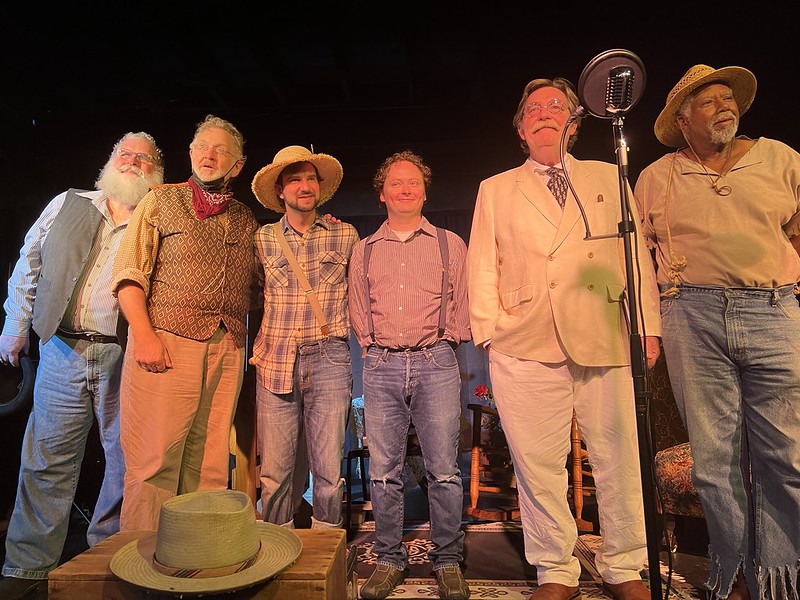 At the show last evening, the cruise director mockingly mentioned that we would take Mark Twain Road, to the Mark Twain Museum, eat Mark Twain ice cream, etc. Someone else mentioned that the town wasn’t much other than the Twain stuff. With that as a background, I didn’t have high hopes. As it turned out, this is a most endearing little town. We wanted far more time here than we had.

Some stops in port were shorter than others. We suspect this was due to traveling slower due to the Z Drive issue. So, Hannibal was a mere four hours and we had booked a show. I was a bit wary after yesterday’s show not living up the expectation. Fortunately, this one did. It was right good.

Someone wrote an adaptation of Orson Wells’ Huck. It was performed by the Muddy River Radio Theatre players. This was a similar production that the children and I saw last fall of Wells’ War of the Worlds. We very much liked this performance!

After that we toured the Mark Twain Museum. This included his boyhood home replete with the fence! Across the street was Beck Thatcher’s house. Out back was Huck Finn’s. There was also a pharmacy across the street that the Clemens family lived in for a brief period of time. All real. I guess I had never put it together that these stories were based on Samuel Clemens’ real life. Heck, we learned that the cave existed and there was a winery there.

But that is where we ran out of time. We were at the art museum with 15 of the 16 Norman Rockwell paintings he did for The Adventures of Tom Sawyer when the town’s power went off. There was construction in the area (laying optical lines). We figured someone cut a wire. The entire town’s power was out. We also didn’t have time to get tot he winery and back to the boat in time. We were disappointed as there was a lot more to Hannibal than we got to experience. Next time.

On the boat we ate and drank although I was mellow still soaked from a week’s worth of drinking with Mom. We had the farewell toast with the crew before dinner. There was another show and more time just watching the Mississippi River.

Mom, Patty, and I listened to the band in the lounge and talked later than we had any other evening. It was the last evening together. 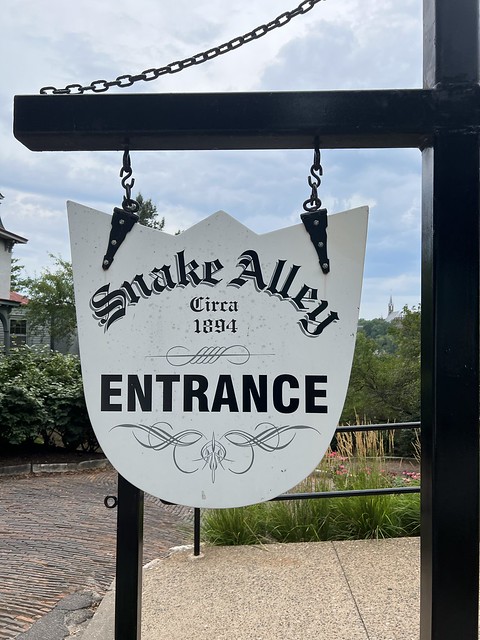 Our stop in Burlington was where we selected to do the premium experience. Bart Howard wrote the standard Fly Me to the Moon that Frank Sinatra made popular. He wrote other music too. Howard is from Burlington and there is a Bart Howard lounge in town. We signed up to hear a band play in the lounge. Everyone, including me, expected a nightclub act. Nope, we got a hillbilly group. Yes, when some old lady called out Fly Me to the Moon, they played a hasty countrified version of it. Frankly, it sucked. The scene was reminiscent of when the Blues Brothers played the club with chicken wire. 🙂 The band was okay. Once I realized we were never going to get what we expected, I got with the banjo playing. This gig was universally not liked.

After this, we went geocaching. We found an Earthcache right outside the lounge, took the bus back to Mosquito Park for a quick one, and then one at the welcome center. As we left the welcome center there were railroad tracks between it and the boat. Sure enough, a trin came by. An older couple scooted right in front of this train. They didn’t make it by much. The train honked very loudly.

Onboard we ate and drank and took in the show. Tonight the cruise director and his wife performed Bob Fosse songs. It was all right.

I ended up the day on deck chilling to the boat paddling down the Mississippi River. I love it out on deck at night. 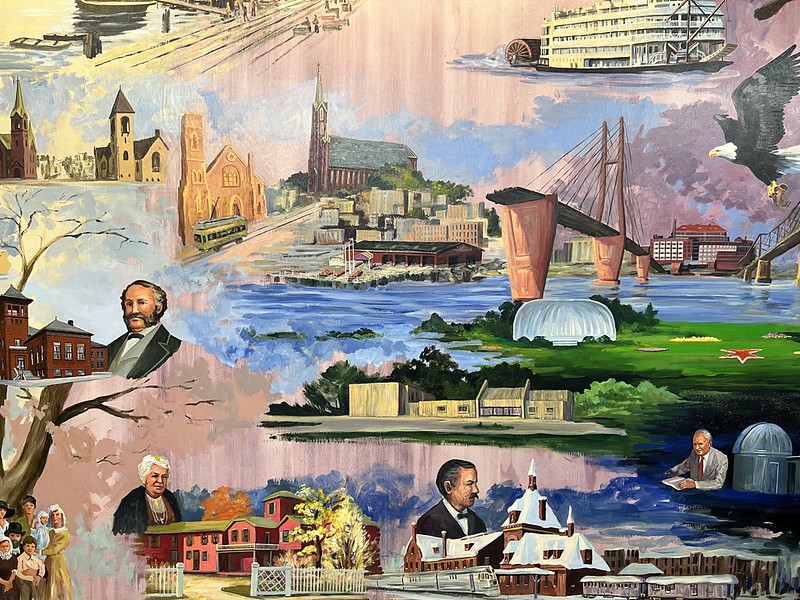 It had been a grand day in port, but it was time to return to the boat to continue our voyage. We had to pass through here to get there, so why not find this? Like the cacher before us, we were told we found it faster than most. I think we had it before we were completely there. 🙂

Had a nice chat with the folks there.

Burlington is a nice town. We enjoyed our time there although we almost witnessed two folks get smashed by a train as they jumped in front of it. Silly.

Man is born free, and everywhere he is in chains.