The amount of stuff folks carry while traveling is staggering. Watching folks fiddle, drop, pick up, sort, move about, etc. is almost humorous . . . Just realized that I do not pay bills like I used to. Every bill is paid online, all but rent is via auto-pay . . . The way I keep food promotes good health now that I vowed not to dine out unless I am traveling. Here late tonight I am snackish, but there is absolutely nothing I can snack on. Fewer calories in . . . The home screen on the iPhone has but three icons: Google Keep (notes), Google Calendar, and the camera . . . Additionally, there are no sounds emitted from the phone. The ringer is off and there are no notifications so no vibrations. If I want to see if someone has called or messaged, I have to actively click on those things . . . I’ve long thought that fresh, natural ingredients are the path to a healthy diet. As I take on expanding beyond the minimal carnivore diet I have embraced, I think I am committed to not bringing on a blender/processor. I should be able to make what I want in a traditional style. Let’s face it, Nana didn’t cook with a Cuisinart . . . Dropped something off to my son. He came out of the house with his finger bookmarking a page in a book. 🙂 . . . Almost a year ago I was promised photographs. Nada . . . Two months ago I was promised a phone call (and a kayak outing). Nada . . . Haven’t spoken in the last two days. Other than one text each day, I’ve had no interaction with anyone. Makes me wonder what I said aloud on Thursday . . .

Remember what happened tonight. I thought about stopping by Glasstown Brewing tonight after I drop Fritz off. I didn’t because I didn’t get excited about drinking beer. This will prove beneficial when I return to planning out a multi-thousand-dollar home brewery . . . I am a sugar addict. Breaking this sucks as I crave the sugar. Stay out of convenience stores, the principal’s office, etc. I am stronger than sugar. I am stronger than addiction . . . Had a rough day on Friday at work. Frustrated that students aren’t learning nor are they following my advice. Why should they? I should not impart advice; I should teach academics. My story is not inspirational to these students. It does not resonate with them . . . News today is the same as it was 17 years ago. Just like a soap opera. One could not pay attention to the media for whatever period of time, pop back in, and not feel as though he has missed a beat . . . Thought I had taught my children to thank others for their kindness. I failed. Sent my son a book he wanted. It arrived today. Silence. Maybe he didn’t get it. Maybe he’s engrossed in activities with the new guy. Perhaps he didn’t think to acknowledge his father . . .

Somehow I permitted Coca~Cola back into my diet. Now I am going cold turkey (enjoyed the movie). Have had a low-grade headache for two days now . . . I am on forced self-quarantine. It certainly seems as though freedom and liberty are squelched in such times . . . Speaking of liberty, there is a call currently for those interested in running for the NJ senate next year from South Jersey as a libertarian . . . I need to cancel Audible. I have a bank of five credits, but can’t find a book to listen to. Either I can find the audiobook for free on Overdrive and Hoopla or I feel I need to have the Kindle version to read along with. And I think that’s the issue, Amazon has done a good job of creating a need for two purchases for the same story . . . Ah, I recognize just now that I am looking to do something. Reading isn’t doing it for me. Just pulled out my list of things to do. See you, I am off to do something else . . .

Proud of my Beetle. She stepped up and sang at her grandmother’s funeral. She sings beautifully . . . Also proud of myself. We had lunch out at a restaurant with a limited menu. I opted for the cheeseburger. The cheese was melted on the bun, not the burger. Came with French fries and lettuce and tomato. I ate only the crappy burger. Wanted the fries. Stuck to my meal plan . . . The Minimalists try to “out pithy” one another in their live events. Reminds me of “speed poetry” back at the ‘Burg. Juvenile . . . Another The Minimalists conundrum: don’t be brand-specific or obligatory, yet we need you to leave an iTunes review. Bah! . . . I know I am nearing the end of my career. I am unwilling to take on some new initiatives (like re-building a classroom web site) as I don’t want to do all the work for a year or two left in the classroom . . . Also, with the re-districting next year, lots of people are leaving our school. Those of us who remain tend to be the experienced (old) teachers who are unwilling to roll the dice with placements in a new school . . . Haven’t watched a baseball game et this year. Can’t watch the Phillies because we no longer have the local channels. No longer have the MLB package. Not really missing it. I used to think baseball was different than the other sports in its commercialism. It isn’t. They want to extract money from me. I am unwilling to spend on it . . . I became a teacher because I wanted to give back to a community. Twenty-four years later, I am disillusioned . . .

Originally, I had planned on geocaching Delaware today. Because of that, I weighed in on Sunday. 234.4. That’s down four from last Monday.

Then there was talk of snow. Later it turned to rain and cold. Just doesn’t feel like the pretty spring day I envisioned. Because of that, I remained local today. I got on the scale again. Fearing being up from yesterday, I held steady at 234.4.

Went and did one cache in the cold and rain. Decided I didn’t want to spend my day doing that. I cam home.

Happy weight is coming off. Would love to be in the 220s next week. 🙂

I hate the scale!

I tell myself not to weigh myself daily, but I do.

The first two weeks, almost, were a joy. Daily numbers were so pleasing. Then a stall. Then the scale went funky. Yesterday, I got a number I liked. Encouraged again.

Despite eating cleanly, I gained a half pound. Sigh . . .

Just forget that thing and do what I am going to do.

My knees feel great! Twenty pounds gone. Yet, when I was gaining weight and I was at this current number, the knees were sore. I am certain that when more weight is gone, I will feel even better.

I purchased a new belt at the beginning of the year. I needed one because I’m fat as well as the other belt was in bad shape. I am on the last loop of this thing. I may have to add some more holes to this belt.

This is a journey and I am re-learning my lessons. My two lessons this week:

1. wine kicks me out of ketosis
2. remember to request sauces on the side (or not at all)

Yesterday I weighed 210.8. How the hell did that happen? Today I am at 207. Better but still unacceptable.

My diet has been crap. I can feel it too. When I eat pizza, cookies, cupcakes, cereal (particularly the cereal), I feel almost nauseous. Seriously. My stomach gets all in a knot.

I’ve been eating candy for a damn year now. That has to stop. And obviously, I haven’t mastered much; I wolfed down a pint of Ben and Jerry’s on Saturday.

It all stops now. I know in my head that I do this to some extent because I know some of the weight will fly off. I have seen how it works when I eat a strict paleo diet. I’ll be under 200 in a week or so. But the thing is . . . that isn’t good enough.

I never quite “finished” my weight loss last year. Sure, leaving Dan was justified, but I didn’t keep up my end of the bargain. It is time to recommit.

Starting Strength will be read this and finished this week. Then comes a commitment to it and the 100 Push-up Challenge. I want to continue both until the new year. At that point, I will reevaluate Starting Strength. I am rather certain I will not follow it religiously. Rather, I will get myself active and then lift twice a week hard, using SS as to how to do the lifts, but not the program. The reasoning for that is that I am not looking to get strong like I think the program is designed for. I actually want to get small but add some strength as I go down. I was well on my way at 177 last year.

I want to get to where I long for exercise. That was a damn good feeling I had last year.

Presently, because we are so broke, lots of eggs and vegetables. I’ll make my fatty tonight sans cheese.

There’s a new mountain bike trail created at Belleplain State Forest. I don’t think it is quite finished yet, and there are no maps. Yet, it is there. I rode down today to ride it. It kicked my butt.

While there are no inclines (we live on a plain), the tight turns drained me. I think I am suffering from low-carb flu anyhow. About halfway through this, I was beaten. I finally decided to abandon the trail. I did that when I was switching back on what I had already done. I am not quite certain how the back was supposed to go, but I hit the roads.

Technically, I am pretty certain I added more distance, but I improved my time. This took a lot longer that I expected and I had to get back home for an event. And my butt had been kicked sufficiently.

I’ll ride this again. I need to build my stamina. 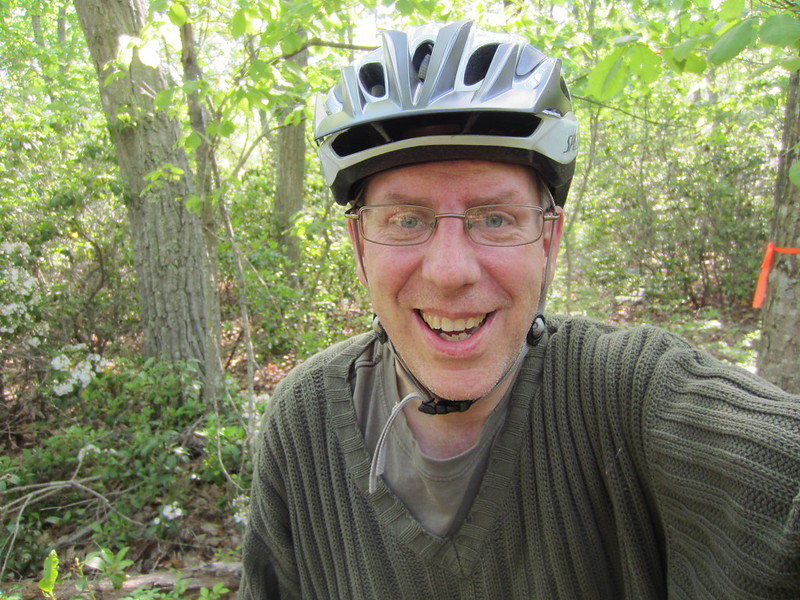 I set myself up for depression. It’s something I’m beginning to see that is a pattern.

Yesterday I wrote about the letdown I felt regarding not being asked to serve as club president of my local Toastmasters club. That put me in a funk. I understand this isn’t a conspiracy against Robert Owens, yet it is another low moment for me. So, what did I do to follow that up? I set myself up for more depressing news.

I quit my personal training back in early November. It was for a good reason. But I’ve gotten over that and the plain fact of the matter is that I’ve gained 30 pounds since. Not good. It’s not that I’ve given up personal training; it’s because I have fed my face and not gone to the gym like I should. I am unfocused. Personal training helped me focus.

On the heels on being dissed last evening, I e-mailed my former trainer and was pleasant. I suggested we start up again. It’s something I’ve been contemplating for a few weeks. In my head I hadn’t done so until today because I know it doesn’t make sense to go back to this guy. After all, he assaulted me. Why the frig would I go back and pay him for the pleasure? But no, today to “lift” me out of my doldrums, I e-mailed him. I knew it wasn’t going to work. He just e-mailed me. He was pleasant, but he said no.