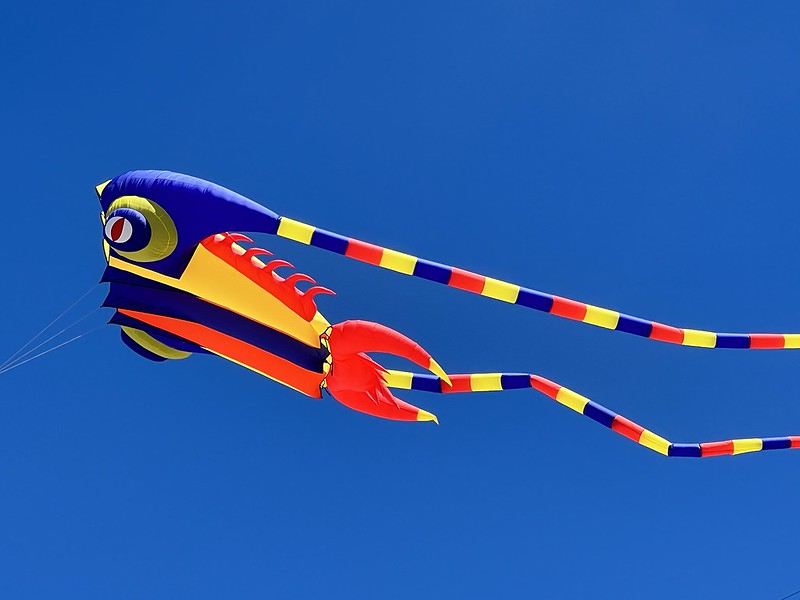 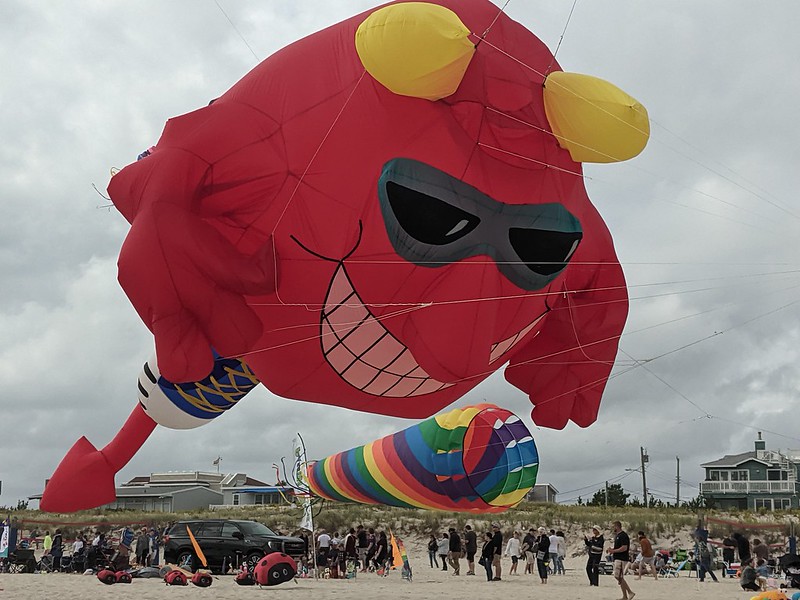 This fantasy self image I have collides with reality. Last weekend I had the Ocean City, Maryland kite festival on the agenda. When we awoke, I could not convince myself I wanted to drive three hours each way. We did not. One of the factors was that this festival, far closer, was but a week away.

Funny thing about being a working person is that even an hour, 17 minute drive is enough to make one want to bail. Our designated destination time came and went and there we still were in sitting pondering the day. It was overcast and I wasn’t motivated to drive.

But I rallied and got the children moving too. The drive wasn’t bad. As we approached LBI, we could see kites in the sky. Frankly, it didn’t look like a lot and I thought this may be a bust.

Traffic felt close to summer season. Police were out directing traffic in Ship Bottom. Was able to secure a parking spot, which I felt lucky to have done. Once our feet were on the sand, we could see there were far more kites than we had been able to see from afar. It was a perfect kite flying day. Lots of kites. Lots of people.

I thoroughly enjoyed walking about seeing all the kites. I actually recognized a couple of them! Beetle would have preferred not to be there. Fritz was indifferent. He liked the squids, which I think were the largest kites we saw.

I didn’t see as many of the huge kites as I thought there would be. Even so, I was impressed.

In the water were five or so kite surfers. A couple of them had gotten some serious air. Of course, when I got close and filmed, no one was airborne. Still, impressive. Fritz and I rolled up our jeans and put our feet in the water.

The last area we saw were stunt kites. Nice kites.

All in all, I enjoyed it. I would have gladly spent a lot of time on the beach, but the watotos were not quite as into it as I was. I had promised them lunch. We tried to eat on the island, but didn’t want to wait 35 minutes to be seated. We picked a place, the Hang Time bar and grill in Absecon. Absolutely horrible. We waited and waited. Food was not good. We were tired and cranky and nothing about this experience was good save that we all bonded together in our dislike for lunch. Hey, at least we were on the same page!

For whatever reason, I wasn’t quite with it today. After not doing much early on, I got out and about. I returned and prepared the week’s lunches and cooked my lunch today (nice double pork chop). Watched most of the Eagles game, just because. Also worked on the My Things series. As the football game was wrapping up, I started the 1.5″ NY Strip and then headed out again.

Drove down to Fortescue. Lovely late afternoon. Tide was receding, but still up. I decided to get out and launch the Rocky Mountain Conyne.

This kite went up and flew pretty much above me. As soon as it launched, a most beautiful appeared. We chatted some. She’s taken, but we had a good time there on the beach. Nice wind today.

Enjoyed walking through the water. Perfect!

The launch, flight, and descent of the kite was absolutely wonderful. No issues whatsoever.

Stopped off at Glasstown and met three guys who ran the tires for the motorcycle races for the series. Really interesting. 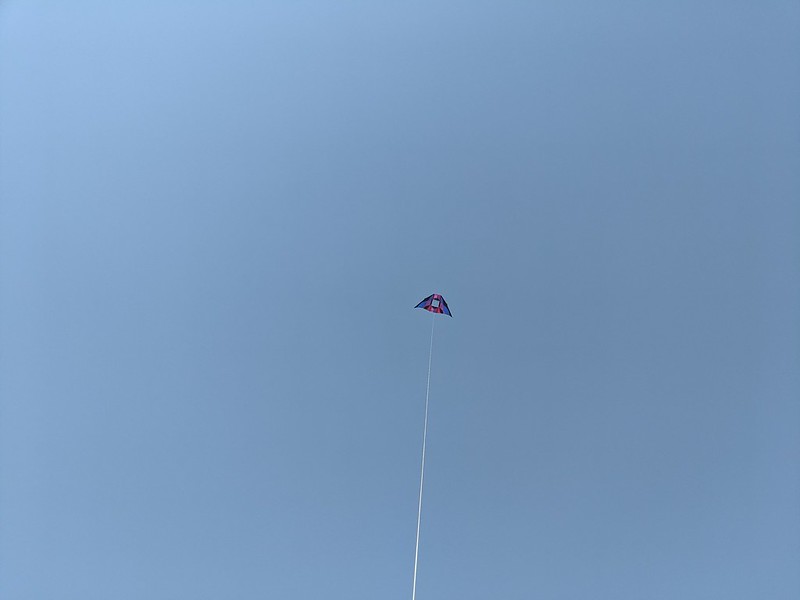 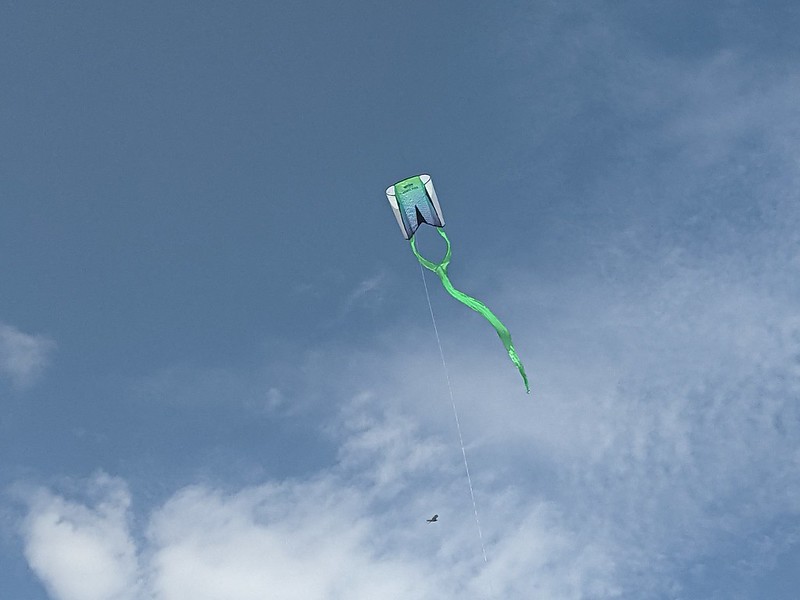 One’s fantasy self is dangerous. Because of it, I have purchased some kites. I envisioned having a kite, pulling over while geocaching, putting up the kite, smiling, and chilling.

The delta I purchased is nice. I like it. It requires wind. The conyne is nice as well. It requires even more wind. I keep seeing these pocket flyers that I thought would be perfect. Lightweight, convenient, should fly in light winds.

I purchased three of them. The idea was that the children and I would have these to play with. Yeah, that didnt go well.

Today I thought I would put this guy up. The wind was blustery. No need to drive to the beach, we can fly in Millville. The soccer fields had folks, so I went across the street to a cleared field at the inductrial park.

The kite got up. Plenty of breeze . . . until a lull. As soon as the breee backed off, down came the kite. Over and over.

Kites should fly in a breeze like we had today. This didn’t. I didn’t like that this wouldn’t fly. Disappointing.

I probably need someone to guide me with kiting. I keep wanting to get a zero wind kite, but am hesitant to spend that kind of money until I have a better handle over things in this regard.

Perhaps kites are the latest electronics purchases. Maybe I need to nip this in the bud. Damn fantasy self! 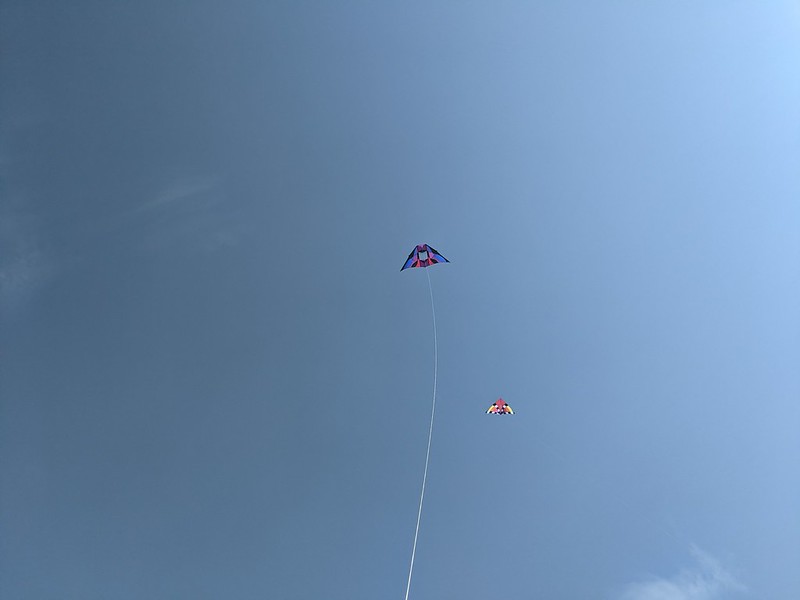 Decided to head to Cape May to fly this morning. My thinking was Poverty Beach early. Yeah, didn’t happen. First off, Poverty Beach now requires beach tags. 🙁 More problematic is that the beach is now cordoned off. With sunbathers already present there was not enough room for me.

I then went to the south point past the Jetty Motel. That too is cordoned off. It doesn’t even look like one can walk to the lighthouse from here. 🙁

Next stop was Sunset Beach. There is a new parking lot. That’s nice. There is signage welcoming one to Higbee Beach WMA. That is new. While this area is part of the WMA, it was never highlighted as such. A stroll out to the beach brought bad news as sunbathers were already crowded on this section. Really?

I relocated to the regular Higbee Beach entry out New England Road. The lot was full. I turned down the hardpack to go to the ferry jetties. Yeah, there was room here.

The Levitation went right up. Beautiful wind. I was near what’s left of the tree of life. I eventually tethered the kite to it and used the stump as a chair. Smiles. 🙂

After a bit, I tried to get the ITW Rocky Mountain DC up for its maiden flight. Yeah, didn’t happen. The wind was rather calm. While the Levitation was up and holding steady, launching something else didn’t want to happen. I put it away for a while.

More folks showed up and strolled along. I gave the Rocky Mountain another go. Still nothing.

Loved being on the beach this morning. The Cape Henlopen sailed by. Other boats and jetskis motored by.

I then attempted the Rocky Mountain again. Up it went! 🙂 It definitely feels like it needs more wind than the Levitation. It went up, but not quite as high as the Levitation.

Nice to have two kites in the air at once.

The wind became a bit inconsistent. The delta that had held strong all morning, began moving about. The Rocky Mountain was falling. I tightened it up, let it out, tightened it up, etc. for several minutes. Then I brought it down. Then I decided to bring down the Levitation. All was going well and then the wind disappeared. Down came the kite. On the dune. In the briars. Yikes!

It took a little bit to retrieve it. I got a few briars embedded in me, but I got it.

In the end, I flew for about an hour, 20 minutes. Wonderful way to spend the morning.

Recently, I purchased an Into the Winds 9-ft Rainbow Levitation Delta Kite. The children didn’t want to fly kites. After they left, I decided I wanted a pigtail. Air Circus did not have any, and I was unwilling to purchase the 500# line for the price they had. Yesterday, I drove to Ocean City, Maryland to Kite Loft. Twenty-five years ago I drove there and purchased a stunt kite. I returned for a pigtail and some other things. That turned out to be a conyne kite.

Today I vowed to fly my kite. It came with some struggles. I decided the soccer field would be a good close-by location. When I arrived, there were workers on the fields. I didn’t think I should walk onto their fields. I decided to head to East Point. Got out and was prepared. Yeah, high tide. There was no beach to stand on. Next up was the Myron Powell School in Dividing Creek. Got set up, but couldn’t get the kite to fly. The flags in the cemetery were waving, but there didn’t seem to be enough wind to life this nine-foot kite. After struggling for 20 minutes, I picked up everything and relocated.

This time I went to Fortescus. As soon as I got things set up, four guys showed up to go swimming. I struggled getting the kite in the air, but eventually I did. It was up for a while. When I took my attention off the kite, it fell. 🙁 I struggled getting it back up. But I did. I had a much better time of it then. I was good at keeping the line taut. All was enjoyable. Then, without warning, the wond died and down came the kite.

The beach is small and the kite was flying out over the water (Delaware Bay). I couldn’t get the line taut quickly enough. The kite ended up in the bay. Immediately, one of the guys swimming nearby came over and rescued the kite. I was appreciative.

The delta flew steady. I was reminded when I first got into barbecue the advice was to cook a pork butt as they were forgiving for the novice cook. I think deltas are similarly easy for the novice kite flyer.

All tolled, I flew 30-35 minutes. It was wonderful. I have plenty of room for improvement, but things were fun. I look forward to my next outing. 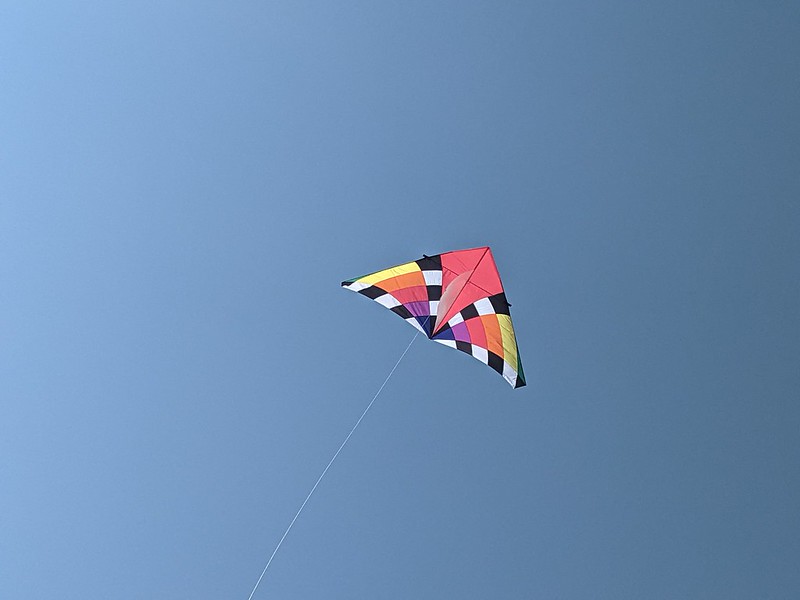 I am nothing, and not even that.