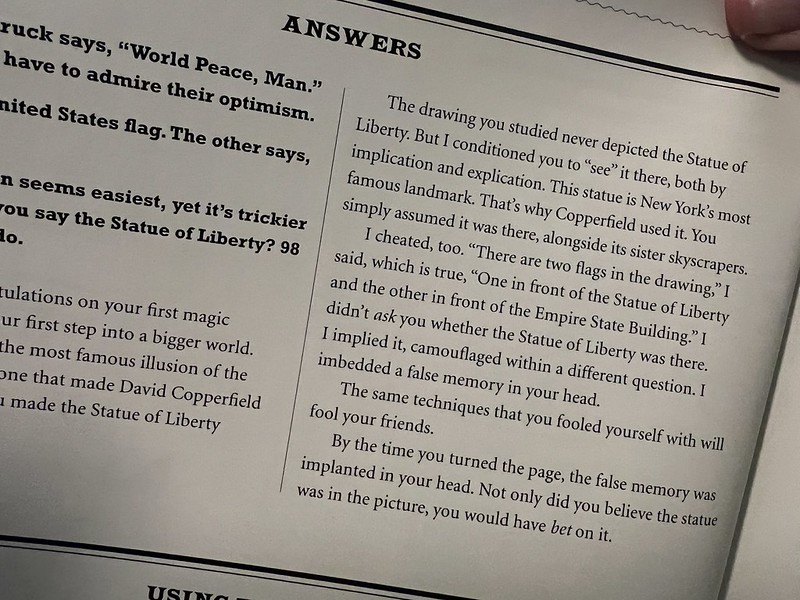 Recently, I thought about magic again. My thinking was to practice the Three Card Monty with Four Card routine I have always wanted to master. I toyed around with buying the cards for that, but ended up not doing so.

Tonight I ran to the Vineland library to pick up a book. I had come across it a couple times as I work on presents for Beetle’s graduation. I am pretty well set on a book, but this sounded promising (not so, in the end).

Anyhow, as I walked into the library there was a display of books prominently in sight. Yup, magic books. Perhaps this is my sign. After retrieving the book I came for, I looked over the magic books that were out. One caught my attention. Why not?

Now I am reading the book. 🙂 The first exercise had me look at an image for 30 seconds. That was quick. It was a drawing of New York. I have done stuff like this before. I tried to process as much as I could. Thirty seconds is quick. I had to turn the page and then answer two questions based on the image I had just studied.

One of the questions baffled me.

In the “reveal” Jay shares that it was a trick as there was no Statue of Liberty despite there being a flag there. Yup, nailed it! I knew the statue was MIA.

I think I have learned in life how to look for certain things. Perhaps, just maybe, I am ready for this. 🙂 If so, I chalk it up to spending Sunday mornings solving this kind of puzzle from the funnies while wolfing down my cereal. 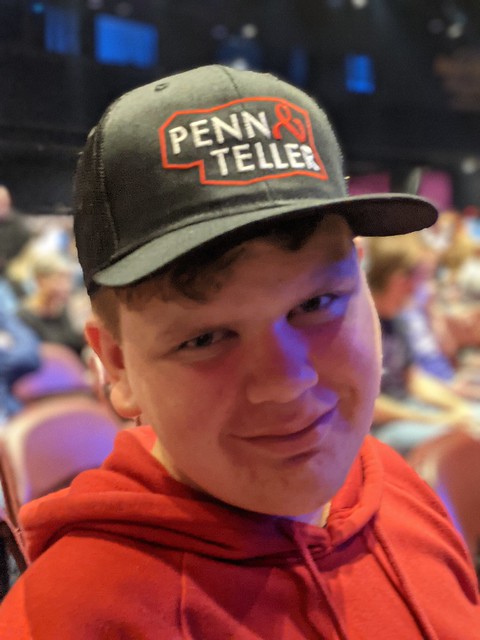 I surprised the boy. 🙂 Tonight was round two of Christmas gifts for the children. Unfortunately, Beetle was not able to attend this evening. Not to be deterred, I picked up Fritz and drove to Atlantic City.

We dined at the Hard Rock Cafe. We each had a nice cheeseburger and French Fries. Then we headed to the theatre for the show. Unlike the last time we were here, we sat fourth row. Good seats, but we were unable to see the Penn & Teller sign. The show was not sold out. 🙁

I expected this to be pretty much the same show we saw three years ago. It wasn’t. Three tricks, I believe, were repeated (nail gun, flower shadow, and Love Ritual). Lots of new stuff, which I appreciated.

The show was most entertaining. These guys are good at their craft. It’s my kind of humor and magic. Figured out the Heads/Tail trick early on. I knew they had picked the winner from the get-go; we didn’t stand a chance.

They performed for an hour and 45 minutes. Good times! Purchased Fritz a baseball cap and a program. 🙂 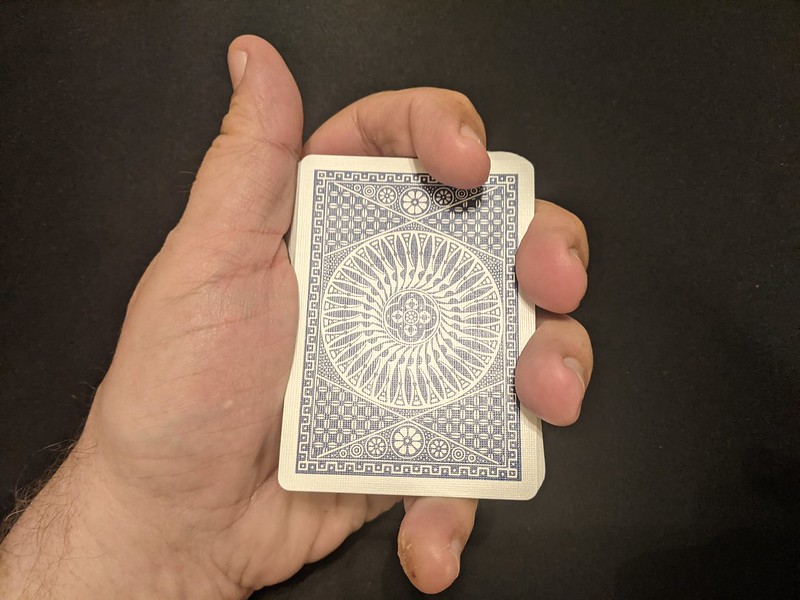 Today I began reading magic websites again. I’ve been into magic since I was a boy. I’ve never been any good, but I like magic a lot. This time feels a bit different. I’ve been into it (and out of it) several times. Like many other pursuits, I realize that I get all gung ho, deep into things, and then bail.

I’m longing to follow a sensical approach. Not certain what that is at this point, but I do have some thoughts. As I considered some things, that led me to others, which led me to others.

I grew up in a card family. My parents played bridge daily. Even within the family, we played Hearts, Spades, Canasta, and other games all the time. I learned to shuffle and bridge pretty early. I can count cards. I can follow bidding and determine where cards are. I am nowhere near the level my parents are/were, but probably more advanced than the normal person.

I am lefthanded. I deal righthanded. I am certain that is because my parents taught me to deal (at least I suspect they did; I don’t remember).

The grip I naturally use is called the straddle grip. This is my natural grip. I wanted to know what that was before I “learned” anything.

What is your natural grip? 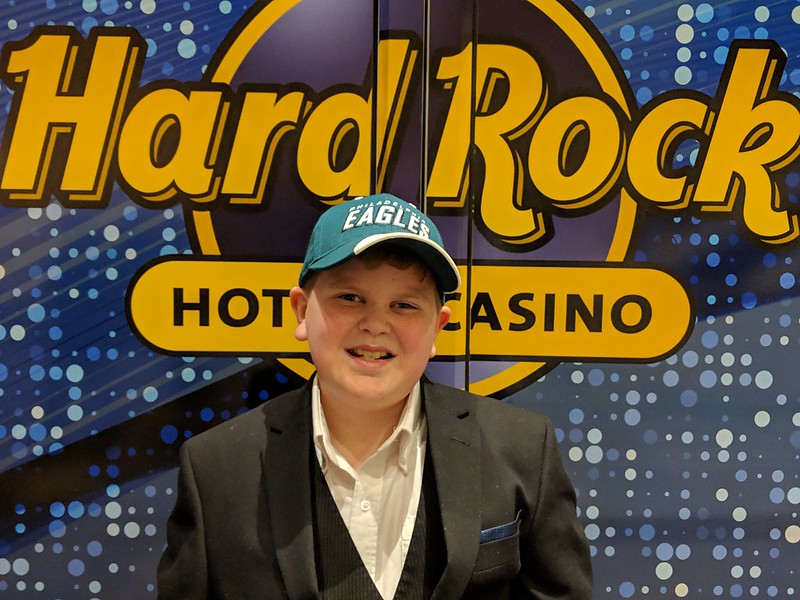 Beetle has visited NYC a few times for Broadway shows. Fritz (understandably) asked when he would get to see something special. As the brother who never went to camp while his sister went EVERY summer, I sympathized with my boy.

He and I watch Penn & Teller’s Fool Us. We like it. Of course, I am a long time Penn & Teller fan. When they last came to Atlantic City, I looked into tickets too late. Seats were far too expensive.

I heard David Crosby was playing North Jersey on 5 December. I floated going to that show by Gert. She said I should go. It was mid-week, which would necessitate a day off. I would go it alone. I wasn’t sold on the event, but intrigued. I went online to check things out. When I did, I saw that Penn & Teller were returning to Atlantic City on the 15th. Well . . .

So, yeah, we went and saw magic tonight. 🙂 We had a really good time. Fritz loved the event and was so thankful for us making it available to him.

In addition, I saw my cousin Sherry there. She’s always in Atlantic City. This is the first time we’ve seen each other since my wedding 16 years ago.

The show was pretty much what I expected: all tricks that we had already seen. I don’t think there was one trick I hadn’t seen before. It did not affect the fun. I do think I figured out the nail gun trick, finally.

Much like speakers, familiarity adds to the fun of the event. And really, Penn & Teller do the same thing the professional speakers do. It’s all a show, carefully crafted one word at a time.

I would like to see them again, but in Las Vegas. I do believe they would have more tricks available (bullet trick, for instance) in a permanent show.

Fun times and I am happy we went!

The saddest day of the baseball season is the day after the All Star game. Everyone is traveling so there are no games.

Not to fear, here is some baseball content from Penn & Teller for you to enjoy.

I recall seeing this on television. It is as good today as it was 26 years ago. Perspective, baby!

Shadowboxing the apocalypse
And wandering the land