Handbook of Model Rocketry by G. Harry Stine
My rating: 4 of 5 stars

Saw Millville Public Library had this and picked it up. I wasn’t expecting much with it being more than 25 years old. I figured things have changed since then and this will satisfy my enthusiasm until my rocket arrives. This is turning out to be a much better read than I thought. Love how Stine writes. It hearkens back to a time prior to the PC-police. He tells the reader he is stupid if he does certain things. It’s refreshing. Stine sounds like many of the adults who guided me to adulthood. I like that. And most of what I am reading is still relevant all these years later. I do laugh at the references to phone books, phone chains, Radio Shack, and BASIC. Yes, times were different. 😉

This book is exciting. For someone like me who is just getting into the hobby, it was full of information. More important, it was full of enthusiasm. Stine was an advocate of the hobby and he was energetic in his writing about it.

Some of what was presented here is a dated. I suspect hand-eye sighting for altitude is not used much these days. All the trigonometry to calculate various things is no longer done. I know K-sized motors exist. Only G are discussed here.

Nevertheless, a whole of topics were raised that I had not even considered. And while I doubt I will ever build a model to scale from research I conduct, it is fascinating to know this is an area of the hobby. I was equally fascinated with the depth of glide recovery systems. That seems like a larger field of the hobby than I would have thought.

Having finished this book, I am even more eager to begin.

View all my reviews

Almost 20 years ago I recall finding myself in a hobby shop near the apartment I lived in at the time. I believe I purchased a rocket for one of my nephews for Christmas or his birthday. I recall thinking, “This would be a neat hobby.” Somewhere around there, someone at the school I taught at had a parent come out and demonstrate a rocket launch. I am not certain, but it may have been a water rocket. I just don’t recall, just a vague memory.

Advance forward until a year or so ago. I began thinking that rockets might be something Fritz and I could do together. Nothing materialized.

About a month ago it was announced that the Scouts would be building a rocket to launch. Unfortunately, Fritz’s group was considered too young to do so; we built balsa airplanes instead. The following week we went to see the rockets launched. Very kewl! I thought that Fritz and I could do this. I visited Michael’s, Hobby Lobby, and that same hobby shop I visited nearly 20 years ago. I learned a little about the hobby. I began reading online.

I am not a crafty person. I decided the “Ready to Fly” kit would be best. But the weekend got busy and we didn’t get one. Then my sister came for a visit. Fritz and Beetle were in their school performance. In lieu of flowers for Fritz, his aunt wanted to get him something else. I suggested a rocket. He was so excited!

Today was her last day visiting. We put together the “Ready to Fly” rocket and headed out. It was cold and breezy. Making the connections with the alligator clips was a touch tricky, but eventually the thing shot off. Very kewl!

It flew away from us with all the wind. Beetle retrieved it. The parachute was all tangled and we were cold so we headed home after one launch. That was just fine; the rocket flew and it was neat. I look forward to future flights. Rockets are fun! 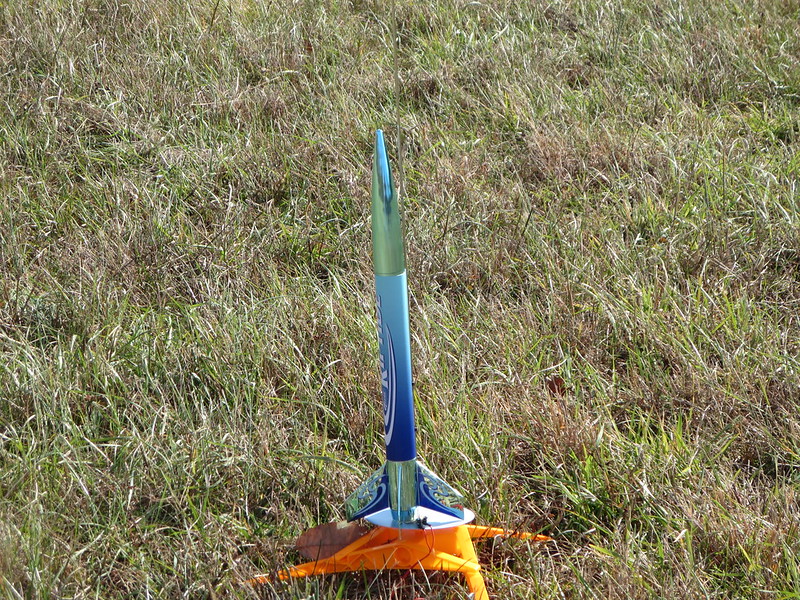