While I voted for Gingrich in 2008, I am not excited about his candidacy or anyone’s this time around. I like Paul’s domestic policies, but have trouble with his foreign policy. Gingrich is coming off as a loose cannon; Romney is a limp fish; no one else is a serious contender . . . The last couple years I have come back to ice hockey after a long absence. Last year when we subscribed to HD, hockey became a lot better to watch on television. Today I gave myself the gift of watching the alumni game for the Winter Classic. Ah, the memories. The NHL has done wonders with this event over the last five years. Outdoor hockey is awesome! Seeing 66-year old Bernie Parent stopping breakaways again is good for the game! . . . Hiking the last few days in 50-60° is just fabulous . . . The Wii is good family entertainment . . . Damn, I missed getting the trash out this morning. We are piled up like never before. It’ll be next Saturday before we can unload. Ugh! . . . Trying to avoid the year-end recaps and resolutions. It’s all filler . . . BTW, Clue is still a classic game. Beetle received this for Christmas and we have played many games this past week. Wholesome, clean, thinking, fun. Yup, we’re fans . . . I know it was a joke, but Chris Christie did New Jersey no favors by “threatening” Iowans Jersey style (remember this post?) . . . I liken NYE celebrations with those who highlight geocache finds that end in zero; it’s so damn arbitrary. How about we celebrate 11 April? Something is more likely to occur that day than 1 January . . .

A new public school superintendent who publicly criticizes the idea of capping his salary at a rate of the governor of the state amid this horrible economy demonstrates he just doesn’t understand public policy. If a public school superintendent doesn’t understand public policy, then perhaps he doesn’t have the correct job . . . I enjoy my job; I like teaching. Yet, I loathe that I am public employee. It’s not that being so is inherently bad, but it is difficult to overcome the fact that my profession is a big clog in the efficiency of government . . . It’s interesting that when a union negotiates on behalf of its benefactors members, it will not disclose the terms it is requesting from management. Disconcerting is only the beginning of the emotional flow . . . Copyright is a weird thing. I can’t post an Annie Leibovitz photograph on my site. But what if Ms. Leibovitz took a photograph of me with my own camera? Who owns the copyright when you are on the boardwalk and ask a stranger to take your photo with your own camera? . . . The coverage of the game on the NHL Network is far superior than Comcast’s coverage. One is a professional entertaining broadcast, the other is boring . . .

It was a Friday. It was a different time. The Olympics still resonated with folks. There was still the “amateur” status of the United States players. The Games were still held but once every four years. Miraculously enough, these games were played here in the United States.

A few years earlier the Soviet hockey team came through the States on an exhibition tour. They dominated the NHL . . . until they landed on Broad Street. Ed Van Impe set the tone with his hard check that knocked out Valery Kharlamov, the top Soviet player. The Soviet team left the ice in protest that no penalty was called. They returned after they were told they would not be paid if they didn’t.

Nevertheless, in 1980, there was no doubt who the best team was. The Flyers would not be fielding an Olympic team; American colleges would.

The team played well. And there, 29 years ago today, they found themselves in the semi-final game against the dreaded Soviet team. This was still the Cold War era and the tensions were great. Only a few months later, our Summer Olympic team would protest the Games held in Moscow. Most of the Soviet Bloc, including the Soviet Union, returned serve in 1984 by protesting the Summer Games in Los Angeles.

I recall watching the game in my parents’ bedroom. They had the big color television. I believe the only other television was a 13″ black and white, although my sister may have had a television in her room by then. As I recall, it was an afternoon game.

It was an amazing thing to see. Our amateurs against the finest team in the world, and we won the hard fought game. Al Michaels delivered his famous line, “Do you believe in miracles?” as the game wound down. It was an emotional moment for the United States. It still chokes me up when I see that. It was a sense of American pride. It’s too bad Michelle Obama didn’t think so.

I am not a huge fan of Michaels, but he is to be heralded for his exclamation point question that he dotted this momentous occasion with. More important, however, the team is permanently etched into Americana.

Finally, Herb Brooks was the glue that held this mish-mash of players together. 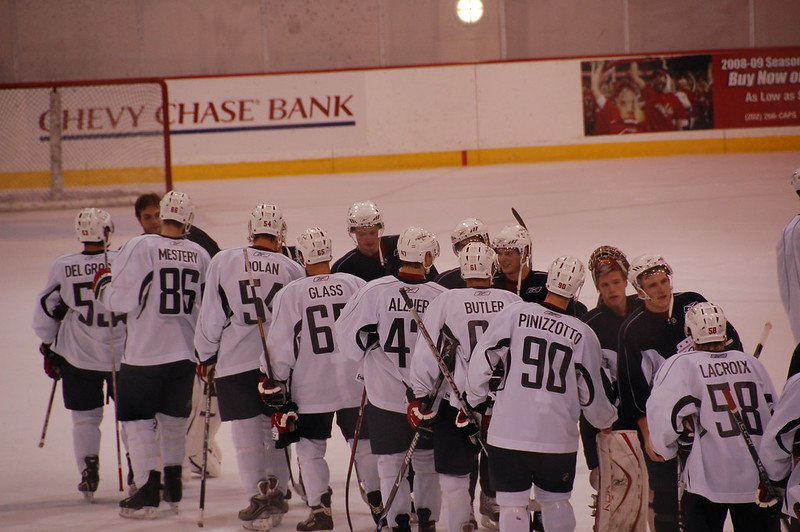 Uncle Mike is a big Washington Capitals (hockey) fan. The team held a fan fest today at a mall in Arlington. Being a season ticket holder he had a reserved spot early so he could purchase used player equipment. He bought a pair of skates. The rest of us met him later in the morning to participate in some of the other activities.

Beetle had her face painted. We had freshly popped popcorn and cotton candy. Then we headed over to the bouncies. There was an obstacle course. Beetle called it a castle. It was just a tad too difficult for her. She did fine, but would not go through the maze as she couldn’t make a path. The guy running it was very good and pulled back a section so she could go through.

Then it was to the regular bouncy. There was a time when Beetle would not go in these. That is all in the past as she had a blast! I enjoyed the jazz band that played.

We went in and watched folks ice skate. There had been a hockey game in the big rink earlier. All of the Capitals’ prospects played.

Uncle Mike and Aunt Kim taught Fritz to raise his arms to the chant of Let’s Go Caps! Fritz liked that. By the end of the day he was saying Let’s go. He’s so cute!

We had lunch and then headed home. Aunt Kim and Uncle Mike took the children from our hands. I went out caching for a bit. I saw lots of deer.

We all met up back at the house for another dining experience. Aunt Kitty showed up too. She was in town to find a place to live now that she will be re-locating to DC. We dined at an Italian place nearby. Unfortunately, things did not go well.

Our children were off their schedules. Beetle had remained awake very late the night before and had not napped today. She was off at dinner. Fritz kept yelping. The owner was very good to us . . . and patient. But things got worse. Beetle had an accident and Fritz just would not settle. It was too late to be out. I took Fritz outside where he played with the rocks.