A comment about The Dick Van Dyke Show posited that it was a top-5 all-time sitcom. That got me thinking . . . what are the top sitcoms?

I’ve toyed around with this list. No list will be perfect. I can envision this will change over time. But right now, I think this is a fair representation of my list.

Train wreck: Christine O’Donnell talking to Geraldo . . . John Maxwell seems to be like all “famous” public speakers; in it for a buck. After listening to a two-hour telephone call I was left unimpressed. And he wants $5,000 for his speech program? Ha! . . . A few months later, Pinterest has lost its appeal to me . . . I don’t understand why a Kindle version of a book is more expensive than the printed copy. It makes no sense to me . . . There is a lot of hay about Big Bird right now. Many people claim that the poor would lose important education if Big Bird were defunded by taxpayers. My experience is that the majority of the students I teach have not watched Sesame Street . . . I love the smell of smoked turkey on my fingers . . . Ridiculous! Greg Gutfeld hosting The Factor undermines Bill O’Reilly. Next time just have the body language lady fill in. This supports the thesis that cable news is merely entertainment television . . .

Headlines such as Millville police charge mother and son with selling crack do nothing to instill confidence in our community . . . Hey, I was mentioned in an article about GPS games recently . . . Another murder in Millville. This is no place to raise a family . . . Anybody else growing tired of staged reunions for our returning military? No disrespect, but the set-ups at schools, ballfields, etc. are boring. Just show up at home, privately, and embrace your family. Leave the media alone . . . A master has passed away: Carroll Shelby who designed the Shelby Cobra and juiced up the Mustang died. A Shelby is a prize vehicle . . . This Mother’s Day I am sitting in the back living room. Fox News Sunday is on (volume 33 on the scale). My wife is running the shower above me. My son is singing to the computer in the front living room. Yet, above all that, I hear the roar of the Grand Am cars at NJMP . . . When a mother has to apologize for her son, you know you have done wrong. Colton from Survivor should be embarrassed . . . 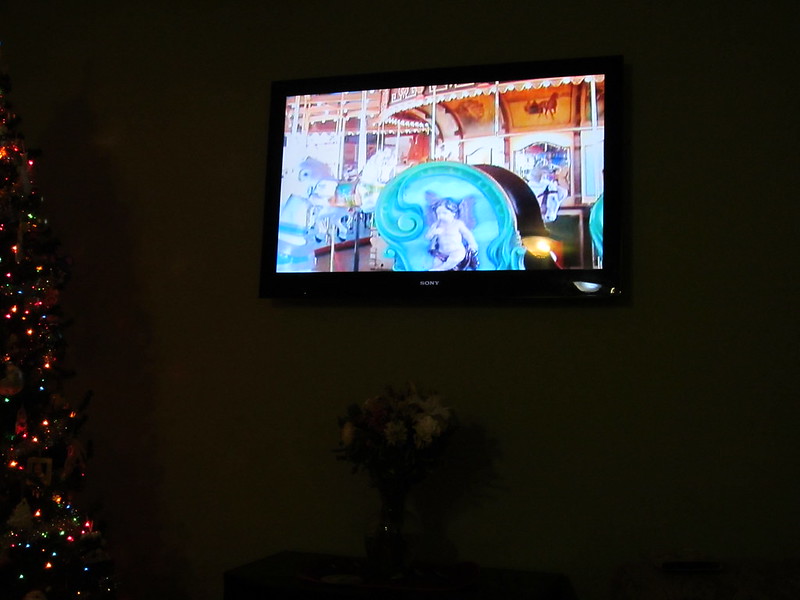 Sometimes I’m a little slow on figuring things out. A year ago I purchased two flat screen televisions. One of them has Internet capabilities. Streaming content has not worked quite the way I envisioned it. With the PS3 player that came free with the purchase I am able to get some stuff. Netflix works just fine. Of course, I stopped our account a few months ago since its streaming content is lacking. I did see every Rockford Files episode before I halted it. There are a couple free services that work too. Again, old movies, but some good stuff. I don’t pay for Hulu, so that is off limits. I am able to stream YouTube content, particularly my own channel. Searching is clumsy, however.

Anyhow, I got an idea tonight that I began to work on. That didn’t work out as I had planned. So I looked something up. Well, blow me down. It seems that rather than having the television grab content from the network like I’ve been trying, I can push content to the television from my laptop.

Now we’re watching home movies. Yeah, this is pretty kewl! It only took a year, but it’s working. That’s what matters.

I had linked to this video several years ago, but it was pulled.

Without a doubt, this is the finest piece of Thanksgiving comedy ever created. Enjoy!

Ouch! While mowing the lawn (oh, it was high!) I felt my left calf tighten. It seemed odd, but I had been working hard today and even added a hike in the middle. Anyhow, when I stepped down off the deck I felt a pop/rip of the calf. I am rather certain I have injured myself to the point I will need outside help . . . Went for a cache today with Fritz. As soon as we got to the cache area, Fritz let go with the nastiest diarrhea ever. Oh, it was worse than anything the babies ever did. I had to hose him off. Seriously . . . We didn’t find that one because of his mishap. It rained for about 15 minutes today; the entire hike back to the Jeep . . . Finding I have less and less to say online these days. Twitter and Facebook are rarely loaded . . . I wasn’t surprised at all that Huckabee passed on running. I suspect Palin will pass too. Despite protestations otherwise, it is a weak Republican field . . . Have been buried for the past six weeks with stuff. There appears to be no let up until school is over. That means another six weeks of no time to scratch an itch . . . I would not have voted for Boston Rob on Survivor. I would have voted for Natalie or Phillip. The puppet master should have been held accountable for the manipulation he used . . .

I just finished watching the last episode of The Rockford Files. Six seasons (five and a half really since the last season was truncated). It was the impetus to order Netflix. I enjoyed reliving my youth as I saw the fashions change from 1974 to 1980.

Here’s another benefit to my new television!

It’s less expensive than the Extra Innings package and I can stream this to any computer I am at or my cellphone. In addition, every game is archived so I can go back and watch anything, save the Phillies due to blackout rules, at any time. Woo hoo! I’ve wanted to score every Phillies game for a season. With a DVR, I think this is possible this year. We shall see. If not, perhaps I will score some other team. I am thinking of adopting the Oakland A’s as a team to follow this year. I like following a west coast AL team as well.

Out of all virtues simplicity is my most favorite virtue. So much so that I tend to believe that simplicity can solve most of the problems, personal as well as the world problems. If the life approach is simple one need not lie so frequently, nor quarrel nor steal, nor envy, anger, abuse, kill. Everyone will have enough and plenty so need not hoard, speculate, gamble, hate. When character is beautiful, you are beautiful. That is the beauty of simplicity.