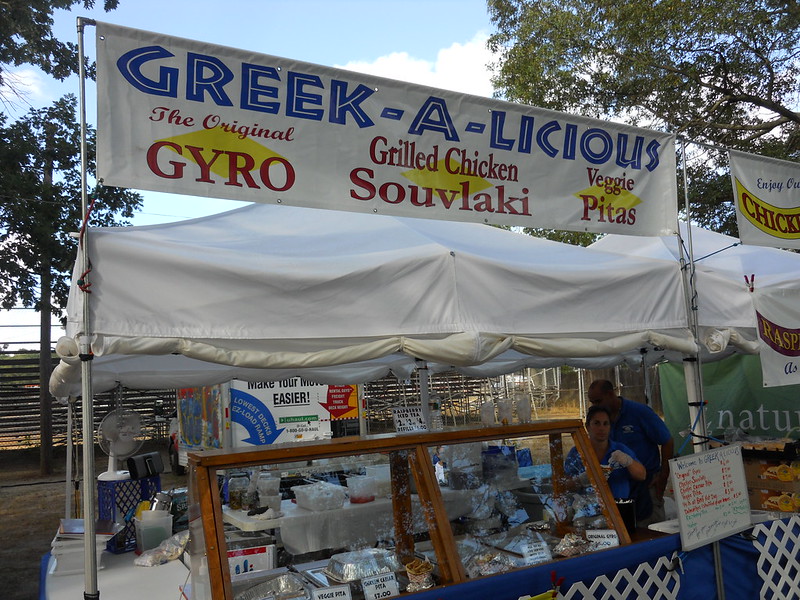 I read this in an article about low attendance at the Cumberland County Fair . . .

First-time fair vendor Dean Margarites of Monmouth County said he likely will skip setting up his Greek-A-Licious stand here next year because of poor sales.

“If I have something else going on, I’ll probably stick to something closer,” Margarites said.

As far as I am concerned that will improve the fair. Greek-a-Licious served me the absolute worst gyro I have ever eaten . . . Several years ago I noticed that BlogNetNews.com had picked up eCache in its feeds. It’s an interesting site, although it never generated much traffic here. A couple years ago the url for eCache changed. I contacted them to update it several times. They never did and I stopped trying. Just now in one of my feeds, I stumbled across this site again. I too a quick look. Not only have they not updated my feed, they have me classified as liberal. Bahaaaawwww . . . “Terrell Owens says he’s concerned teams are swayed by the perception that he’s a troublemaker and that’s why none have signed the free-agent receiver.” You think? I will be sorry to see Terrell retire. Since we have the same surname, my students always feel a kindred spirit. I use T.O. as an example throughout the year whenever my students fall into “me first” mode. We pound our chests just like the clueless one. Who will I use when he is no longer relevant? . . . Newspapers employing paywalls is poor business, imo, but Lancaster Online has taken the cake. Their new model uses a paywall only for obituaries. After reading seven obits, one will have to pay for the eighth. Yeah, that will work . . . Scoble is a media whore. He’s been pimping his “secret” all week. We’re all impressed . . . The other evening the handle fell off my Weber Performer. The grill is eight years old. The handle had rusted. I e-mailed the company, forwarded photographs, etc. In the mail right now to me is a replacement lid and thermometer free of charge. Weber has outstanding customer service . . .

SaveJersey.com is a site that I feel I should read, yet while it is verbose, there is rarely anything of note . . . Now that the contentious municipal election has passed, the outspoken folks who turned up trouble are noticeably MIA . . . Atlantic City must be smarting. It was October 2007 when The Sands was imploded. This week The Sands opened a new casino in Bethlehem, PA (two hours away) . . . Towns are revolting against Corzine tax cuts. Towns are now lobbying to relax state mandates until the state funds them . . . I’ve been researching paella. Looking forward to dabbling in this soon . . . Corzine’s campaign kickoff will kick citizens out of their polling place. This is just really bad politics . . . I thought President Obama was putting the Blame Bush Doctrine in moth balls, but apparently he is going to govern with this strategy for his entire term . . . Corzine’s lead article on his re-election site is the best laugh in a long time: The Most Responsible Governor in Decades . . . I am not certain how I feel about the upcoming Sherlock Holmes movie. I’m a fan of Robert Downey, Jr. and I like breaking out of the mold of the traditional Holmes look and feel. But this does appear to add far more action to the story lines than I expect. We shall see at Christmastime . . . Returning the Colorado 400t for repairs. I am half hoping for an upgrade to an Oregon . . .Today is Smoke Day V.  I have totally messed up my schedule by not rubbing the pork butts last evening, and then I took forever today to get to it.  I’ll be up all evening smoking . . .

Carla Katz is going to radio? The program director stated, “She’s smart, she’s candid . . . ” The first question to her should be What was in the e-mails you and Gov. Corzine swapped? . . . I stumbled across Eliabeth’s Edible blog a while ago. She cooks nice-looking food. Her chicken marsala has hit my To Make list. That looks fabulous . . . President Obama stated on his television show at his press conference the other day, “And Churchill said, ‘We don’t torture,’ when the entire British—all of the British people—were being subjected to unimaginable risk and threat.” The thing is, Churchill never said it . . . Rocketboom switched hosts again. What happened to Joanne? Caitlin looks way young, as my mother would say . . . If you are old enough to be licensed to drive, you are old enough to have your name in the paper when you are ticketed for careless driving . . . A local loudmouth gets his comeuppance at the hands of Emil Van Hook . . . We left Allstate last fall when we realized we were being gouged.  Ended up shaving about half of our auto insurance bill.  I suspect the next move for Allstate is to leave New Jersey as its government-approved 8.9% hike on premiums will drive away even more customers . . . How bad is it in New Jersey?  Cory Booker, a liberal mayor, is on record that the state cannot afford its own goverment . . . Apparently, President Obama will release one photograph of the plane that scared the hell out of New York last week after it said it wouldn’t yesterday.  So, instead of picture being worth 1000 words, we now know it is worth $328,000.  Another reversal for this administration.  They are stumbling way too much, and one photograph is not enough . . .

All the outrage about the signage of the new hot dog and Chinese restaurants on High Street seem much ado about nothing. While not the most fashionable, they are identical to Chow’s Garden on 2nd Street . . . Speaking of crappy signage, the vinyl banners the post office and Bojo’s are flying reek of cheap . . . Fox News is pissing me off. I actually remembered to tune into Fox News Watch tonight. You guessed it, not on again . . . I am pruning my RSS feeds again. Time to get rid of some of the stale blogs and replace them with some new energizing blogs . . . Doing the same with Twitter . . . It’s good to see Roberto and Ken blogging again . . . Phillies won a good game tonight . . .

The best thing to hit the blogosphere in some time is Barack Obama’s Teleprompter’s blog. I don’t care who ya are, that’s funny right there . . . Peggy Noonan nailed the problem with Obama so far: Leadership is needed here. Not talkership, leadership . . . All the troubles with Ticketmaster sure makes me happy I don’t go to concerts these days. The fees lopped on top of the ticket are ridiculous. Distributing tickets doesn’t seem to be that complicated of a system that there shouldn’t be competition . . . Along with Ticketmaster, the Garden State Arts Center (or whatever it is called these days) is charging a parking fee per ticket, whether one parks a vehicle at the venue or not. This is what is so scary with a lot of liberal plans. Desire everyone to go green, but tax them nonetheless. It’s ridiculous . . . Dodd Man Walking . . . I’ve never understood why folks link to their sites that are private. I ran into a signature today on a site that linked to MySpace site that is private. I have no issue with private sites, but why advertise them? . . .

There are some that will say I am a nit-picker. I have mentioned that I have enjoyed the break from political blogging since the election. There is so much emotion that gets caught up in the issues that sometimes reason takes the backseat.

The story du jour is the report that the presidential limousine that is being prepared for Obama is not a green vehicle.

The armour-plated car, which has a raised roof, windows up to 5in thick, extra-strength tyres and a body made of steel, aluminium, titanium and ceramics, is thought to be based on a GMC 2500 truck that gets less than 10 miles to the gallon. Three cars are believed to be in production so that two can serve as decoys.

It sounds exactly like what I expect a presidential limousine to be. But that doesn’t keep this story as an opportunity to blast the President-elect:

I like Michelle Malkin, but what would she propose? Shouldn’t POTUS be protected?

Yes, I adhere to different rules for different folks. The President is deserving of a vehicle that can withstand bombs. Me? I don’t need those features. I imagine that the equipment to deliver the security needed to withstand a bomb has a price on fuel mileage. And I am okay with that.

Despite not favoring Obama in the election, he is my president. I want him to be safe. His safety is important to my security. Folks are more likely to target him than me so his vehicle should be better than mine. I am more than fine with that.

It seems that politics is devoid of reason too frequently. It does not make Obama a hypocrite because he espouses high fuel standards and has a gas guzzler as his security vehicle. Guess what? I bet Air Force One is also poor on fuel economy. Should we equip him with a glider instead?

Hammer someone’s politics on real issues. There are enough things to pick at without inventing controversy. This is what is so frustrating being a news junkie; it is easy to forget what one’s standards are.

Last August Robert Scoble was pumping Facebook so much he decided he would create content that was only available there. Many (including yours truly) took him to task for that. His response? He replied via Facebook.

Advance to today . . . all of a sudden Facebook is evil because it is rumored to be on Microsoft’s purchase list.

This is a fight for the Web. We all just crawled inside a box that locks Google out.

Do you see a Facebook entry there? Nope. Google is locked out of the Web that soon will be owned by Microsoft. We will never get an open Web back if these two deals happen.

Listening to Scoble is frustrating. It is akin to listening to Dick Morris pontificate on Fox News. When the story changes, so does his perspective.

Amanda Congdon is set to return to the Internet . . . errr . . . well, I suppose she has never left, but she’s back beginning tomorrow with her daily Sometimes Daily vlog. I can’t wait.

For those of you who haven’t followed Amanda, she began as the hostess of Rocketboom, then drove cross-country in her hybrid, released some homespun videos, blogged for ABC for a year, and has been MIA (kind of) since.

Sometimes Daily is her much-anticipated return!

In the past I have extolled the virtues of Rocketboom here at eCache. It’s been a while since then. Amanda left in a bitter falling out with Andrew. Joanne was hired, and while I have nothing against her, she didn’t have the same presence that AC did.

I still tune in to Rocketboom, but it is not a daily thing, more like once a week or so I look over and see if anything interests me.

The other day I received a message that Andrew is now following me on Twitter. I thought that was kind of neat. I wonder what I wrote that caught his attention. Hmmm . . .

Anyhow, before I clear the iPod tonight, I am running through some podcasts that are sitting here. This is the kind of RB that made me first like it so many years ago. And Joanne has definitely come into her own.