It’s always nice to be recognized. When I was rather young (five or six), we were in Philadelphia and went to the Franklin Institute. One time was on a Sunday. For whatever reason, Dad didn’t go inside. Being in a wheelchair kept him out of some places although I’m sure there were elevators at the time. We listened to the Eagles play the Cardinals in the car while we waited. I am sure it was Pat Summerall and Tom Brookshire with the call. It seems like an odd place for us to have done so as a tour of a museum wouldn’t be 30 minutes.

Anyhow, at another visit to the Franklin Institute, again I was pretty young, I recall being mesmerized by the Foucault pendulum. It hangs five stories in the middle of the orginal staircase. It is something to behold. Behold it, I did.

This is the first thing I recall really capturing my attention. Being me, I had a slightly different infactuation with this than most, it seems. The pendulum swings back and forth. As it does, it knocks over pawns that resemble pieces from a chess board. Obviously, after a day, those pieces need to be rest. That’s what I wanted to do! Yes, it seems odd, and I suppose it is, but that was always something that I wanted to do.

I have visited the museum countless times over the years. Each time, I take a look at the pendulum and fantasize. Then I began visiting the museum yearly as that was the destination of our field trip for many years. To prepare my students, I would inform them about the pendulum and my secret desire.

Then, out of the blue, I was provided a fellowship at the museum. We met twice yearly.

Yesterday we were sitting around chatting after one of sessions. We were asked if there was anything we wanted to see or so at the museum. I shared my very strange request. They laughed, looked at me oddly, and discussed it with me a bit. Later, I was told to arrive at the museum early, before our sessions would begin.

I was escorted to the basement with the head of our program, a photographer, and someone from artifacts. I had to wear gloves, but yes, I would be able to set up the pins. Everyone thought it was silly. It’s a chore to the museum. To me, it was truly a dream come true!

The pawns were not what I thought. I envisioned solid metal. They aren’t; they are hollow and quite light. That is so the pendulum will actually knock them over.

I had to work quickly. The pendulum was not stopped, so I had to set up a piece or two, get out of the way as the pendulum swung back, etc.

It’s nice to be able to act on dreams no matter how silly they are. I cannot thank the museum enough for providing this opportunity.

I am a guy who likes to be involved in efficient, well-run projects. I analyze things and set a course. That isn’t always well received.

The man heading our fellowship left the museum in the fall for the Liberty Science Museum. The fellowship plowed ahead with the second-in-charge. By the time we convened for our second weekend together, some issues were on the table.

Most fellows felt as the museum had not come through with the initial promise of technical help. We thought graphics would be created as needed, etc. and that certainly was not the case. In addition, we were told that what had been asked for was too time-consuming. That coupled with the appearance that some fellows were getting more assistance than others, began to come out in some of the discussions.

Then there was the issue that one of the fellows had been stealing code from others. When that was brought up, nothing was done. That did not sit well with me.

I was the only fellow who drove to the museum; everyone else was flown in from afar. On my drive back home from the February meeting, I stewed, as I am wont to do. One of the comments tossed about during the weekend was that not everyone had equal HTML skills and could not jazz their sites up like others. This was, in part, directed at me. One of the big issues with this group, as I was to learn, is that style was held in more esteem than content. I decided to address that.

Look at this blog: black and white (more or less). I have always liked the combination. I decided on the ride home to create a black and white site without any frills to submit for my June project.

I forget if Hazel, Karen, and I had already decided to team up again or if that came later. I do know I shared that I would have another site I would submit. They were fine with that.

I really like mnemonics. In mathematics, to help students recall the order in which to complete the operations, teachers use the mnemonic Please Excuse My Dear Aunt Sally.

While linear, I really like this little site I created. The puzzle at the end, unfortunately, cannot be updated as I no longer have control over that site. Note the puzzle though. I have been working on creating a similar style puzzle for geocaching for several years.

I wrote the site on that Sunday afternoon in February, but it was not published until 1 June.

As I recall, the Franklin Institute contacted The Daily Journal regarding this article, to gin up interest in the felllowship. Because of that, I acquiesced and spoke with the reporter.

As a fellow with the Franklin Institute this year, I had three projects to complete. The other two fellows publishing on my schedule were Karen Walkowiak and Hazel Jobe. I knew of Hazel prior to our work together for some of her good work in Tennessee. She was the video conferencing educator expert at the time in that field. The museum had provided us with webcams and the three of us had struck up a friendship during the first several months with the webcams as well as ICQ. Later when I met Gert, she was taken aback initially that anytime one of these ladies would message me, the computer would speak Karen’s Here or Hazel Has Messaged Me.

As we published our first project, we began looking ahead to March. As we mulled over our ideas, we decided to collaborate on a project together. After running it by the museum to ensure it was okay with our decision, we began working on Shamrock Lane.

This is the first web project I ever collaborated on. Looking back with experience and many other projects under my belt, the first two projects I completed with these two ladies were the most satisfying I participated in.

As with of all of our work, we do not have access any longer to it. So, the javascript used to present the date has now been wrong for seven years. 🙂 It drives me nuts, but the museum has no desire to have the content updated. So be it . . . 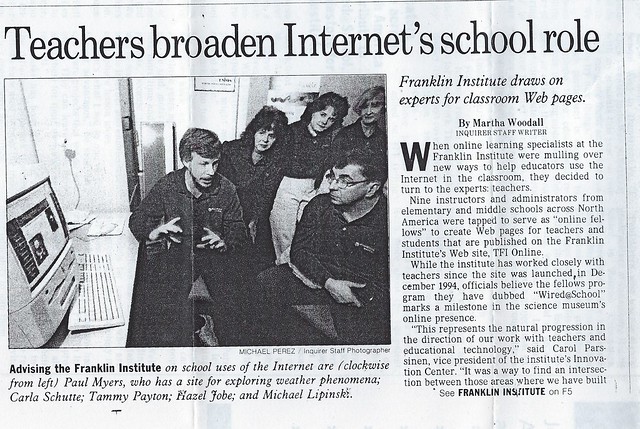 The Philadelphia Inquirer ran a nice piece about our fellowship at the Franjlin Institute Science Museum.

My first project for the fellowship with the Franklin Institute Science Museum was published today. It was an exciting time.

Our projects during the 1998-99 academic year were to complement the Living Things exhibit that the museum was working on at that time. I decided to chronicle our study of the Delaware Estuary, which culminates with a sail aboard (New Jersey’s official tall ship) the restored oyster schooner, the A.J. Meerwald. For that sail, the Franklin Institute sent one of their web designers to join us. He digitally recorded the sail for a few pieces I ended up using for the site that I created. That was very neat. Digital cameras certainly were around, but digital video was just coming to the consumer. This was my first project using it.

I was pleased with how my site came out. There was some content (the folks with the schooner were very accommodating in that regard). This site was used by many classrooms in my district prior to their study of the estuary. Each fourth grade classroom here studied this material. In addition, all sorts of classrooms in the Delaware Valley used this site as I heard from many over the years.

Since this was published, the Meerwald has come online. The fellowship is long gone and we have no ability to edit our work any longer so this sits there out-of-date. The first meeting of the nine fellows for the Wired@School fellowship with the Franklin Institute Science Museum began this weekend.

We gathered Friday evening in an upscale hotel a couple blocks from Logan Square. While nice, my room was a smoker’s room and reeked of smoke. Yuck! One of the fellows returned once and found her door ajar. Despite the appearance, we were not particularly pleased with the lodging.

Friday evening we met and then all traveled to a restaurant across the street from Jack’s Firehouse.

Our meetings yesterday and today were wonderful. Steve Bauman, the head of our project has opened a very wide door for us. Seemingly, we will have a team to assist us to create our projects. Wow! A graphics person to spruce up my work like I had always dreamed of! I am impressed.

We have broken the group into three groups of three. The first group will publish their first (of three) projects in October, the second group in November, and the third (my group) in December. We all outlined, tentatively, what our projects would encompass so as not to step on one another.

We are all very excited, but perhaps a bit nervous as we have a lot of work ahead of us.

In other news, two of our embassies were bombed this weekend: one in Dar es Salaam, Tanzania and the other in Nairobi, Kenya.

Out of the blue, I received a letter from the Franklin Institute Science Museum in Philadelphia. I opened the letter and was floored with the contents. The outline of an innovative fellowship was described and I was asked to participate!

The fellowship, Wired@School, sought to assemble classroom teachers who were using technology in their classrooms and provide them tools to create projects that could be used in a variety of classrooms.

It sounded so exciting!

Nine of us were selected. Eight were from the US and one from Canada. I recognized a few of the teachers as some of us were part of a few discussion boards and projects already.

The Franklin Institute had taken note of our classroom web site earlier in their Caught In the Web recognition. Interestingly, the first sentence of that review is inaccurate as we went online in the spring of 1995. 14-A was an innovative site. Rather than just post student work, we provided interaction, which was something not being done at that time. Our traffic was heavy. In addition to TFI, USA Today wrote about us as did several magazines and a few Internet books. We were seeing 100,000 unique visitors per month. It was all very exciting. The students were online celebrities in many ways.

I felt honored to be asked to participate in this fellowship. The summer was spent signing contracts and meeting the other fellows online and then eventually in person in Philadelphia.