The older I become, the more I realize that political opponents merely talk across one another; there is not even the appearance of understanding the other side.

Yesterday I received my monthly union rags. Sigh . . . it is a disspiriting read every month.

The NJEA Reporter ran a piece about NJ Senator Robert Menendez’s address to the union at the local convention.

Menendez lamented cutbacks to public education at the state and local level. He explained that he introduced the Teachers and First Responders Back-to-Work Act in October to address those shortfalls. The legislation would have provide $30 billion, saving approximately 400,000 jobs. The bill was offset by a 0.5 percent tax on incomes over one million dollars. According to the senator, the measure failed because Republicans in the Senate opposed the tax.

“Think for a moment of what that says about their priorities,” Menendez said. “They want to protect the most fortunate among us from having to pay half a penny on every dollar they make over a million dollars, rather than protect the jobs of 400,000 public employees.”

Here are my problems with Senator Menendez’s position:

2. Menendez claims $30 billion would save 400,000 jobs. Since the money was not spent, that must mean that 400,000 public employee jobs were lost. Document them. It is either true or not. Let’s see the data of these lost jobs.

NJEA would do much better if it recognized its members would prosper more if the federal government were removed from the equation.

What I do not understand, however, is the federal government’s role in the issue. The boondoggle, otherwise known as Amtrak, is a drain on the public’s collective wallet.

New Jersey Transit does send some trains to New York City. We know the buses run across the rivers too. Local blogger Mark Krull likes to detail his commute to Philadelphia. Even so, I think it is a stretch to think the Commerce Clause kicks in here. Surely, New Jersey and Pennsylvania (or New York) can make arrangements to accommodate each other’s vehicles without the federal government.

Not according to New Jersey’s senators. Senator Menendez and Lautenberg have introduced a bill in the US Senate to spend another $2 billion. What would taxpayers receive for this additional tax? Lower fares for public transportation.

Since the start of last year, 84 percent of public transit systems in America have either hiked fares, slashed service or are considering one of the two.

Those entrenched in the government solve the problem by raising taxes. That’s what Menendez and Lautenberg seek to do. Others self examine. Is public transportation a program government should run? Perhaps it is. But if it continues to hemorrhage tax dollars, a fix needs to be found. Here in New Jersey, fares were raised.

I find it interesting that some politicians continue to pitch tax increases as the solution to problems. Obviously to the Garden State’s senators, they feel as though we are not taxed enough if they are comfortable asking for $2 billion.

What say you? Do you concur that you have more money in your wallet to send to Washington, D.C. to distribute to states to lower public transportation fees? How much slippage will occur with the feds involved? 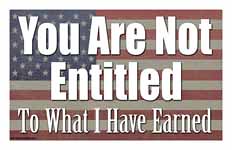 aka I’m mad as hell and I’m not going to take it anymore!

Originally I thought I wouldn’t be able to attend a Tax Day Tea Party because of work, but lo and behold, I’m off that day.

I was still on the fence, but New Jersey Senator Robert “I Haven’t a Clue” Menendez convinced me to attend. One has to be deaf, dumb, and blind not to realize that the citizenry is not pleased with government spending. Even The One’s budget is scoffed at by his own supporters. So what does Clueless do amid all this? Menendez announced New Jersey needs more stimulus money.

The one thing that we learned from Depression-era economics and the responses to that era was that being meek ultimately created a longer depression,” Menendez said. “Being bold is what was necessary. There’s already a discussion right now, even as the stimulus package unfolds, as to whether or not we will need another stimulus package.

A fool. A damn fool.

These guys just don’t get it. And now I’m going. I will be at Love Park in Philadelphia on Wednesday to voice my displeasure.

Something has to be done. Will my lone voice make a difference? Nope. But it needs to begin somewhere. Reason is not prevailing, so footsteps need to hit the pavement. I will be part of the solution . . . somehow.

I am dismayed at how Senator Menendez represents the great state of New Jersey.

I wanted to take this opportunity to update you on my work in the United States Senate.

It’s unfortunate that there was something that precluded the senator from updating us on his work. My fifth grade students know this is poor English.

The above is how Senator Menendez greets visitors to his site. The poor English continues.

Issues such as strengthening our ports, securing our chemical plants, transportation, energy independence, and healthcare – to name a few.

Senator, will you kindly identify the predicate in the above? Here’s a hint for you sir; your spew does not rise to the level of a sentence. Again, my 10-year old students write better.

Your lack of attention to detail has been noted.

The Daily Journal endorsed Tom Kean for the US Senate today.

It all boils down to questions about ethics.
. . .
Menendez has denied wrongdoing, but these questions reflect a business-as-usual attitude all too prevalent in Trenton and Washington, D.C.

We can do better. We must do better, and we believe Republican state Sen. Thomas Kean Jr., who was a strong advocate for pay-to-play reform in New Jersey before it became fashionable, can be an independent voice of moderation in a U.S. Senate divided by partisan politics.

We’re suppose to believe that Senator Bob Menendez, already under investigation for kickbacks from millions he lobbied for on behalf of his renter, didn’t know that his personal friend Donald Scarinci strongarmed Oscar Sandoval into hiring a doctor “preferred by Menendez or risk losing $1 million in contracts with Hudson County.”

Interestingly, the online version of this article does not display all of what was in the printed copy of the paper Friday.

Yesterday, he [Menendez] achieved further distance from his friend when the senator’s daughter, Alicia, resigned from Scarinci’s law firm. Alicia Menendez, a recent Harvard Law School graduate, quit after learning of the tape.

“She felt that given everything, it was appropriate to no longer work there,” Miller said.

But, Menendez said yesterday he remains a close friend of Scarinci.

Menendez’s daughter shows enough class to distance herself from Scarinci, but her father, an unelected senator, who is trying to win his first statewide election cannot. Sure, Scarinci left the payroll of the Menendez campaign, but he’s seedy enough to remain friends with.

This, dear reader, is your U.S. senator. This is the man who wants you to vote for him on 7 November.

He’s being investigated by the federal government. His close friend is on tape pressuring a psychiatrist to hire another friend stating that Menendez would consider it a favor. And now he wants to still socialize with his friend and not call him on the carpet for the heap of trouble he supposedly brought to the embattled senator.

This does not pass the sniff test. Anyone who had done that to me would be publicly rebuked. Boss Bob, however, does no such thing.

Even Governor Corzine is trying to get Scarinci away. The Press of Atlantic City reported today that Corzine

would strongly encourage the Casino Reinvestment Development Authority to cease doing business with this individual.

Surely, there is someone who can lead us better than this.

if I ever thought even with an ethical approval that this would become the distraction it has become in this campaign, I certainly would have thought about it twice and would not have ultimately pursued it.

Wow! The only thing wrong Menendez sees in renting property to an agency he lobbied for our federal tax dollars is that it has become a distraction in his current campaign. That is very much like the child who states his only regret is that he got caught.

Menendez has an ethical dilemma.

Of particular interest is Governor Corzine’s support. Corzine appointed Menendez to fill the seat the governor vacated when he stopped showing up for work was elected governor. Last month he said goodbye to his Attorney General. For a man who ran on a platform of cleaning up state government, the governor surrounds himself with questionable people.

To question the federal probe into the land deal tells me Corzine is more interested in politics than in cleaning up government. That means that the citizens of New Jersey are dismissed yet again by this administration.

New Jersey is once again spotlighted by the antics of her representatives. Today, non-elected US Senator Robert Menendez put forth an amendment that would suspend the federal gasoline tax for two months. The reasoning offered is to provide an economic break to Americans as the price of gasoline has jumped significantly at the pump.

To pay for the $100 million daily savings to taxpayers, Menendez wants to temporarily rescind tax breaks to oil companies.

Last year the big oil companies hiked gas prices and blamed an act of God, but it’s crystal clear that the current spike in gas prices is at least partly due to an act of greed

NJ Conservative, just today, called upon columnists to back up their claims with evidence. The same is expected of our representatives. Menendez has stated there is price gouging. It is very easy to sit on the sidelines and point to record profits and price increases at the pump. Yet, from all I am reading, it appears that the two are unrelated. Price increases are based on futures trading and that is outside the scope of the oil companies.

Nevertheless, where is Mr. Menendez’s proof? I think it is highly reckless for a sitting senator to inform his country that it is being gouged without providing a scintilla of evidence. Is this really how you expect to be represented?

If Menendez truly believed this was good for America, why only two months? Shouldn’t he be in favor of totally removing the federal gasoline tax and putting the load on the big bad oil companies in perpetuity?

Me? Why not repeal those federal gasoline taxes and keep the breaks in for the oil companies. Instead of five percent growth this quarter, perhaps we would hit double digits. 🙂

Wouldn’t that be the best thing for the American taxpayer, Senator Menendez?

Okay, so I have never heard of Strategic Vision. It appears they are a company for hire. Yet, their latest poll puts Tom Kean, Jr. ahead of Robert Menendez in November’s election for US Senator.

Okay, so it’s only a slight lead.

Okay, so there is a huge undecided population.

But, it is a lead.
(Hat tip to Taegan Goddard)