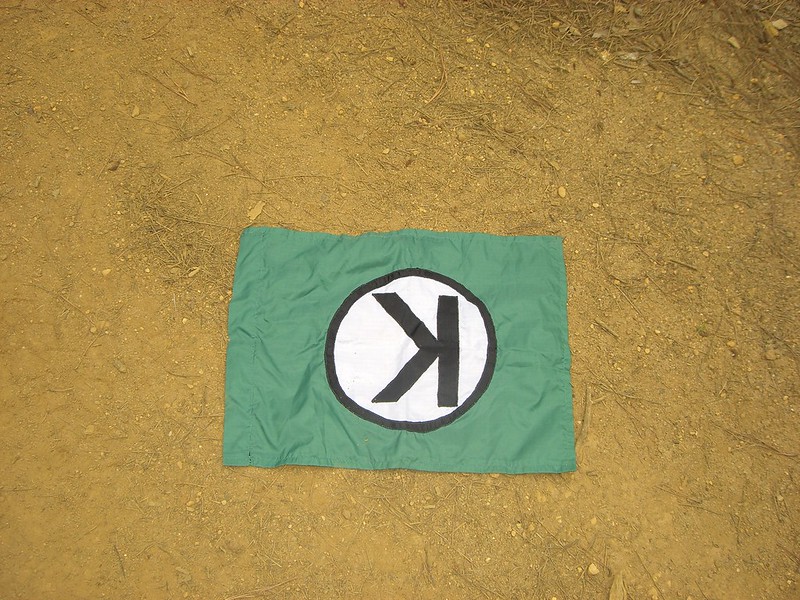 Today had been a big GPSr day, and this was the last stop on our adventure. Fritz and I stopped here on our way home to meet the girls.

This journey demonstrates one should stick to his plans. It turned out to be exactly as I thought from the reconnaissance I had done. But, before we learned that, we went way off road to find a very strange thing. I am not certain if it is a new development being built or a sand dig, but something was up there. We were somewhat chased by a big bull dozer. It seemed municipal-like, but the clearing looked very organized. Whatever . . .

We were looking at a 1.7 km jaunt that way. But when we were stymied, it looked like it was going to be a DNF on this one. I checked the GPSr. There was only one other waypoint not gotten today and that was the vexillum 32 km away in the wrong direction. Fritz and I decided to circle around on our way home. What could be the harm?

And indeed that was the correct decision. We turned up Sixteenth Street. I half expected it not to exist. In some ways it didn’t. Sixteenth is a hard-packed road with but one house right near Rt. 50. I turned off on the fourth cross street. Again, streets, is a liberal use here. There is a perfect grid, but this is the woods folks and nothing is marked. I crossed road parallel to Sixteenth and then followed my cross street as it bent toward Rt. 50 and then parallel to it.

Not too far in we zeroed out! This is the local dumping ground and I can imagine many a beer is consumed back here. Nevertheless, we arrived safe and sound.

Fritz was so excited he celebrated by snoozing. I backed the truck up to GZ so he could hoist the flag!

After snapping some photographs, it was home we rushed to meet our girls and have a wonderful dinner.

The eldest child acted up today. My dear wife had had enough. In order to make the peace, I suggested taking the children out for some GPSr fun. This is not usually a move that is welcomed by SWMBO, but she so wanted a nap, she quickly agreed. Fatigue is on my side. 🙂

Anyhow, with an infant boy and Little Miss Muffin in tow, we headed westward for our adventures.

This flag was easily captured along Rt.49 just inside Bridgeton’s border. Right at the corner of Coral Ave. is a pale green (real pale) rancher. I pulled over onto the shoulder and was six meters away. The flag played on the front lawn.

On our return trip sometime later, I noticed there is a cute red fire plug at the corner here too.

I continue to play the chaos strategy in this game. We shall see how it works.

Well, after a day that I had wanted to go out with my children, but woke up feeling ill, then got to doing yard work (the front flower bed is looking pretty good right now, my friends), and finally cooked dinner (the scallops were divine and the asparagus was just heavenly), I settled into my chair. The IRL race is delayed so I started looking at some stuff online. I remembered I hadn’t played today, so I took a quick look at the map and where it was convenient for me to play. I have adopted the chaos strategy for this game; we’ll see how it serves me.

I ended up on a road that to the best of my knowledge, I have never been on before. Piercetown Road branches off of Fairton-Gouldtown Road in Gouldtown. I scored this outside of 21 Piercetown, a yellow rancher with a car port out back. It seems to share a driveway with 23 Piercetown. The flag played a little closer to that property, but I didn’t want to hang out here as there were folks about.

Welcome to the game!

Inspiration, move me brightly
light the song with sense and color,
hold away despair